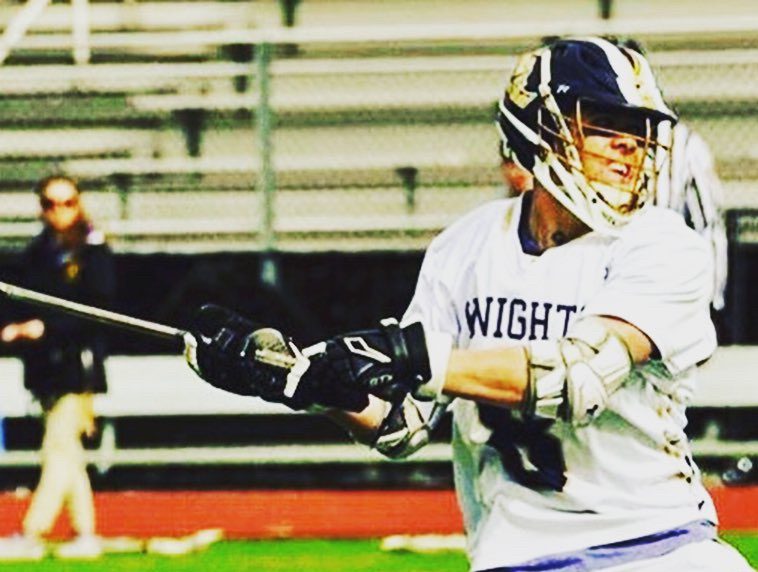 Last fall, he ran for 1,615 yards and scored 23 touchdowns for the Golden Knights, and was named first team all-league and First Team Daily Local News All-Area.

“I’d have to say football was my favorite sport throughout high school, but it absolutely shredded my body,” Madonna pointed out.

He played three sports and earned nine total varsity letters at Rustin. And it would have been 10 if not for COVID-19, which wound up forcing the cancellation of his senior season in lacrosse.

“There is nothing like crossing the line to score a touchdown under the Friday night lights,” Madonna said. “I love lacrosse, but I’ll miss football for the rest of my life.”

At 5-foot-9, 180 pounds, Madonna decided long ago that he needed to pursue a college career in lacrosse, where he was a three-time all-league and all-area pick at Rustin. When he ticks off the list of injuries he sustained while playing high school football – including two separated shoulders, several concussions and numerous sprained joints – it’s easy to understand the decision.

“I got hit a ton. After a Friday night football game I would be sore the entire weekend. After a lacrosse game I was good in a couple hours,” he recalled.

“It had a huge impact on my body. I have the skill but I don’t think I have the size to play Division I football.”

The West Chester native committed to the U.S. Naval Academy nearly two years ago. He will attend and play lacrosse at the Naval Academy Prep School in Rhode Island this fall, and then plans to transfer to Navy for the 2021-22 academic year.

“My grades were decent but they weren’t good enough for me to go right into the academy,” he explained. “So I’m going to the NAPS in Rhode Island – it’s kind of like redshirting.”

Madonna began playing lacrosse at the age of seven, following in the footsteps of his older brother, Andrew. Nick was a prodigy heading into Rustin, and in three seasons amassed 97 goals and 55 assists in 56 career outings. With 152 career points, he is second on the program’s all-time list, only 50 behind R.J. Zoba.

“I was going to get it this season, for sure,” he predicted.

“Not being able to play my senior year of lacrosse is heartbreaking, but it definitely made me thankful for the three years I had.”

As a freshman and sophomore, Madonna actually played lacrosse and was simultaneously a sprinter for the Knights’ track squad. He was a very promising runner.

“I remember going to lacrosse practice and then leaving to go to a track meet,” he said. “It was just too much, so I eventually focused on lacrosse.

“I think I probably could have run track in college if I stuck with it. It got me in shape for other sports, but I didn’t enjoy it as much as football and lacrosse.”

It certainly didn’t take long for Madonna to develop into one of the area’s top two-sport stars. He was named a team captain in both football and lacrosse for his season year.

“Nick may be the smoothest and most naturally gifted lacrosse player and athlete that I have coached,” said his coach, Kevin Philibin. “He can get to his spots almost at will, is a legitimate two-way midfielder, can stretch a defense with his outside shooting, and there are very few players who can stick with him in the open field.”

Speed was always a big part of Madonna’s arsenal, and it was instrumental last summer when he earned a spot in the Under Armour All American Lacrosse Tournament in Baltimore.

“Speed is huge in football and lacrosse. I was never the biggest kid but I always had the speed,” he said.

“The agility I developed in lacrosse helped me with football. Doing split-dives in lacrosse is very similar to trying to juke someone in football.”

When asked to pinpoint one overriding reason for his success in lacrosse, Madonna said that he loves the game so much, he wants to work on it outside of organized practices and workouts.

And ever since the cancellation of the 2020 season, he has added weight training to his daily routine.

“I never really stuck to a strict weight lifting schedule before,” he said. “It’s hard to stay self-motivated, but I am sticking with it.”

SENIOR WEEKS: Downingtown West’s Beebe was poised for huge year with her senior six-pack
SENIOR WEEKS: Unionville’s Keenan puts baseball career in his past, looks ahead to well-traveled future after