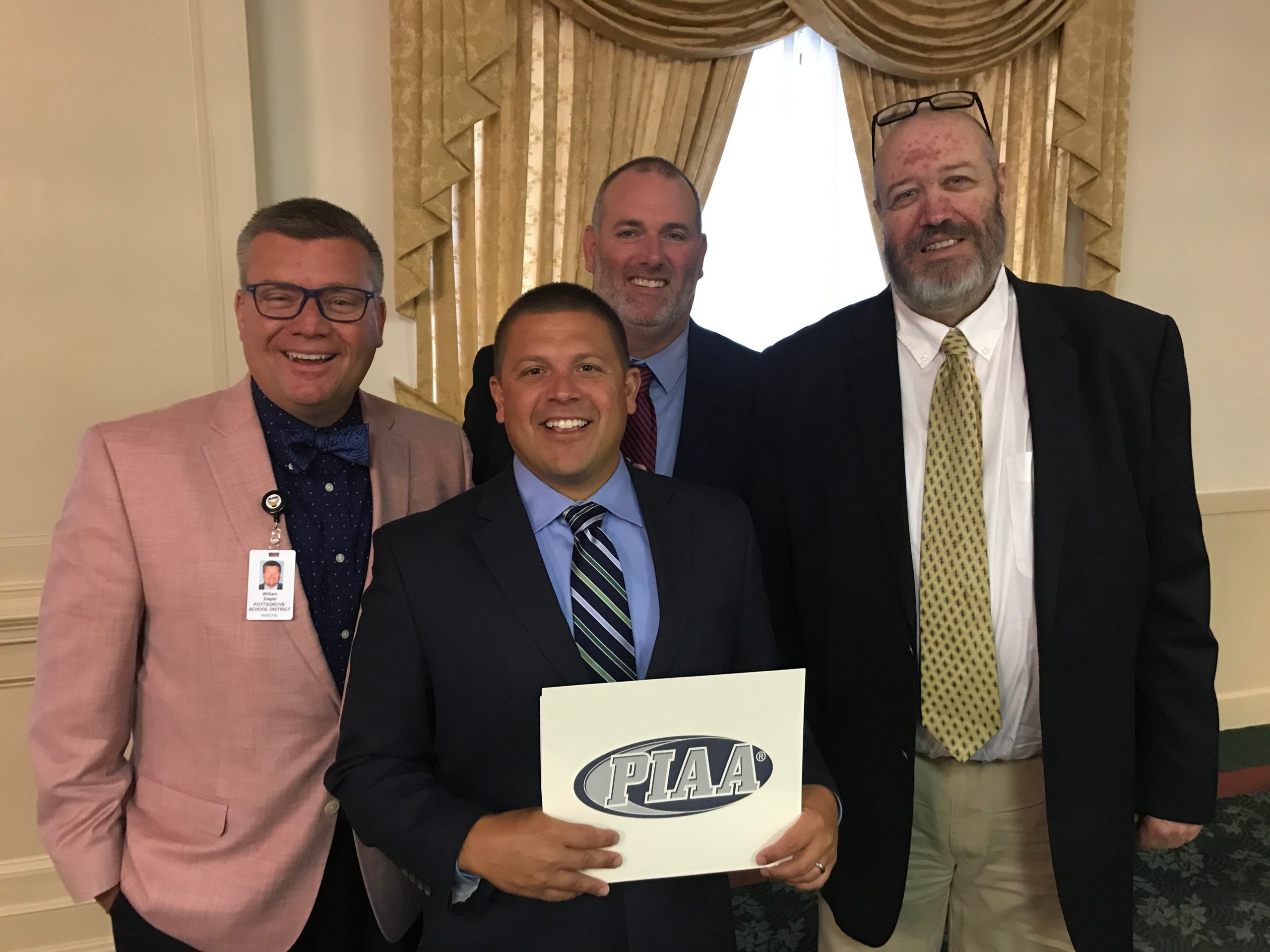 They’ve been spirited sports rivals for many years. But the Spring-Ford and Pottsgrove school districts are now united in sadness, mourning the loss of athletic director and trainer Paul Exley.

Exley died Wednesday following a battle with cancer. A graduate of Spring-Ford in the late 1970s, he was 58 years old.

With the news of his passing spreading, prominent individuals from both communities remembered a man described by one person as a “happy, loyal and dedicated gentle giant.”

“In what I believe is the most vulnerable age in a student-athlete’s development,” Derenzo said, “I saw in Paul the combination of truly caring about our kids at that developmental age and also giving them the confidence and guidance to help those students move past the community league mentality to scholastic sports achievement, where everyone earns their place. Additionally, he earned the trust of every coach, both at the middle school and ultimately the high school, because of his dedication well beyond the defined hours of the job.”

Exley is survived by wife Lori and sons Charlton and Kile.

Exley started at Pottsgrove in 2005 as a part-time emergency medical technician (EMT). He continued in that role until 2013, when the middle school’s assistant AD, former teacher Gary Reichenbach, retired.

“I appointed Paul to both positions,” Derenzo said. “Many were very critical in this selection because those two positions were never combined. But what I saw in Paul was a very competent medical presence, combined with an ability to connect with people.”

Anspach lauded Exley for both the demeanor and positive impact he had on the Pottsgrove School District.

“Paul was a Pottsgrove Falcon through and through,” Anspach said. “He had such a positive influence on anyone that he came in contact with. There wasn’t a day that I can remember where he did not have a smile on his face. He truly loved being around student-athletes, coaches and athletics.

“He had such a great influence on our community. Paul was all about ‘paying it forward’ and going above and beyond for athletes anyway possible. I was always amazed how calm he would be regardless of the situation. He had a way to make any situation positive.”

While a Pottsgrove School District tweet stated “He might have graduated from Spring-Ford, but he will forever be a Falcon,” Exley’s roots to the Twin Boroughs (Royersford/Spring City) community were just as sturdy; his involvement in his hometown’s sports programs also extensive.

“I have known Paul for a long, long time,” Spring-Ford athletic director Mickey McDaniel said, “and the first thought that comes to mind is class and integrity. He was a professional in all of his endeavors and was well respected by his peers and casual acquaintances.

“He always put the youth of our community first in his operation of the Spring-Ford Babe Ruth Baseball program. He will be sorely missed.”

Dan Miscavage, a resident of Royersford and Spring-Ford’s assistant athletic director, had dealings with Exley through the Spring-Ford Babe Ruth baseball program. He was also coached in basketball by Paul back in the 1990s.

“Paul Exley was a man who worked very hard for the kids in the SF community to run a Babe Ruth program for years,” Miscavage said. “I dealt with him through the permit process, and he always talked passionately … to keep kids playing baseball that otherwise would not have had the opportunity.”

Onetime SF athletic director Dave Caldwell had Exley on his boys basketball coaching staff in the 1990s. He remembered Paul as someone who was “always smiling and upbeat around everyone.”

“He loved being involved in the schools and working with student athletes,” Caldwell noted. “I always enjoyed catching up with him.

“Will greatly miss the happy, loyal and dedicated gentle giant.”

Miscavage also claimed the distinction of having Exley as one of his coaches around that time.

“I for one will miss him dearly,” he said, “and so will the Spring-Ford community.”

Exley was also credited by Anspach for the feelings of sportsmanship he fostered at Pottsgrove in his time there.

“Over the last few years, our middle school and high school have been recipients of the Pioneer Athletic Conference Sportsmanship Award,” Anspach said. “Paul was one of the major factors as to why we received these awards. As our student-athletes start playing organized sports in seventh grade, he had a craft of educating them on all the important values of athletics right from the beginning.

“Sportsmanship was always his number one priority. You would know that from the minute you came in contact with Paul as one of our athletes, coaches or even from the opposing school.”

“I remember telling him that I would be coming up to the middle school for an issue, or something that I believed needed my attention and his response,” DeRenzo said. “‘Stay at the high school, you hired me to run this part of the program, let me do it. You coming up here just clouds the issue, If I need you I’ll call you,’” was Exley’s response.

“That may have been the first time in my career (31 years as an AD) when I just sat back in my office and kind of chuckled and thought ‘This guy was absolutely the perfect guy for the job.’ He owned everything he did, and he did everything ethically and with conviction and always put our students well being first.”

Exley was also lauded for his presence on the sideline for high-school football games even though it wasn’t required for him to do that.

“His help Friday nights was appreciated,” Rick Pennypacker, the iconic head coach of the football program for almost 30 years, noted. “He was always there, helpful. He didn’t have to come to the games, but he did.”

“Paul was always there for the kids and sports,” current football head coach Bill Hawthorne added. “‘Selfless’ encapsulates what he was.”
Exley’s willingness to help out at football games in various capacities resonated with Jack Thomas, the school’s head athletic trainer.

“When I think of Paul Exley,” Thomas said, “three things come to mind: One, he was so proud of his family. Two, he was one of the most dependable guys that I know on both a personal and professional level. I do not recall if we ever heard the word “no” out of his mouth. Three, he was selfless, always putting others wants and needs ahead of his own.”

Another measure of Exley’s character was how he approached life after receiving his cancer diagnosis. He was diagnosed with Stage 4 rectal cancer in March 2018.

“As he was battling cancer, I knew there were days he would come to work and did not feel great,” Anspach recalled. “To no surprise, he would find that smile and energy to give 100% to our student-athletes and programs. That was Paul.”

“I could write so much more about this man … his deeply religious beliefs, his wonderful family, etc.,” DeRenzo said. “In all my years in public education, there are few who stood for the things that I hold near and dear to my own soul; Character, Trust, Honesty, Ethics, and above all, Loyalty.

“He was, and will always be in my mind, the epitome of what a human being should stand for: A classy, decent, loving human being who put others before himself … A totally selfless man who made everywhere he went better than how he found it.”