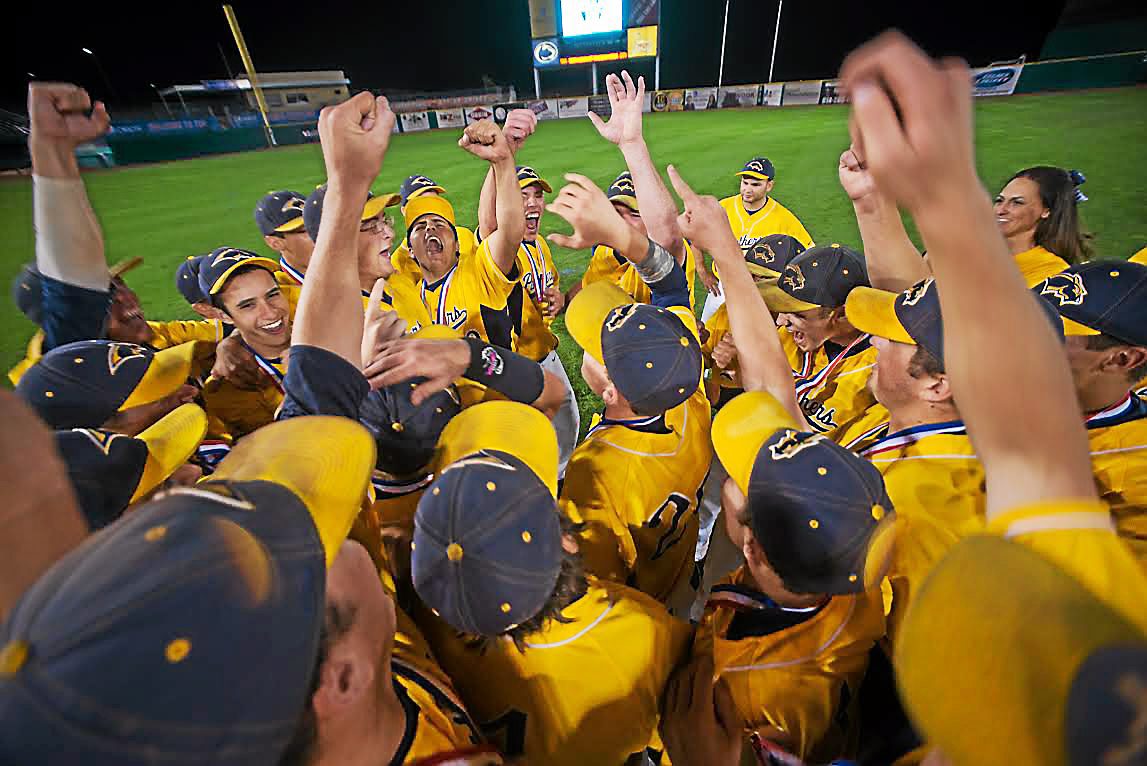 Upsets were the theme of The Reporter/Times Herald/Montgomery Media Baseball Team of the Decade Tournament quarterfinals and the Pioneer Athletic Conference was the main reason.

Three of the four matchups in the round went to the lower seed, with a pair of 2014 PAC squads – No. 14 seeded Methacton and No. 7 Pope John Paul II – knocking off PIAA champions to reach the semifinals.

Also advancing with an upset was fifth-seeded 2013 North Penn while No. 1 2010 Germantown Academy also moved on to the Best of the 2010s final four.

Voting to decide which two teams move on to the final begins Tuesday on The Reporter Sports Twitter account @ReporterSports.

Methacton players and friends crowd together for a selfie after the Warriors baseball team earned their first District One title in 2014. (Rick Kauffman/MediaNews Group File)

Methacton, who won their first-ever PAC and District 1 titles in 2014, didn’t get a chance at La Salle that season – it fell to conference rival Spring-Ford in the state quarters 3-2 before Spring-Ford lost to eventual Class 4A champ La Salle in the semis.

The Warriors, however, did face their next opponent – fellow conference member Pope John Paul II. The 2014 Golden Panthers, who won the PIAA Class 3A crown, ended the run of second-seeded 2015 North Penn as PJP topped the state 4A champ Knights in the quarterfinal’s closest contest 53.4% to 46.6%.

Methacton and Pope John Paul II played three times during the 2014 season. The teams split a pair of regular-season matchups – Methacton taking the first 11-7 March 24 while the Golden Panthers won a 6-4 contest April 14 – while the Warriors edged PJP II 1-0 in the PAC title game May 14.

It took until the top of the seventh inning for the Warriors to score the lone run in the conference final, the Warriors’ Kyle Lowery called safe at home on Patrick O’Neill’s bases-loaded infield grounder. John Wiedmayer proceeded to finish off his two-hit shutout in the bottom of the frame and Methacton had its first PAC baseball title.

Both teams went on to win District 1 titles – Methacton in 4A, Pope John Paul II in 3A – while the Golden Panthers postseason went all the way to the PIAA title, beating Harriton 4-2 in the state final in State College.

North Penn just got in the 2013 District 1-4A field – the 12th and last North seed – but advanced to the quarters to qualify for states, where it went on to capture the program’s second PIAA title and first since 2009.

Knights right-hander Brian Maher threw a trio of shutouts in the postseason, his third coming in a 3-0 win over SOL Continental rival Pennridge in the state semis. NP then won the PIAA final by topping Lower Dauphin 6-5 in nine innings – Bobby Scott’s single scoring Eddie Posavec for the walk-off victory.

SENIOR WEEKS: Conestoga’s Merrill wonders what could’ve been after working to perfect his swing all winter
Reporter/Times Herald/Montgomery Softball Team of the Decade: All set for the semis