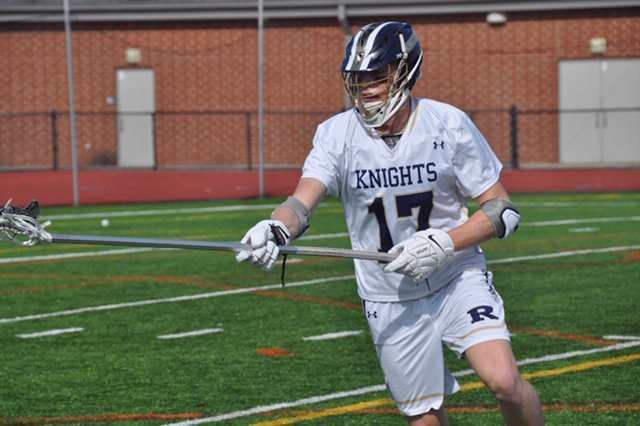 “I was told about it the day of the tryouts,” Montgomery recalled. “I wasn’t on anybody’s list, but that kind of motivated me to make the team.”

Not only did Montgomery make the team, he played well enough to draw the attention of numerous college recruiters. The experience wound up convincing the West Chester native that his athletic future would be in lacrosse, instead of football, and eventually helped him landing athletic scholarship at Division I Delaware.

Following a breakout junior season with the Golden Knights in 2019, Montgomery decided to participate in every summer lacrosse tournament and camp he could find.

“And it absolutely elevated my game,” he said.

“In the beginning of (last) summer I was still looking to play college football, so I got a late start on lacrosse recruiting. I felt like I had to make up for the time I lost.

In fact, Blue Hens’ head coach Ben Deluca and his staff, first became aware of the powerfully-built Montgomery in the spring of 2019 while recruiting fellow Rustin defender Collin Hurley. Hurley is now preparing for his sophomore season at Delaware.

“Matt put in the work to get to where he is,” said Knights’ head coach Kevin Philibin. “He’s a natural athlete who is incredibly coachable and smart on the field. He really understands the ‘why’ of things we teach and absorbs everything we go over.”

Even though Montgomery wound up losing his senior season to the coronavirus pandemic, he is now fully committed to lacrosse.

“I kind of got sucked into it and thought I was going to play football in college,” he said. “But I realized that I absolutely loved lacrosse, I’ve been playing it my whole life, and I wanted to be playing it every single day.

“I don’t have any regrets. Playing football elevated my game. I was kind of an average to above average defender in lacrosse until I started playing football. The program at Rustin really makes you buy-in, where you want to work harder. That brought me to a new level as an athlete.”

At 6-foot-3, 210-pounds, Montgomery was also a four-year swimmer Rustin. As a freshman, he played soccer for the Knights, but quickly switched to football as a sophomore, and went on to be a two-time, first-team, All-Ches Mont American defensive end.

“I was OK at soccer, but it wasn’t my thing because I enjoyed hitting people like in lacrosse,” he explained. “So I switched to football and … boom.”

With stay-at-home guidelines in place, this spring has been a shock to the system for just about everybody. For someone like Montgomery — who competed in three sports throughout high school years – it’s been downright surreal.

“I lost my senior season, so I don’t have that to build on heading into my freshman year of college, which is one of the most important years,” Montgomery said. “So I have to take it upon myself to do the work without having anybody else around.”

He sets aside an hour or two every day for solo workouts that include running, pushups, sit-ups, weight lifting, etc. And Montgomery keeps busy as an essential worker: he is a cashier at Giant.

“Whenever I have free time, I watch game film (of lacrosse),” he laughed. “I know it’s kind of lame, but I like to see what my (opponent) is doing. It’s one of my favorite things.”

With Montgomery and fellow seniors like Nick Madonna and Delaware-bound Jake Spaniak leading the way, Rustin was poised for a breakout lacrosse season in 2020 before it was cancelled.

“We’ve been building for this season for four years,” Montgomery said. “We had the chemistry going, everyone was clicking, and the younger guys were really buying in to the program. It was shaping up to be a big season, so it was a punch to the gut.”