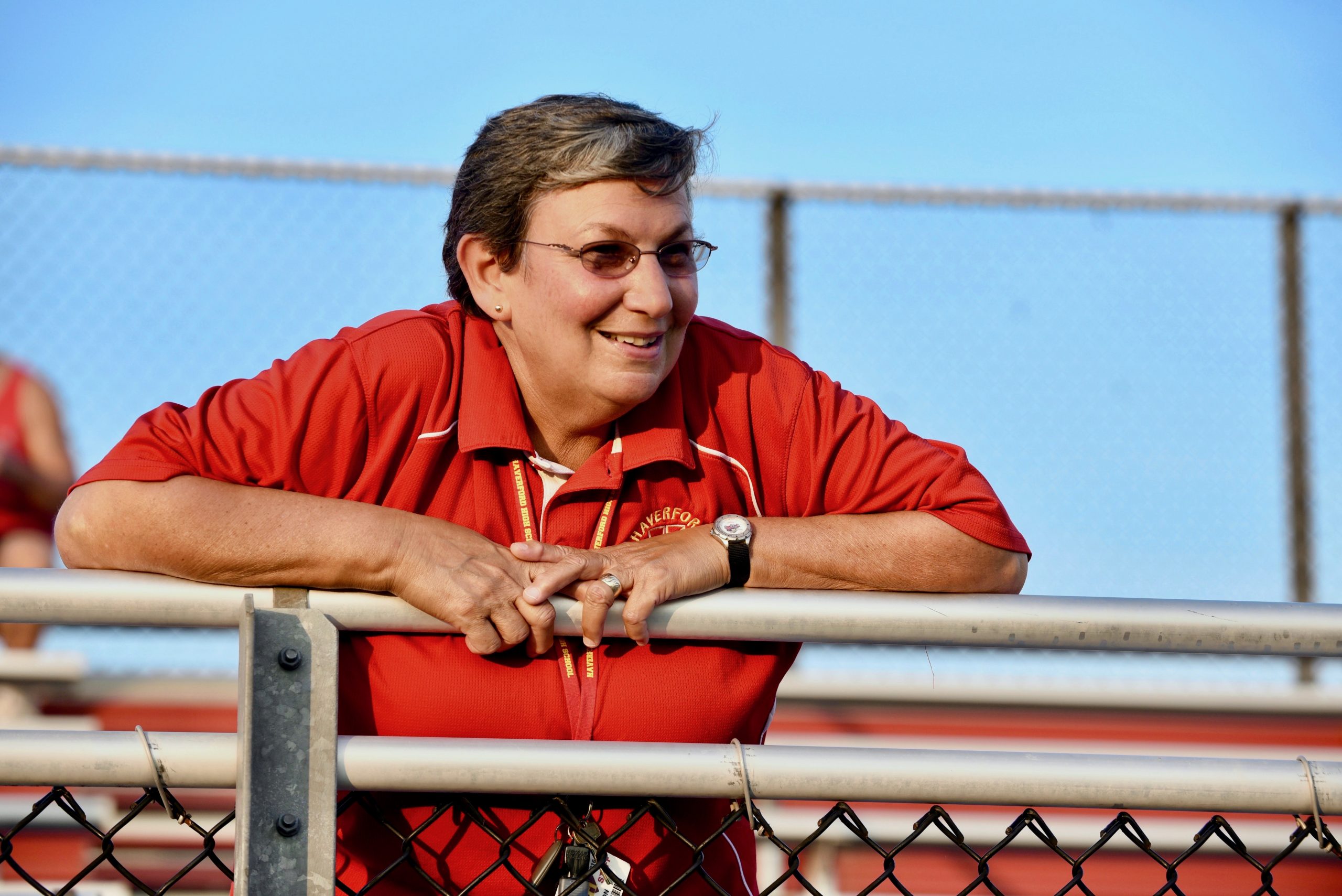 When Gina Buggy took over as Episcopal Academy’s athletic director in the early 1990s, the Inter-Ac League was structured differently, the blue-blood institutions treating their boys and girls leagues as separate but parallel entities.

The alignment forced Buggy to pull double duty in overseeing a co-ed institution. One day, she’d be in conference with the ADs of all-boys institutions like Haverford School and Malvern Prep, the only woman in the room. The next, it would be a meeting with all-girls schools like Springside School and Agnes Irwin, a room that would be all women.

Buggy’s competitiveness, which took her to the international ranks as a field hockey and lacrosse player, didn’t allow her to be daunted by either environment.

“You’re a little bit outnumbered, but I thought it was a great opportunity to get a different perspective from people and learn from the people around me,” she said. “I think as the years went on, I started to appreciate more deeply the opportunity I was given.”

Nearly three decades on, that disposition has served her in leading a school known throughout the area for its athletics.

The 2019-20 school year marks a planned if unceremonious ending for a pair of veteran athletic directors. Both Buggy and Haverford High’s Joann Patterson are retiring. Patterson’s departure is effective Sept. 1.

Both shy away from the intimation that they’ve blazed trails. But the unprecedented circumstances shrouding what should be a joyous coda underscore the longevity each has achieved.

Buggy’s entrée to being an athletic director was, naturally, the field of competition. She began at Episcopal Academy 34 years ago as the field hockey coach. In 1993, she became the AD.

She brought to the job the same passion that made her a field hockey standout at Plymouth Whitemarsh and Ursinus, that led to a bronze medal from the 1984 Olympics in Los Angeles. Her coaching career ended last fall with 479 wins, 13 Inter-Ac championships (nine outright) and two Pennsylvania Independent Athletic Association titles.

“The fact that I went to a high school like Plymouth Whitemarsh at a time where there were really successful athletic programs and successful female coaches, it started me on a path to where I had a high expectation of what you could accomplish as an athlete,” she said. “In those accomplishments, I learned a lot about the resiliency you need, the work ethic you need, the sense of team, inclusion and just accepting challenges and getting knocked down and getting back up. All the clichés that we continue to try to teach kids through sports, I feel really blessed that I could learn them at a young age.”

Spending 26 years as an athletic director is impressive. Attaining that tenure at a school where parents pay five figures per year in tuition (with the attendant entitlements some believe come with the price tag) is an almost unfathomable stretch. But Buggy has navigated it with her drive and curiosity, always looking toward the next challenge.

Case in point: The school that first hired Buggy was located in Merion. Among the highlights of her career is overseeing the move to Newtown Square, after the school sold its old campus to Saint Joseph’s University in 2006. It was a unique and unheard of experience that Buggy relished.

“The best thing about it was that you knew once you got through the struggle of it and the uncertainty of it, you knew that you were going to be able to offer the student-athletes better opportunities to grow and evolve through athletics,” she said. “There was a bright light at the end of that tunnel.”

The focus on athletes has helped sustain her. She admits she hasn’t given much thought to her ending at Episcopal being blighted by the pandemic. Buggy enjoyed a sendoff in the fall, going out with a PAISAA win in her final field hockey game. She’d called time on her career on her terms, a privilege she doesn’t take for granted.

But the enforced time away from campus has given a glimpse of what she’ll miss in retirement.

“There’s no doubt about it, I’m going to miss the day-to-day interaction with the student-athletes, with the kids,” she said. “I’ll miss our coaches. I know now looking back at it and not being able to do it this spring, how much I enjoy watching athletes compete and understanding that three years ago, this was a kid on the team who maybe didn’t even get off this bench, this was a kid on the team who was on the quieter side and a mediocre athlete and now is a leader and a good athlete.

“Watching that kid that never thought they would grow the six inches or develop the speed, and just watching the development of the student-athletes and reflecting back on from where they’ve come, I enjoyed that so much.”

Patterson’s career retrospective, she makes clear, comes with a proviso: The story shouldn’t be about her. That’s not what guided her through more than a decade in athletic administration before she took over as the athletic director at one of the area’s largest districts in 2010. It’s not guiding her at the end, either.

So it’s no surprise that when you ask for her thoughts on this spring season that wasn’t, they gravitate toward anything and everything but her retirement.

“As a whole, it’s been extremely disappointing,” she said, before rattling off the on-field highlights she had looked forward to. “I really think this would’ve been a good spring for us. … I think we would’ve had a fantastic spring as the kids go, and my heart’s broken for these seniors. Just the fact that they cannot get on the field. This should be about these poor kids, not about me or anybody else.”

But it’s precisely that devotion that makes a look back at her accomplishments so salient. A former basketball player and coach at Widener, Patterson began as an associate athletic director in 1998. She moved toward the operations side and occupied numerous league and district leadership positions, particularly for girls sports like lacrosse and basketball. She headed the District 1 committee in girls lacrosse and has led that sport in the Central League for years. A large part of the heavy lifting on scheduling and arrangements for a variety of sports owes to Patterson’s work behind the scenes.

Patterson is reticent to label herself a trailblazer for women in athletic administration. She cites former Penncrest AD Michele Doyle and Upper Darby’s long-time administrator Holly Farnese as forerunners. Instead, she prefers to think of herself as “the old hen of the Central League,” a font of institutional memory for younger ADs to draw upon.

But women in positions like Patterson’s remain regrettably scarce in District 1. Of the 91 District 1 institutions, only 11 had female athletic directors in 2019-20, a paltry 12.1 percent. It’s even worse when you exclude all-girls schools in the Catholic Academies League: Of 80 co-ed institutions, just five have women as ADs. That’s an embarrassing 6.3 percent.

Patterson doesn’t focus on that aspect, though. She hopes that the willingness of the district (led by a female superintendent in Maureen Reusche) to put women in leadership positions has rubbed off on the kids.

“I think if anything, it is probably a great lesson for high school kids to see that there can be someone in charge like that, that there’s a female in charge,” she said. “It shouldn’t make any difference. It’s what a person’s content is rather than anything else.”

Patterson has never felt as though other Central League ADs have treated her differently, and many cite her as a valuable resource in navigating their duties. She’s extremely grateful for the uniqueness of Haverford, where she’s worked with coaches like Joe Gallagher in football and Paul Bogosian in baseball for more than 20 years.

Melding each coach’s needs with the collective of an athletic department is a puzzle that has long enticed her.

“You have to take every coach’s tunnelvision and bring it into the big picture for yourself,” she said. “That’s how you work it. Every coach has their vision of what their program is, but you have to see the big picture. I think that’s probably over the years what I’ve learned more of, that what’s best for one individual program might not be best for the entire program, and you have to challenge everything into what the overall program is.”

Even with the spring wiped out by COVID-19, Patterson isn’t focused on what she’s missing. She laments what could’ve been a bountiful season for softball, baseball, boys track and volleyball. Her only summer concern is on positioning the handoff of power, with an on-time start of the fall season and a regular opening of the school year still uncertain in the winds of the pandemic.

What she’ll miss most isn’t difficult to discern.

“The relationship with the staff and the students, without a doubt,” Patterson said. “When you have the ability to watch kids come in, go all the way through, make it through to college and then come back and coach, that’s the ultimate as an AD, to watch a kid go full circle. I’ve seen it with quite a few, and I think that’s probably the most rewarding thing you could possibly watch happen.”