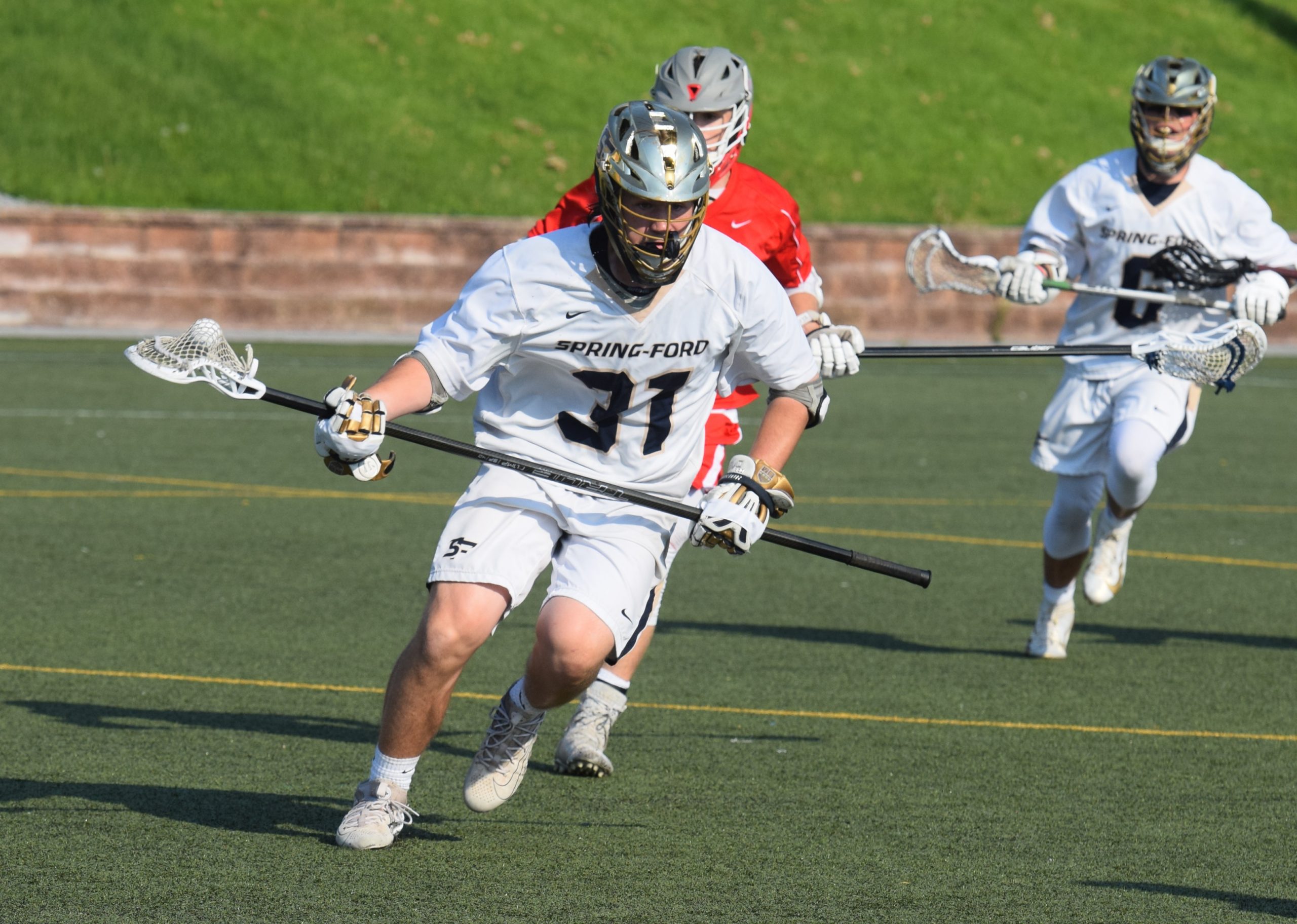 He was described by a Spring-Ford High teacher as “a stud in the classroom … a great student.”

That’s the reputation Blake Terrizzi, also a standout on the Rams’ football and lacrosse teams, forged for himself during his scholastic years.

A high standing in the Class of 2020, and a perfect score on the math portion of the Scholastic Aptitude Test (SAT), are just part of the academic standards he achieved.

A strong family connection didn’t hurt, either. Blake’s mother, Alicia, is a math teacher at Boyertown Middle School-West Center, and she was instrumental in establishing Terrizzi’s academic foundation.

“She’s very good in math and science,” he said. “She helped me with my homework when I was young.”

Terrizzi will be taking his academic acumen to a higher level following graduation from Spring-Ford. He has committed to Rensselaer Polytechnic Institute in Troy, N.Y., where he will study engineering — ultimately choosing between aerospace, chemical or nuclear applications — and look to continue his athletic pursuits from high school.

RPI won out over schools like Penn State and Carnegie-Mellon universities for Terrizzi’s services.

“I didn’t know about it until the football coaches came to Spring-Ford,” he said. “I fell in love with the place.”

Blake will definitely play for the Engineers’ NCAA Division III football program, which went 6-5 in 2019. He’s also giving thought to trying out for the RPI men’s lacrosse team in January, resuming participation in his other chosen sport.

“I want to see how my workload is with football,” he said. “I don’t know how my college workload will be like.”

Terrizzi feels his background in balancing athletics and academics at the high-school level gives him a basis for successfully doing so in college.

“It definitely helps,” he said. “Coach said he’s had guys who did both sports.”

Terrizzi turned a similar trick in boys lacrosse, becoming an All-PAC and Mercury All-Area first teamer on defense in 2019. He was a key component in the Rams winning the PAC title a ninth straight year, handling Perkiomen Valley 10-3 before topping the Vikings in the first round of the District 1-AAA playoffs 8-3.

“His best stats would be caused turnovers and groundballs,” SF head coach Kevin Donnelly said of Terrizi’s junior season. “He’s really good at both of them.”

Terrizzi and his Spring-Ford teammates came into the spring fueled to further pad their string of PAC titles. But after three weeks of practice, and within 1-1/2 weeks of their first game, the Rams joined the rest of the sports world in the COVID-19 pandemic shutdown.

“We were definitely disappointed,” he said. “We were hoping to capture another league title.”

He was also looking at his own role with the team expanding.

“In past years, I was a starter and main contributor,” Terrizzi noted. “This year, I was the only person other than goalkeeper with significant experience on defense.”

“Blake was going to be the leader of the team and defense,” Donnelly added. “He has always talked the defense through situations on the field, but I think he would have been a bigger voice in the locker room as well.

“I think he had the potential to be the player of the year in the league. He is very good, and it is a shame that he didn’t have the opportunity to play this season.”

Spring-Ford’s Blake Terrizzi (31) gains possession after a faceoff against Perkiomen Valley during their District 1-3A playoff game in 2019 at Spring-Ford. (Austin Hertzog – MediaNews Group)

At present, Terrizzi is spending his days outside online learning — his usual schedule for that is from 11 a.m. to 2 p.m. — with workouts to prepare for the upcoming football campaign at Rensselaer, He figures to play more at defensive tackle and end in college.

The program’s freshman camp is currently scheduled for Aug. 12-13, and he’s hoping to get the season in.

“I have had limited contact with coaches due to the coronavirus,” he said. “I’m waiting to hear from the RPI coaches.”

Terrizzi also spends some of his free time on hikes along the Perkiomen Trail and in the area of St. Peter’s Village. “It’s a chance to go outside for a couple hours,” he noted.

The activity served another purpose: Helping him recover from surgery to the lateral meniscus in his knee. He recalled making a bad cut during an early-season practice that caused the injury.

“The knee definitely feels 100 percent,” Terrizzi said. “I wanted to get back to being 100 percent for the season.”

Now, he has to settle for participating in Zoom meetings with his teammates to remain bonded with them.

“It’s good to see everybody’s face, if you can’t see them in person,” he said.

He’s also awaiting Spring-Ford’s virtual commencement, being conducted in lieu of the original ceremony scheduled for June 12. Like his fellow graduates, Blake is waiting for a specific date and time to get filmed receiving his diploma.

Then there’s the next phase of his life, continuing his education and athletic activities at Rensselaer. His lacrosse coach, for one, sees it being a productive pursuit.

“I think he will tear it up at RPI, literally and figuratively,” Donnelly said.