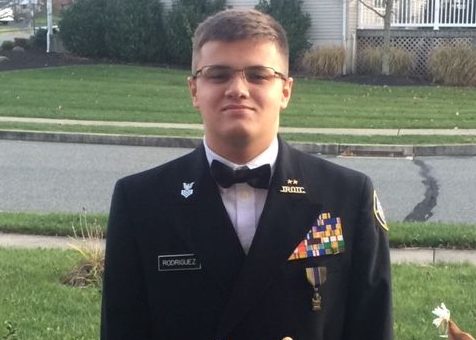 It was a memorable facet of his high-school experience.

Kyle Rodriguez’s participation in Boyertown High’s Navy Junior Reserve Officer Training Corps (NJROTC) program provided him one meaningful outlet for his energies. It may also factor in his post-graduation plans, which call for him continuing his education at Kutztown University.

Rodriguez will graduate from Boyertown with the rank of cadet petty officer first class (PO1), the equivalent of being a staff sergeant in the Army or Marine Corps non-commissioned officer (NCO) hierarchy. He served in the capacity of assistant squad leader, involved with the training of underclassmen in the unit, and participating in such activities as color guard.

“We had a good amount of seniors in the unit,” he said. “This was one of our best years in high school.”

It was shaping up as an eventful one for Rodriguez and his fellow cadets. There was a drill competition, one involving other JROTC units from the area and some based in New Jersey, at the end of March. There was also an awards banquet this month, along with possible participation in the Boyertown community’s annual Memorial Day parade.

But those plans were changed by the cancellation of the 2019-20 school year in mid-March. Remote schooling has taken the place of classroom and drill training, and the unit could be looking at its awards ceremony being a virtual one at a date to be established.

It was also shaping up to be a great season for Rodriguez and the Boyertown boys’ track and field team. He was a four-year competitor in the sport and worked principally in sprint events (100, 200) and on the 4×400 relay team.

“I worked hard to improve my times,” he said. “We had a couple practices at first, then we got back from a field trip and learned school was being cancelled for a couple weeks.

“I was bummed out. It was one more time to do my best.” The Boyertown boys were frontrunners for the Pioneer Athletic Conference championship this spring. Bears coach Jon Zellers praised Rodriguez’s commitment and disposition with the team his entire high school career.

“He was dedicated, always happy,” said Zellers. “In sprinting, he has gotten faster in his four years.”

The NJROTC accredited curriculum emphasizes citizenship and leadership development, as well as the nation’s maritime heritage, the significance of sea power and naval topics such as the fundamentals of naval operations, seamanship, navigation and meteorology.

Rodriguez estimated he could graduate with 20 medals — some of them are presented in areas like academic excellence — by the end of the year.

He is also fueled by memories of the unit’s successes over the past four years. One of them was at a drill competition the Owen J. Roberts NJROTC unit hosted during the 2018-19 school year.

“We’ve won a couple,” he said. “You get trophies for top-three finishes. We have a number of them in the trophy case at school.”

At Kutztown — a school several of his fellow JROTC students will be attending — Rodriguez will be studying sports management. He’s also pondering enrollment in the university’s Army ROTC program.

“It’s something I always wanted to be,” he said, noting his father is an Army veteran. “I enjoyed JROTC at Boyertown. I see no reason not to keep doing it.”