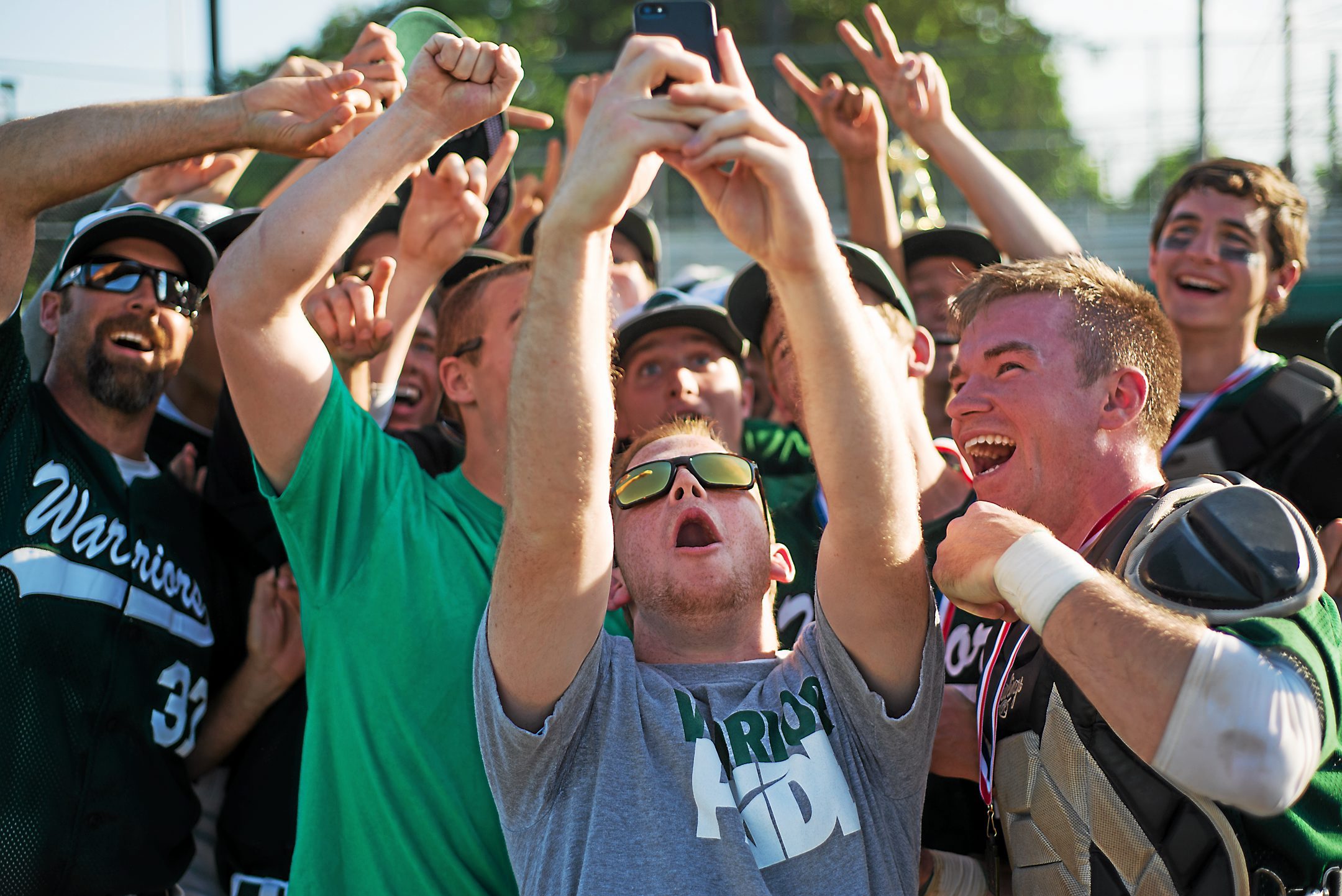 Methacton players and friends crowd together for a selfie after the Warriors baseball team earned their first District One title in 2014. (Rick Kauffman/MediaNews Group File)

Methacton baseball won its first and only Pioneer Athletic Conference and District 1 championships in 2014. One of the most important games of the season, however, was one the team lost.

In a 9-8 loss to Phoenixville on April 23, senior pitcher John Wiedmayer returned from an injury. Wiedmayer, a righty with electric stuff, struggled with control over his first three years with the Warriors. He took the loss against the Phantoms, but he proved to his coaches that he could throw without pain and that they could trust him in big moments.

Two of those moments were among the biggest in Methacton baseball history. He threw a complete game two-hitter with 10 strikeouts and one walk in a 1-0 win over Pope John Paul II for the PAC title and a complete game one-hitter in a 7-3 win over Boyertown for the District 1-4A crown.

“John was the wild card of the whole season,” Methacton head coach Paul Spiewak said. “He went through a period in the beginning of the season where he was struggling and then had some arm soreness. We weren’t sure what we were going to get from John and certainly the coaches knew that without him we looked to be fairly average and not the type of team that can make a long run.

“He was able to get through the (Phoenixville) game with no pain and tell us after that he was ready and good to go. We had a lot of conversations as a coaching staff like, ‘If our season is on the line in the postseason is this the guy we’re going to?’ Tim Carfrey actually threw the first game of the playoffs to get us into the PAC final. Then when Wiedmayer threw the two-hit shutout in the PAC final and only walked one guy – he was lights out. He earned the right to pitch in the district and state playoffs and he just never lost a game again until the state final eight when we made two big errors.”

The PAC and district championships are a big reason why the 2014 Warriors are the No. 14 seed in the Reporter/Times Herald/Montgomery Media Baseball Team of the Decade Tournament. After topping No. 3 Souderton 2019 in the first round, the Warriors are up against No. 6 La Salle 2014 in the quarterfinals. Voting on Twitter @ReporterSports will determine which team moves on.

Joining Wiedmayer in the pitching rotation were seniors Carfrey and Owen McCue. Carfrey was a second team All-PAC selection, finishing the season with 12 wins and a 1.972 ERA. Pitching was the catalyst to the Warriors going from the fourth seed in the PAC playoffs and the seventh seed in the district to the most decorated team in school history.

“(Wiedmayer and Carfrey) were unhittable for an entire month,” Spiewak said. “That is the whole story of everything that happened at the end of the regular season and through the league, district and state playoffs. Those two guys were legitimately unhittable and it didn’t matter who we were playing.

“Those three pitchers were dominant at the most important parts of the season. All three of them clicked at the same time and we just weren’t giving up any runs.”

Offensively, the team hit the ball well but really stood out for what they did on the basepaths. Through the district championship, the Warriors stole 104 bases in 28 games while only getting caught nine times. Senior centerfielder and leadoff hitter Kyle Feaster led the way with 21 steals in 22 attempts (he claims he was 22-for-22) while Carfrey added 18 steals and senior Austin Bregman 17.

“That was the reason for our success offensively,” Spiewak, who credited assistant coaches Bill Shirk, Jeff Musselman, Ben Yoder and Kerry Williams as key pieces, said, “the way these guys ran the bases with both aggressive play and also intelligent play – starting with Kyle Feaster. Everyone watching the game – both teams, both dugouts – knew he was going to steal second and third every time he was on, but he never let his aggressive play allow him to run us out of innings and that is rare. Everyone fed off of that.”

While Wiedmayer was dealing in the PAC title game, the offense took advantage of a pair of controversial calls to pull out the 1-0 win over Pope John Paul II, which went on to win the District 1-3A and PIAA-3A state titles and is the No. 7 seed in the Best of the Decade Tournament.

A pitch bounced by senior Kyle Lowery’s feet during a scoreless game in the fifth inning. Lowery immediately dropped his bat and ran to first base, claiming the pitch hit the bottom of his cleats. After lengthy conversations between coaches and umpires, the call stood. A few batters later, the bases were loaded with one out and freshman Pat O’Neil stepped to the plate. O’Neil, the No. 9 hitter and a defensive stud at shortstop, hit a grounder to second base. Lowery and the ball arrived at home plate at the same time.

“Impossible call and it could’ve gone either way,” Spiewak said. “Lucky for us, the call went our way – they called him safe. We ended up closing out the game and winning our first and only PAC championship, 1-0, on those two calls in one inning.”

Methacton opened districts with a win over Penncrest. In the second round, McCue came in after Wiedmayer took a line drive off his arm to help beat Garnet Valley. A quarterfinal win over Council Rock South set up a semifinal meeting with Conestoga and future first-round draft pick pitcher Brendon Little.

Methacton trailed Conestoga 3-1 in the top of the fifth inning with the bases loaded, one out and the heart of the lineup set to face Little. Lightning struck to cause a delay and, after a few hours, the game was postponed. Heavy rain in the ensuing days kept pushing the continuation of the game back.

When play did resume, Conestoga had a new pitcher and junior TJ Tornetta hit a two-out three-run triple – just out of the reach of a diving centerfielder – to put the Warriors ahead, 4-3.

After Conestoga tied the game at four, senior Greg Pellicano delivered for the Warriors. A two-out, two-strike single in the top of the seventh plated two runs to give Methacton a 6-4 win and send them to the championship game against Boyertown.

Wiedmayer threw a one-hitter – some would argue a no-hitter – in the district final, but the Warriors still needed some offense due to a poor defensive game. Lowery delivered the key hit to break the game open and Methacton went on to win, 7-3.

The Warriors beat George Washington in the first round of the PIAA-4A state playoffs, but lost Bregman to a shoulder injury and Tornetta to a broken finger. They lost, 3-2, against an equally short-handed Spring-Ford team in the state quarterfinals.

Tornetta joined Carfrey on the second team. He hit .440 in the regular season and .360 overall. Pellicano, who hit .310, was an honorable mention.

Voting for the second round of the Best of the Decade Tournament is open until Friday at noon.