SENIOR WEEKS: Captain Murray was looking forward to her chance at leading Villa Maria as a senior 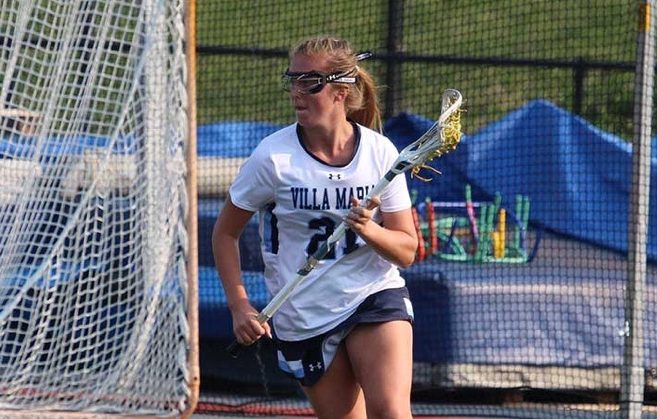 Villa Maria Academy senior Jacki Murray, who was a key midfielder for the Hurricanes’ District 1 Class 2A girls’ lacrosse champion squad last year, was looking forward to her role as tri-captain this spring.

“During these last three years I looked up to the seniors and wanted to be just like them, so when I was given this opportunity this year to be the [tri-captain], I was so excited and ready to fill in the shoes of the leaders before me,” said Murray.

Murray exercised her leadership role in the period from March 12 (the last day of on-site classes at Villa Maria) to April 9, when the PIAA cancelled the spring sports season.

“Being a captain of this team I tried to keep everyone positive during this time of uncertainty – we have been staying connected by daily zoom calls and group text,” said Murray.

“When April 9 came to be the official day that our season was cancelled I was devastated. I never would have thought my senior season would have been cut short and my last official high school lacrosse game was last June 8 in the PIAA state championship.”

During the past off-season, Murray prepared faithfully for the upcoming 2020 lacrosse season.

“I spent a lot of time in the gym working out and getting my endurance to be prepared for all the running I do in the midfield,” said Murray. “I also spent a lot of time shooting in my backward as well as going to Villa Maria’s turf field to just play around with some teammates.

“My hopes for this spring were high – I was hoping to achieve another state championship (Villa won the PIAA state title in 2018). Our Class of 2020 is a class that never takes no for an answer and always finds a way to get it done, and I was proven right we beat Academy of Notre Dame in our first scrimmage this year. I am happy to say that this was a great ending to say the least for my high school lacrosse career.”

Murray has plenty of great memories from last spring to take with her, too, as the Hurricanes captured their second consecutive PIAA District 1 2A championship, and advanced to the PIAA 2A state championship game against Springfield. Murray received Daily Local News’ All-Area honors as well as All-Main Line recognition.

“I loved being a part of the [back-to-back district titles] and being able to contribute to the team, last year especially,” said Murray. “I love the bonds that I have formed with all my teammates over the last three years and all the memories we have made.”

Murray got an early start in lacrosse, thanks to her older twin brothers, Ian and Ryan, who played the sport for Malvern Prep and graduated in 2016. Ryan went on to play lacrosse at the University of Pennsylvania, while Ian played football at The College of Holy Cross until the end of his sophomore year, at which point he decided he wanted to join the Navy, so he entered the ROTC program at Holy Cross.

“When I saw my brothers succeed in lacrosse, I knew I wanted to be like them, so I developed a great work ethic,” said Murray. “I loved going outside in my backyard just having a pass with them or shooting. We are all very competitive.

“I learned from my brother Ian that [success] doesn’t come naturally and you need to work hard to keep going, and never give up. Ryan on the other hand was a natural athlete, good at everything he did, so his advice to me was always to lead by example and be the best leader you can be. They both always told me to always to leave it all on the field.”

While Jacki played the attack position for her lacrosse club team, Philly blast, she has always been a midfielder for Villa Maria and prefers that position.

“I love midfield because I can be all over the field and have no restrictions,” said Murray.

A two-sport athlete at Villa Maria, Murray has played field hockey for Villa Maria for the past four years. She is also the Public Relations liaison on the school’s Athletic and Spirit Board and is involved with Villa Maria’s Children of Mary committee.

In the fall, Murray will attend Catholic University, where she will major in nursing and play for Catholic’s Division 3 lacrosse program.

“During my college search I was [at first] uncertain of what I wanted, and it was hard for me to narrow it down, but when I continued going to [lacrosse] camps each summer I realized I wanted a smaller school,” said Murray. “Catholic University has a great Division 3 lacrosse program. I decided I wanted to go D3 because I also wanted to be able to focus on my academics, and Catholic’s nursing program is very competitive.

“My older sister sparked my interest in nursing – she was studying to be a nurse and told me that she thought this profession would be for me. Nursing has everything I want, working with kids, helping others, and giving back to the people in need.”