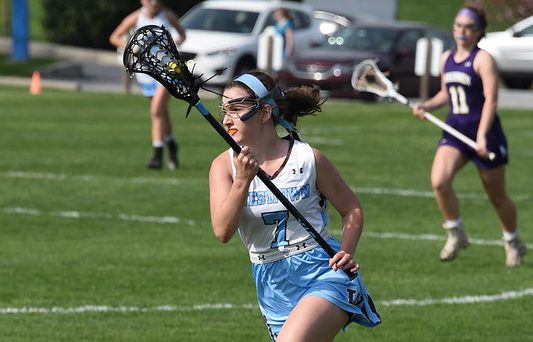 The idea of nursing the ill back to health has always appealed to Abbie Barth, and her aspirations intensified when she volunteered last summer at Chester County Hospital. And now, in the midst of a worldwide pandemic, Barth is more determined than ever to pursue a career in health care.

“I do enjoy helping people,” she said. “It just makes me feel warm inside.”

PHOTO SUBMITTED
Westtown’s Abbie Barth will head to Fairfield University in Connecticut, but will focus on a future in nursing instead of playing Division I sports for the Stags.

A native of East Bradford Township, Barth is a senior and two-sport star at Westtown School. She wrapped up four varsity seasons of field hockey last fall, but her final high school campaign in lacrosse was cancelled thanks to COVID-19.

Barth will attend Fairfield University in the fall and has been accepted into the Connecticut university’s Egan School of Nursing. And although she may play intramural sports, Barth is not going to compete at the NCAA level in order to better focus on her studies.

“My academic load will be rigorous enough, so I won’t be able to commit the time of playing at the Division I level,” she said.

Barth has a unique take on the similarities, and differences, of playing field hockey and lacrosse. She says that lacrosse requires more speed, but that communication is paramount in hockey, because there is less control of the ball.

“I think of lacrosse as field hockey in the air,” she said.

She enjoyed playing both, but Barth acknowledged that her experience in field hockey was more rewarding.

“I’ve been playing lacrosse longer, but throughout high school I had a better experienced playing field hockey because there were some complications with our lacrosse crew,” she said. “There was a barrier between the old coaching staff and the team in areas like communication, as well as some questionable strategy.

“The main advice was ‘you have to go out on the field and get the ball,’ but that was not very helpful.”

That coaching staff exited, and head coach Jennifer Raech and two assistants were hired on for 2020. And even though the squad went through several productive practice sessions, the season was ended before the games began.

“I am extremely bummed about it,” Barth said. “We were really looking forward to the lacrosse season. Our three new coaches really showed at every practice that they cared and they loved the sport. They showed us the importance of accountability.”

Barth started playing lacrosse in third grade, and once scored eight goals in a middle school contest. Her older sister, Maddie, was a 100-goal scorer for Westtown, and Abbie was a first team All-Friends League selection as a sophomore.

“I scored a lot of goals, but my lacrosse career in high school there was not a lot of improvement due to the coaching we had,” she said. “It was hard to get through, I have to say.”

Things were different in hockey. Barth scored 33 goals and had 20 assists in her last three seasons, and it all came together last fall. She led the team in scoring (17) and assists (12) and helped guide the Moose to a 12-2 overall record. Westtown upset arch-rival Academy of the New Church in the Friends League semifinals before falling to Moorestown Friends in the final.

“What Abbie brings as a student-athlete goes well beyond the field,” said Westtown head coach Amanda Oyler. “She is kind, determined, hard-working, and completely selfless. She goes above and beyond for her team, leads by example, and plays with so much pride and sportsmanship.”

Later named the team co-MVP, Barth was a first team all-league pick and was selected to compete in the 2019 PhilaFieldHockey Senior All-Star Game.

Even though Raech only had a couple weeks with Barth, she came away impressed, calling her a quiet, fierce competitor.

“Abbie is a passionate player, very demanding of herself and her teammates in a mature, positive manner,” Raech said. “Her strategic nature shows great vision beyond her years, as Abbie exudes confidence and composure in all areas of her life.”

To the surprise of no one, Barth now heads into the next challenge with the same type of determination and passion.

“I occasionally think about how much pressure is being put on nurses right now, but I am willing to go through a hard time like this to help people,” she said.

“Nowadays you see nurses all the time now in the media, on the front lines, and that makes me even more confident that this is what I want to pursue.”