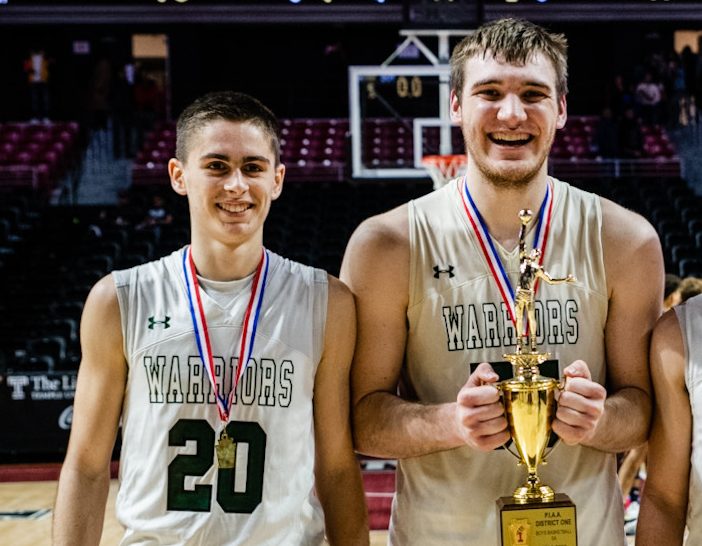 Jeff Woodward had big shoes to fill when he arrived at Methacton.

They weren’t someone else’s but rather the shoes the now 6-foot-10 Woodward planned to grow into during his four seasons with the Warriors.

Woodward evolved from a passive 6-foot-5 freshman who was nervous not to make a mistake for the upperclassmen into a dominant big man who consistently flushed two-handed jams and swatted away opponents’ shots during the last four years.

Chester’s Akeem Taylor, left, is shut down by Methacton’s Jeff Woodward in the second half of the District 1 Class 6A semifinal at the Liacouras Center Tuesday. Methacton handled the Clippers, 81-54. (Pete Bannan/MediaNews Group)

Woodward and Timko were the last two players distinguished as the Mercury All-Area Player of the Year with Woodward winning the award last season and Timko taking home the honor this year.

While Woodward was a four-year varsity starter for the Warriors, Timko didn’t join the varsity ranks until his junior year, turning himself into one of the area and state’s most prolific scorers during that time. He finished his career with 1,092 points and 160 made threes in two seasons.

“I felt like more of a leader, a lot more vocal than I have been in past years,” Timko said of the strides he took on the court. “I felt like that helped. I also felt some of the improvements I made in the offseason, getting faster, stronger and working on my game, that helped me get more confident and do more on the court.”

“Our play style really fit my game perfectly,” Timko added. “(My coaches) gave me a ton of confidence to be myself and be the player that I am.”

Timko and Woodward paired with seniors Owen Kropp and Brett Eberly (Elizabethtown College) to lead Methacton to a 52-10 record over the last two seasons.

The Warriors, who finished 28-2, captured their third straight Pioneer Athletic Conference title and the first District 1 championship in program history this year.

The senior quartet, along with sophomore Cole Hargrove and Brett Byrne and junior Ryan Baldwin, helped advance Methacton to the PIAA quarterfinals for the second straight year, where they were set to face Roman Catholic (one of the two teams to beat the Warriors) before the season was ended by the coronavirus pandemic.

“Those guys they helped push us and they helped shape us both into the players we are now right now,” Woodward said, “which then obviously helped us get these individual awards but more importantly, helped us do the things we were doing on the court as a team.”

Woodward and Timko started playing together in elementary school on the Audubon Recreation Association travel. They end their high school career together as two of the top players in the state.

“Since I’ve been playing with him for a while, it’s really cool to see both of us have success and grow as players over the years, and see all that hard work pay off,” Timko said.