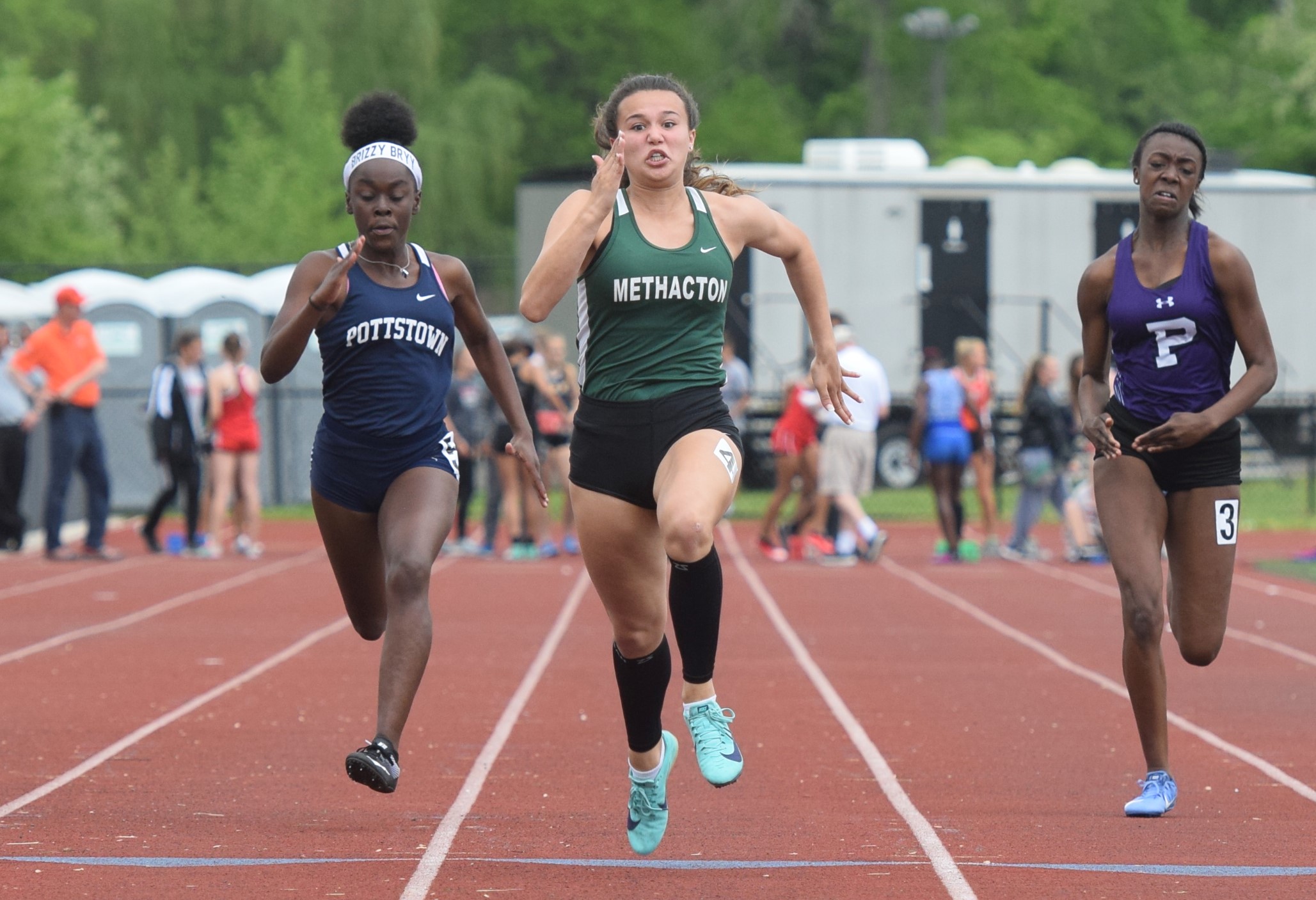 Her love for the arts can be credited to her mom while interest in athletics come primarily from dad.

Evans is a product of both, finding a way to mix those interests during her four years at Methacton High School.

“A lot of people were kind of surprised with me going from theater to a sport, but athletics and the arts kind of really mixed in my life because my mom was really into theater and my dad also did a lot of sports throughout high school,” Evans said. “I was kind of exposed to all of that.”

Evans was a member of the Warriors’ girls soccer team and girls track & field team, and she’s also been involved in Methacton’s musicals during her four years.

This winter, Evans played Jane Ashton, the fiancé of the lead male role, in the musical Brigadoon.

“I had a small part, but I had a really fun time doing it,” Evans said. “I have been doing shows at Methacton since my freshman year, and I’ve been doing it pretty much since third grade, so it’s a really big part of my life.” While Evans started playing soccer at a young age (she was a Mercury All-Area honorable mention this fall), track came later on in her athletic career.

Evans first tried the sport in eighth grade due to the coaxing of former soccer teammate Julianna Keenan, another one of the captains on the Warriors’ track & field team this spring.

Keenan said after two runners went to the high school team, she needed to find another sprinter for the middle school’s 4×100 Penn Relays team.

“I played soccer with Kate on a club team and I also played with her at Arcola,” Keenan said. “And Kate’s really quick, and just an awesome girl. She’s a really hard worker … I’m so glad she came out because she’s such a good energy on the team, and she’s just really talented. It all worked out.”

After a busy soccer season followed by the musical in the winter, Evans took a year off from track in the spring of her freshman year in 2017.

Methacton coach Rob Ronzano, who was taking a sabbatical during Evans’ freshman campaign, had seen Evans compete in eighth grade. He returned to coaching during Evans’ sophomore year and encouraged her to come out.

Ronzano’s words brought Evans back to the track as a sophomore, and she put together a successful career in the two seasons that followed.

“I would have missed out on a lot of fun,” Evans said. “I wouldn’t have gotten a PR, I wouldn’t have made it to states. He was awesome and helped me get to where I am, and I’m thankful that he did.”

Evans finished ninth in the 200-meter dash at the District 1 Championships as a sophomore, and helped Methacton’s 4×100 relay finish sixth at districts and qualify for states.

During that season, Evans also started to long jump after Ronzano saw her jump past most of his other athletes in practice. She finished ninth with a leap of 16 feet, 8.5 inches at the District 1 championships.

“She came out her sophomore year, was very much out of shape for the first month, month and a half, and came on really strong at the end of the year,” Ronzano said. “Last year she really blossomed as a junior.”

Evans, who started track as a way to stay in shape for soccer, became more invested in improving in the long jump as a junior last season. While she also ran the 100 at districts, Evans saw a marked improvement in the long jump, finishing sixth (17-07.75) and qualifying for states.

At the PIAA championships last spring, Evans set a personal record with a jump of 18-00.25 to finish 11th.

“Last year, when I went to states, I kept getting PRs,” Evans said. “I really saw improvements, and it became a little more important to me.” Methacton senior Kate Evans finished 11th in the long jump at the PIAA Championships as a junior in 2019. (Austin Hertzog – MediaNews Group)

Evans’ accomplishments on the track came despite coming into the spring season a few months of training behind many of her peers.

Rather than compete in the winter track season, Evans dedicated the majority of her time during that period to the musical, practicing for several hours every day after school and on weekends.

Evans made up for the lost time though in the spring. Come track season, she was 100 percent committed to improving on a daily basis, which led to her success in the postseason.

“When she comes out in March, she knows she’s not in great shape, but she works her tail off,” Ronzano said. “She doesn’t get down on herself. She understands that, ‘Hey we’re at the start of March, and I’m not in peak condition. But if I work harder each day at practice meets and so forth, we’ll see how it goes.’”

“Her mindset was such to say, ‘While I’m in the play, I’m going all in and doing it. Once the play is done, I’m going to go all out and do track,’” he added. “Once she put her mind into that, she was phenomenal.”

Evans was voted a captain by her teammates before the season. She was excited to chase even more improvement in her final year of track this spring before the coronavirus pandemic took away her senior season.

“I was definitely excited to be with my friends for the last time and compete together, definitely my 4×100,” Evans said. “I was hoping to maybe go to states again, see if I can get further in the long jump. I know that I reached my PR, and I would have liked to get a new PR and keep going. That’s something that I definitely missed and wish I could achieve.”

Evans is headed to Penn State next year and is undecided on what she is going to study, mentioning psychology as an option. While she would like to stay involved in sports and theater, she’s unsure how that might work as well.

Looking back on her high school career, Evans is proud of the time she has put in and the experiences she’s made enjoying her two passions.