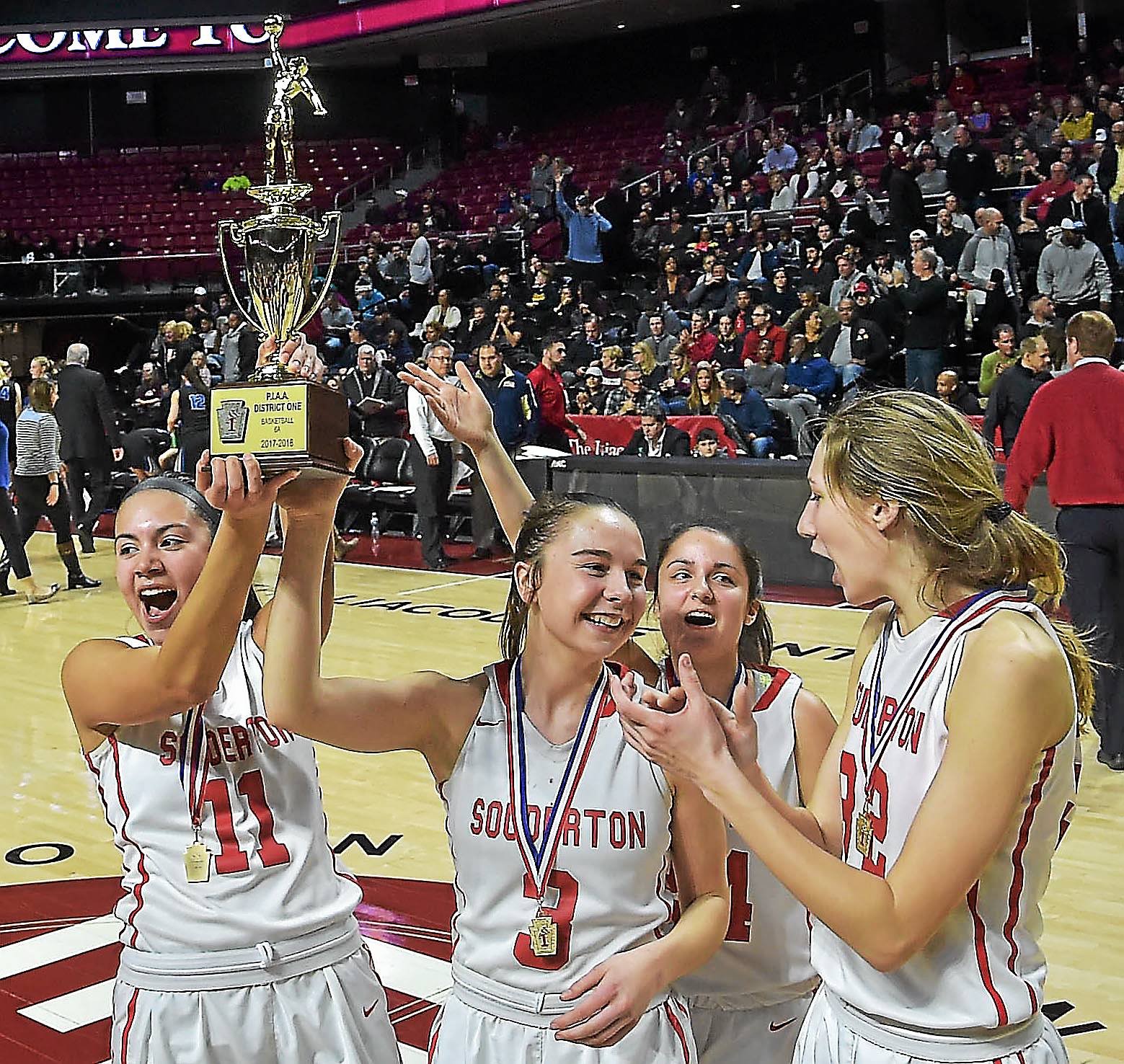 Pick any aspect of basketball and chances are quite high the 2017-18 Souderton girls’ basketball team excelled at them.

Whether it was offense or defense, the Indians played as one instead of five talented individuals and it reflected on the scoreboard, in the win column and to anyone who watched them. Steals, swats and rebounds on one end let loose into transition, extra passes, jumpers and celebrations on the other.

The way Souderton played paid off like a bounce pass to a teammate cutting toward the rim as the Indians collected SOL and District 1 titles and a state semifinal appearance.

Souderton, the No. 5 seed in the Reporter/Times Herald/Montgomery Media girls basketball team of the decade tournament, faces No. 1 Archbishop Wood (2015-16) in one of two semifinals with voting available on Twitter at @ReporterSports.

“Even though we were returning all our starters, I don’t think we expected be as good as we were,” point guard Tori Dowd said. “We knew we were going to be good but winning the district and playing such good competition, we never had an easy game and were always bringing it. We expected a lot but accomplished so much more.”

The Indians got a significant boost after the 2015-16 season when forward Kate Connolly transferred from Archbishop Wood back to her hometown school. Adding the 6-foot-2 forward to a group that included fellow juniors Alana Cardona, Dowd and Sami Falencki plus a host of underclassmen gave Souderton a heap of potential.

That first year together turned into a 24-8 record and a surprising run to the PIAA Class 6A semifinals after the Indians had to play their way into states as the 11th and final team out of District 1. A heartbreaking loss to North Allegheny set the stage for 2017-18 with everyone coming back after a full season getting back on the same page. Soudertons Kate Connolly goes in for a lay up during game against Easton during the PIAA playoffs at Spring-Ford High School March 13, 2018. (Gene Walsh/MediaNews Group)

“It was a good year to re-click, we grew up playing together but I hadn’t played with those girls for a few years,” Connolly said. “With that year, we got used to each other, we got to know each other better and it really made senior year so much smoother.”

Souderton started strong, winning its first five games of the season before falling 40-25 to CB South in its SOL Continental opener. The game would be the first of four eventual meetings between the two programs with each subsequent contest taking on more importance and to Connolly, served as a wake-up call.

The Indians would finish the 2017 portion of the schedule at 7-2, a good record but one that had them believing they could do better.

January 2018 started with a victory over North Penn that kicked off an eventual 22-game winning streak and included three titles. Souderton also got that defining win it needed on January 14 when it defeated PCL and PIAA power Neumann-Goretti in a showcase game at Jefferson University for its third win in a row.

“I remember when the schedule came out, I thought ‘we have to play Neumann-Goretti?’ We never really thought we had a chance,” Dowd said. “Getting down there, we played like we had nothing to lose and played our hearts out. We ended up beating them by a decent amount and it just set the stage for the rest of our season, it made us realize how capable we were of accomplishing so many things and beating good teams.” Five days later, the Indians evened the series with CB South by topping the Titans 41-30. South would drop another game in the Continental while the Indians would not, meaning Souderton claimed the conference title and the top seed in the District 1 6A tournament.

First, they had to deal with South again in the SOL tournament final and took a lead in the season series with a 48-29 win. While the first three games were double-digit wins for the winning side, none of them felt that far apart to either team.

“Every time you play a team, different things are going to happen and different people are going to step up and knowing what they were capable of, it added to our game and made us know what we had to bring to the court that night,” Cardona said.

“They were a really good team and every time we played them, you never knew who was going to win,” Connolly said. “Whenever we played them, it was always such a fun and exciting game that usually came down to the final minutes which made it even better. Those are the games you want to be in.”

Souderton’s style fit its players perfectly in the 2017-18 season. Connolly, Dowd, Cardona, juniors Megan Walbrandt and Megan Bealer rounded out a starting five that could rebound, run, defend, shoot and pass and used their mix of speed, height and length to maximum effect.

The Indians were efficient on both ends of the floor, averaging 46.7 points per game on offense while allowing 30.8 ppg defensively and just 985 total for the season. Dowd, who headed the defense with relentless ball pressure, knew there was a formidable next line behind her.

“We always believed the offensive end started on the defensive end,” Dowd said. “We all knew if anyone got beat, we had Kate and Alana in the lane. We gelled on both ends of the floor and you tell we were like a finished puzzle, we just fit together really well.”

Walbrandt and Bealer were excellent individual defenders while anyone who got near the rim risked having their shot sent back by Connolly or Cardona. In total fairness, that risk even extended past the 3-point line as Souderton was an equal-opportunity shot-blocking squad. “We had players with a lot of energy on defense, Tori specifically just always brought it on defense and you feed off each other, when you see that, the energy grows through the team,” Cardona said. “We were a long team with a lot of length to us and that helped us in all aspects. It adds momentum when you can get up and block a shot and we loved to run, so we’d get a block or a stop and push it on the other end.”

Dowd didn’t score much, but she was a deft facilitator on a team full of skilled passers. With a trio of solid 3-point shooters in Bealer, Connolly and Walbrandt, the Indians had plenty of space on the floor and usually passed up the good shot for a great shot.

Sami Falencki, the fourth senior co-captain, added more shooting off the bench while junior Megan O’Donnell made the most of her minutes spelling Dowd by adding another ball-pressuring guard and typically a key basket.

“We had such a good connection off the court,” Cardona said. “We were such great friends; we knew each other’s strentghs and weaknesses and could play in a way that used it to our advantage. It worked out really well for us because we all got along so well.”

Souderton and CB South’s final meeting of the season came in the District 1 title game at Temple, one that turned into a three-overtime classic full of clutch plays and gut-check shots from both teams. A critical three by Connolly and a strong third overtime from Cardona helped the Indians overcome a monumental effort from South’s Alexa Brodie for a 52-48 win.

It was the program’s first district title, an accomplishment in itself, but there was no denying the type of game it was added to the luster.

“That’s a game I’ll never forget,” Dowd said. “It was so back-and-forth, every time CB South made a big shot it was draining but we’d come back and have Kate or someone else hit a big shot that was so empowering again. Just knowing we had that little bit of energy in the tank to pull it out made holding up the trophy that much more special.”

“It’s one of the most exciting games I’ve been a part of,” Connolly said. “Both teams made so many plays to go to overtime, then the next overtime and the next overtime. It was a great atmosphere, they were a great team to play, they were so well-coached and just so tough to beat.”

The state run for the Indians would end where it ended the year before in the semifinals a few plays short of making the championship. While the seniors moved on after a 29-3 season, their standard had been set in place.

A year later, led by Megan O’Donnell, Bealer, Walbrandt and Curran O’Donnell, the Indians went back to the state tournament and again this season, with just one senior in Mikaela Reese, they did it again. The 2017-18 seniors see that as a legacy they’re proud to have left. “I look back on it with no doubts,” Cardona said. “I know we were successful and we did everything we could. It was a lot of fun, making those type of memories, having that type of season and knowing the community was there to back us up. It was amazing being part of something like that where people still talk about it and congratulate us on.”

“It’s probably the most fun I’ve had playing basketball in my career so far,” Dowd said. “Us being best friends, even though the season ended the same way two years in a row, we accomplished so many things. It’s crazy to look at how much we grew as a team.”

Connolly finds herself in a unique spot this round, as she was also a starter on the 2015-16 Wood team. The current Drexel sophomore joked she was torn what team to vote for but added her time at Wood was invaluable and something she tried to bring with her to Souderton.

“Everything we worked for, the way we clicked and how hard we worked to get to those moments is what I’m always going to remember,” Connolly said. “All the games, all the practices it took to get there, everyone had their moments where they played awesome and everyone was so happy for each other. We saw the whole team succeed and do well.”