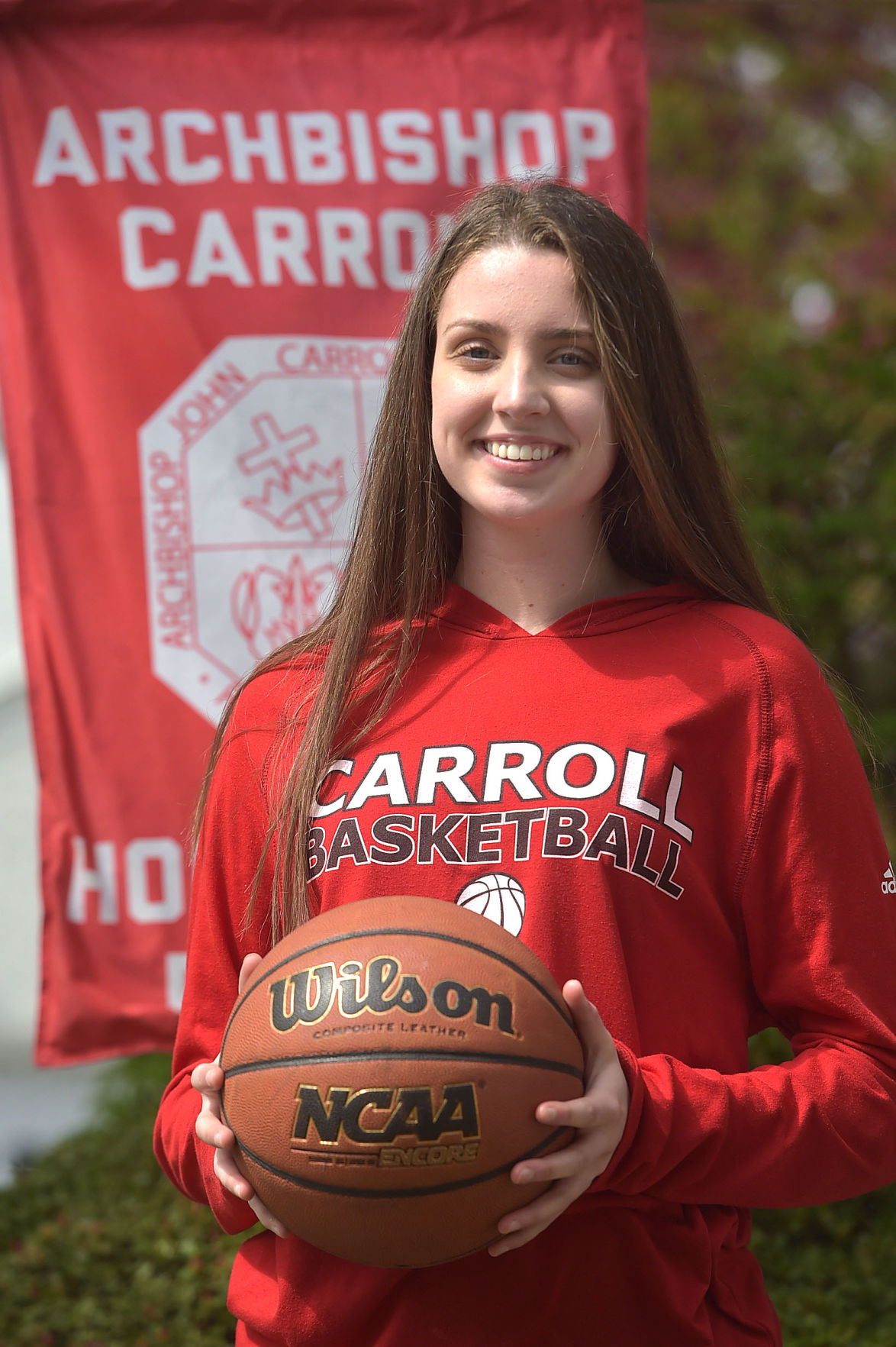 Archbishop Carroll's Erin Sweeney battled injuries this season but still had the Patriots on a deep run in the PIAA Class 5A tournament when the plug was pulled on the season. (Pete Bannan/MediaNews Group)

Erin Sweeney wanted to be a softball player.

“When I was younger, softball was the sport that I really liked,” the Archbishop Carroll senior said. “I played basketball, but softball was my favorite sport.”

In the sixth grade, everything changed for Sweeney. That’s when she decided to try out for the Comets, one of the best travel basketball organizations in the country, which has developed more than 600 college players since the mid-1980s.

“I made Comets, and after that first year, that’s when I decided basketball was what I wanted to play,” Sweeney said. “From that point on, basketball became my main thing and it’s because of the Comets. That’s when I pretty much decided, basketball is what I’m going to focus on.”

Archbishop Carroll’s Erin Sweeney battled injuries this season but still had the Patriots on a deep run in the PIAA Class 5A tournament when the plug was pulled on the season. (Pete Bannan/MediaNews Group)

The Havertown resident was a standout player at St. Bernadette’s before joining Carroll, where she was coached all four years by ones of her Comets coaches, Renie Shields.

A four-year starter, Sweeney led Carroll to the Catholic League championship in 2019. She eclipsed the 1,000-point mark as a junior and committed to Drexel University prior to her senior campaign.

While the Patriots endured a relatively uneven 2019-20 season by their standards, Sweeney was one of the most dynamic and feared basketball talents in the Catholic League and Delaware County.

Her body of work speaks for itself, and it’s why Sweeney is the 2019-20 Daily Times Player of the Year.

Sweeney is the squad’s only two-time All-Delco. She is the first Archbishop Carroll player to earn the Player of the Year award since Erin Shields in 2010.

Her senior season was halted in mid-March due to the coronavirus pandemic. Prior to the PIAA suspending, and eventually cancelling, all postseason tournaments, Sweeney had guided a young team to the quarterfinal round of the Class 5A playoffs. Next up was rematch with PCL rival Archbishop Wood, against which Carroll fell twice during the regular season.

Carroll had won three in a row since its elimination in the quarterfinals of the Catholic League tournament. A big reason for the team’s resurgence was Sweeney, who worked her way back from an ankle injury earlier in the season that cost her a handful of games. By March, though, Sweeney had returned to being the multi-faceted player that made her a Division I recruit as Carroll was poised to make it back to Hershey for the second year in a row.

“It still weighs on my mind a bit because I think we all wanted to have the chance to prove ourselves and get to the end,” Sweeney said. “I also think we all kind of accepted that the health of everyone is what’s most important, but at the same time, it’s hard because there never really was a real end to it all. Everything ended without us ever expecting it … so I guess that’s sad.

“We never got to be together again as a team one last time. But I think everyone understands why, obviously, and that it wouldn’t be a good idea to play sports and go to practices right now.”

Sweeney is like any other high school senior, wondering why this is happening and where they go from here. The senior experience was taken away from her, and she’s still coping with the new reality.

“They just announced (this week) that we weren’t going back, and there are a lot of things we don’t know yet,” she said. “I sort of wonder, you know, why this is happening to us and why it’s happening this year. I just wish I had the opportunity to finish out school with my friends and everyone at Carroll. Like basketball, you just wish you got a real end to it. I think about it a lot … I don’t even know, it’s all just insane and I just feel sorry for everyone at Carroll and all my friends.”

Sweeney finished her senior season as the sixth-highest scorer in Delco with 15.4 points per game. Her 44 made 3-pointers were seventh in the county.

“The kid has been a stud for us the last two years,” Shields said. “She dealt with injuries and a number of factors this year … but you can’t play a game without her. She’s been incredible.”

Sweeney looks forward to a new journey at Drexel. She was recruited by Denise Dillon, who recently became the new head coach at Villanova. Sweeney is excited to play under longtime Drexel assistant and first-year head coach Amy Mallon.

Sweeney joins a program coming off one of its greatest seasons. The Dragons captured the Colonial Athletic Association regular season title and were in position to make the NCAA Tournament before the COVID-19 outbreak forced the cancellation of all NCAA championships in March.

“I’m super happy to go there, and I know Coach Mallon is awesome. I’m really excited to be going there,” Sweeney said. “They obviously had such a great year this past season. Seeing what they were able to do, and knowing I get to be a part of that in the future is something that I’m really excited for.”

Sweeney never got closure on her high school career but she is making peace with the situation. Her favorite moment was winning the Catholic League title at the Palestra her junior year.

“Nothing was better than that,” she said. “I loved being at Carroll and playing for Coach Shields. There was no better place to play basketball in high school.”