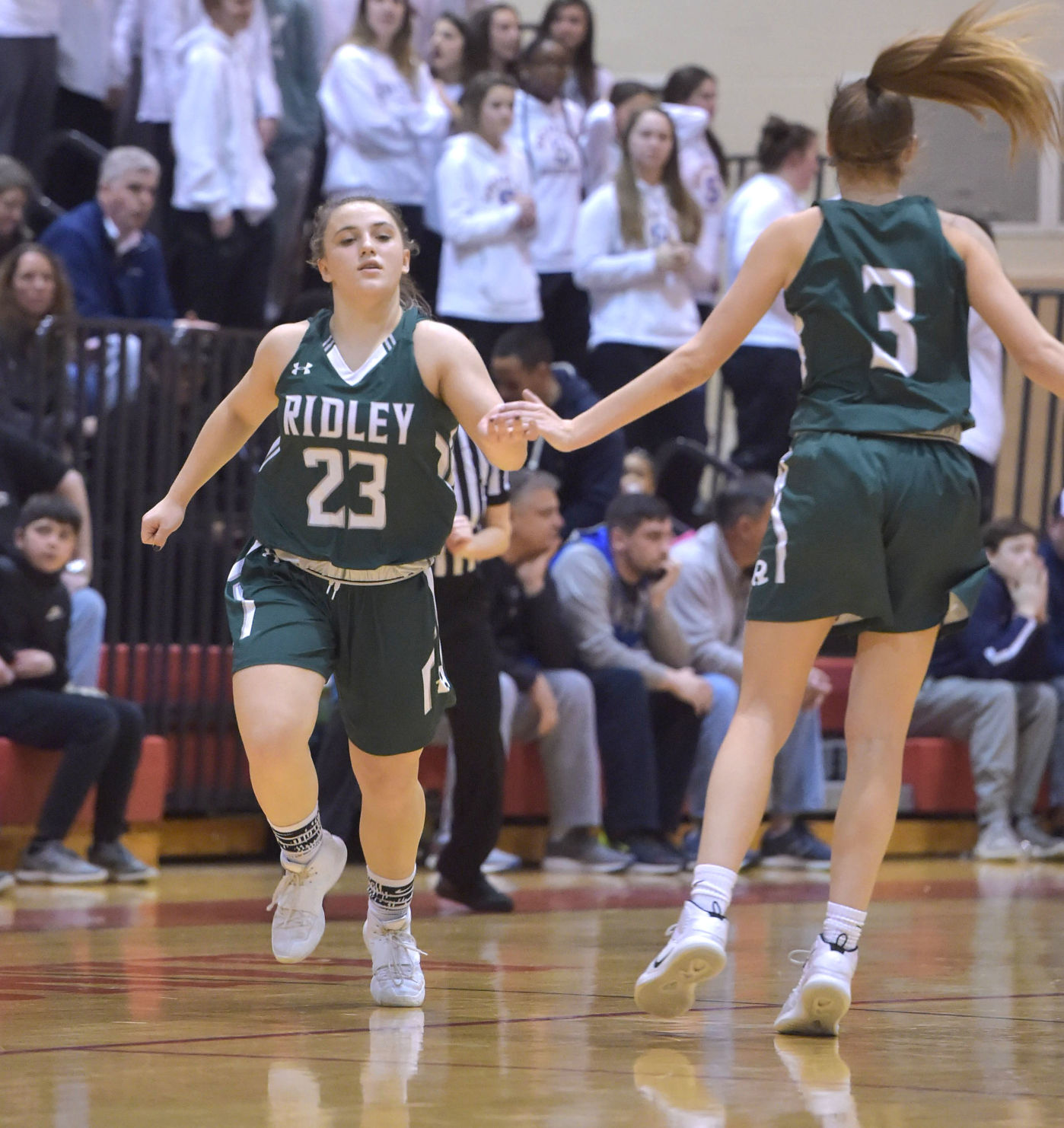 In her one season at Ridley, point guard Dakota McCaughan led Delco in made 3-pointers with 92 and propelled the Green Raiders to the Central League title. (Pete Bannan/MediaNews Group)

In addition to Player of the Year Erin Sweeney of Archbishop Carroll, the rest of the All-Delco first team includes:

Sophomore guard Sydni Scott helped a well-balanced and youthful Cardinal O’Hara team advance to the quarterfinal round of the PIAA Class 6A tournament. (Pete Bannan/MediaNews Group)

Grace O’Neill, Archbishop Carroll: A sophomore guard, O’Neill is a cerebral player and the best point guard in the county, someone who flourishes in every aspect of the game. O’Neill has been in coach Renie Shields’ starting lineup since the start of her freshman year. “Grace is so good and does so much for us,” Shields said. “She’s just a very good, very smart basketball player.” In what was an up-and-down season by Carroll’s lofty standards, O’Neill blossomed into one of the best all-around talents in the Philadelphia area. In Carroll’s two wins in the PIAA Class 5A tournament, O’Neill was excellent. In a 47-41 decision over Mount St. Joseph, she totaled a game-high 17 points and went 6-for-6 at the foul line in the fourth quarter. She tallied 15 points in the Patriots’ 55-34 rout of West Scranton in the second round. O’Neill, who earned All-Catholic League first-team honors, averaged 12.2 points and 2.6 assists per games for the Patriots.

Sydni Scott, Cardinal O’Hara: A sophomore guard, Scott was the engine that made a well-balanced Lions team go in 2019-20. A starter since the first game of her freshman season, Scott became one of the top players in the toughest conference in the state, earning first-team All-Catholic League honors. Even at times where she struggled with her shot, Scott found other ways to contribute and make her team better. Scott said following the Lions’ final win of the season in the second round of the PIAA Class 6A tournament that her goal is to “try my best to get everybody else the ball” when her shot is not falling. That’s precisely what she did in O’Hara’s season-ending victory over Spring-Ford, and she clinched the victory by making 11 of 12 free-throw attempts in the fourth quarter. Scott averaged 12 points, five rebounds and three assists per game for the Lions, who captured the District 12 Class 6A championship and placed third in the Catholic League standings during the regular season.

Maeve McErlane, Notre Dame: A sophomore guard, McErlane burst onto the high school scene in 2019-20 and led the Irish to a 19-win season. After showing flashes of her potential but playing alongside a pair All-Delcos in Mandy McGurk and Maggie Pina her freshman year, McErlane developed into one of the best talents in the Inter-Ac League. She had an amazing season, which resulted in first-team all-league honors. A silky smooth player who can dribble, drive and shoot the 3-ball, McErlane ranked among the top five scorers in Delco at 14 points per contest and led Notre Dame in most statistical categories. She averaged 5.3 rebounds, 2.6 and two assists per game while shooting 74 percent from the charity stripe. McErlane is a can’t-miss talent and one of the most exciting players to watch because she’s always doing something on the floor, even away from the ball, to help her team win. McErlane was among the candidates for Miss Pennsylvania Basketball, an award that recognizes the best high school basketball players in the state, according to SportsRecruiters.com.

Maeve McErlane developed into one of the best all-around players in the county, averaging 14 points per game to lead Academy of Notre Dame to a 19-win season. (Pete Bannan/MediaNews Group)

Dakota McCaughan, Ridley: A senior guard, McCaughan had a sensational season, her only one on Morton Ave. A three-year starter at Bonner-Prendergast, McCaughan transferred to her hometown school and changed the complexion of the program under first-year head coach Roe Falcone. With McCaughan’s highlight-reel playmaking and superb 3-point shooting, the Green Raiders captured the Central League title for the first time since 1994 en route to a 21-win campaign. In the Central League title game, McCaughan poured in 24 points to lead Ridley to a 52-40 decision over No. 1 seed Springfield. A first-team All-Central League honoree, McCaughan led all Delaware County players with 92 3-pointers and averaged 15 points, five assists and four steals per game. “Her stats speak for themselves and all the intangibles — confidence, grit, taking a charge with three seconds to go against Garnet and also shooting 9-for-14 from 3 that game,” Falcone said. “Her performance in the Central League championship was amazing. She (made) the players around her better, throughout the year.” McCaughan was also among the top candidates for Daily Times Player of the Year honors.

Alexa Abbonizio, Springfield: A junior guard, Abbonizio was one of the top offensive performers in Delco. The three-year varsity starter eclipsed the 1,000-point mark and is on pace to shatter Springfield’s career scoring record, which is held by her former teammate, Jordan D’Ambrosio. This season, Abbonizio embraced the go-to role after the Cougars bid farewell to a pair of four-year starters and 1,000-point scorers in D’Ambrosio and Belle Mastropietro. Abbonizio scored 20 or more points in 11 games and finished the season as Delco’s leading scorer at 16.6 points per game (481 points). Her 71 3-point field goals trailed only McCaughan in Delco. Abbonizio scored a season-high 29 points on three occasions. Perhaps her most memorable play of the season came in the final seconds of the third quarter in the District 1 Class 5A final. With the Cougars struggling to score, Abbonizio drilled a 3-pointer as time expired in the period, providing a spark for her team. With Abbonizio leading the way, the Cougars finished with a 23-6 record and advanced to the second round of the PIAA Class 5A tournament.