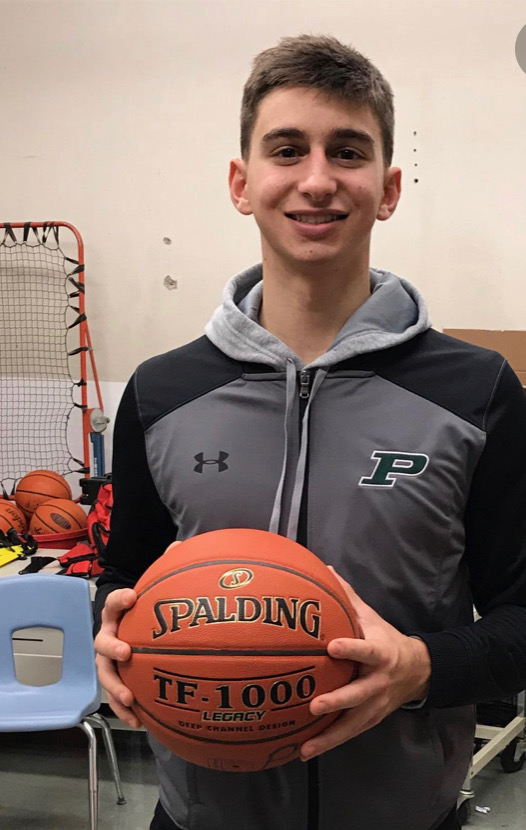 Christian Guldin liked the small campus and the hometown feel.

In fact, DeSales University is just 25 minutes from his home, and it offered everything he was looking for.

“There’s a lot of stuff around it and it wasn’t this huge type of campus — I’m not a big-population kind of guy,” Guldin said.

The Pennridge senior already felt part of the team.

“My brother (Michael) played there, graduated in 2015, so I watched a lot of their games,” Guldin said of the men’s basketball program at DeSales. “I got to know the coach real well.”

Guldin, a major force for the boys basketball team in his years at Pennridge, was one of 12 Rams to sign their college letters of intent on Tuesday.

Also, from the baseball diamond, Sean Clayton (Bucks County Community College) and Paul Croyle (Moravian) will play on the next level; and Shannon Griffin (field hockey) is headed to Albright.

It was a happy day for boys track and field, as Bobby Brashear (Massachusetts Institute of Technology), Marshall Fowler (Pennsylvania College of Technology) and Jack Wasserman (West Chester University) are all set for next year.

Tuesday was a day of looking forward, but also looking back.

“It’s really cool with all we accomplished,” Guldin said of the boys hoops team at Pennridge, a fixture in the postseason. “To go on the run we did (in 2019), making State Runner-Up, and then to win a state game this year and also win the Suburban One Challenge for the first time in history, it means a lot.

“It’s gonna be really cool to go back to Pennridge next year when they put the banner up. We were able to make our mark.”

Guldin was a big part of that success.

Said coach Dean Behrens: “Christian was an absolute floor general this year. He handled all the different presses and traps that were thrown at us.

“He hit many big shots this year and his defense was outstanding. He’s a hard-working and dedicated player. He bleeds Pennridge green.” Trent Fisher was one of 12 Pennridge athletes to sign his college letter of intent on April 14, 2020.

And Fisher kept on raising his level of play.

“One of the most improved players I ever coached,” Behrens said. “From a sophomore who didn’t even start as a J.V. player to a First-Team All-League player.

“With Trent as a starter, we were 48-15: two state runs, one State Runner-Up finish, two conference titles and one SOL Challenge Championship.”

Fisher is guaranteed to see a familiar face next year – Wilkes plays DeSales twice a season and may be battling each other for the MAC Tournament Championship.

“They went through a rebuilding year this past year but they have a long history of success,” Fisher said of Wilkes.

Kirk has an aunt that went to Bloomsburg, and also felt a connection with the campus, coaches and team when she visited over the summer.

“I really grew as an individual and performer,” she said of her years at Pennridge. “When I first started as a sophomore, I wasn’t as serious as I am now.

“The coaches told me I could be better if I really tried. The thing I really like about the sport is finishing a race and being able to feel like you worked really hard and accomplished something.”