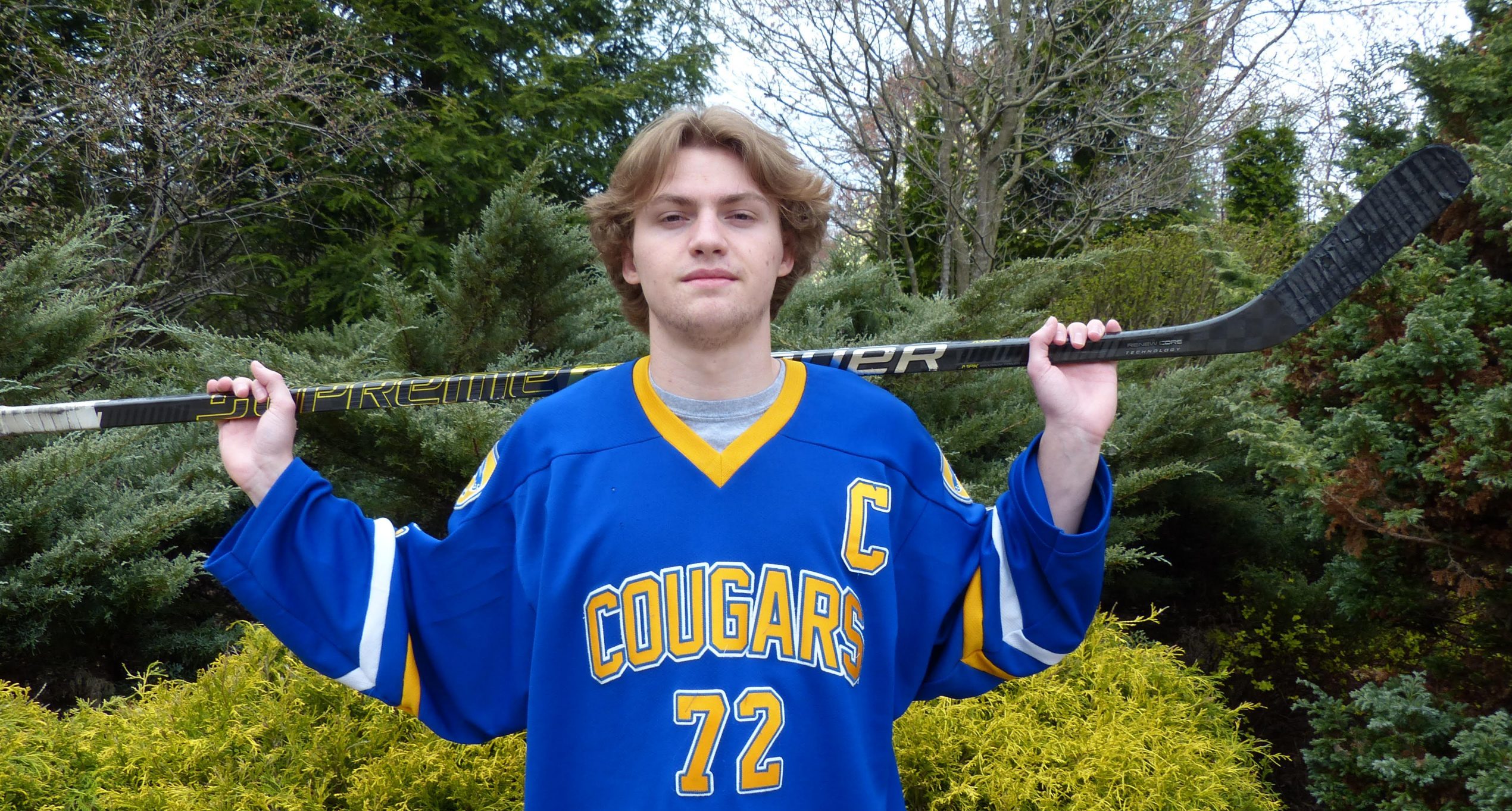 At age 5, Ryan Prestayko’s introduction to ice hockey began with skating lessons. Both his father and grandfather played the sport and wanted the youngster to get in early with the basics.

In no time at all, young Ryan was able to skate circles around the opposition. But a decade later, Prestayko’s game really took off when he was able to refine the rest of his game to meet the level of his skating.

“Thanks to those early lessons, every year my skating was ahead of my stick-skills,” he explained. “Eventually, by the time I was a junior in high school, I started matching my skating with better stick-handling and shooting.”

Downingtown East’s Ryan Prestayko scores his fourth goal of the game Sunday against Downingtown West in the 2019 Flyers Cup final at the Wells Fargo Center. (MICHAEL REEVES – FOR MNG)

It all culminated this winter with a monster senior season at Downingtown East. Despite drawing extra attention from every opposing defense, Prestayko amassed 35 points in 18 games (17 goals, 18 assists) to turn a lot of heads and grab the Daily Local News All-Area Player of the Year award.

“I loved the way he played the game,” said West Chester East head coach Eric Wolf. “He busted it every time out.

“Ryan’s got a big ticker. If he needs to be physical, he can do that. He’s just one of those guys where if you don’t know where he is on the ice, you will figure it out soon as he’s skating by his bench with his arms raised.”

With early guidance from his dad, Dan, and grandfather, Archie — who played Division I hockey at Colorado College — Ryan made the Cougars varsity roster as a freshman. But at 5-foot-4, 115 pounds, he played sparingly.

“Every game I was so nervous to get out there against guys twice my size,” he recalled. “I knew I had the skill but not the confidence.

“I didn’t play that much. In the state championship game in Pittsburgh I got one shift early in the game, made a bad play and sat the rest of the game. I kind of beat myself up for that, but it’s experiences like that that helped me learn and become a better player.”

Prestayko began to develop his reputation as a clutch player, able to find another gear in the biggest moments, as a sophomore. In the class 2A state championship game against Armstrong in 2018, he ended the longest Pennsylvania Cup game in history with the winning goal a few minutes into a fifth overtime. It was the Cougars second straight state crown.

“I did not get to play much in the first three periods and first two overtimes,” Prestayko said. “But by the fifth OT, everybody was getting so tired and I was on the bench ready to go. I got my chance, I was in the right spot at the right time and tipped a shot and it went in.”

His stature as a big-game performer was again on display when Prestayko exploded for four goals at the tail end of his junior season, powering Downingtown East to its third straight Flyers Cup triumph.

“The puck just started going in,” Prestayko pointed out. “I had a crazy spin-around back-hand that luckily went in. That game was wild – probably the best experience of my high school career.”

Up to 5-10, 165 pounds, Prestayko entered the 2019-20 season as a marked man. But the Cougars suffered heavy losses due to graduation and defections, and the talent around him had dropped off.

“We had great teams since I was a freshman,” he said. “But about four teammates in my grade decided not to play this season. We lost a lot of talent so I just knew I needed to step up.”

A broken wrist to starting goaltender Haig Pogharian, however, brought on a mid-season lull and the three-time defending Flyers Cup champs were in danger of missing the postseason. But with Prestayko leading the way, the Cougars rallied with late wins over Boyertown, Unionville and eventual Ches-Mont champion West Chester East to slip in as the 14th seed.

“It’s hard to explain, but in the big moments I just felt something — and it helped me have a knack for playing better and scoring goals in big moments,” Prestayko said.

The Cougars were knocked out of the playoffs by third-seeded Perkiomen Valley, but playing in the final game of his high school career, Prestayko scored three times and added two assists, and almost single-handedly kept East in front until the third period.

“Ryan is a skilled hockey player, an incredible leader and most importantly a great person,” said his coach, Dave Hendricks.

“This season (Prestayko) was so clutch,” added Wolf. “I watched him against Perkiomen Valley, who was a Flyers Cup Finalist, and he was tremendous. This was the first year you had to game plan against his line. When you looked down (Downingtown East’s) roster, he was the guy you had to be careful of.”

The Downingtown resident is headed to Penn State where he is planning to major in business. After getting acclimated academically, Prestayko is thinking seriously about playing club hockey at PSU.