Delco Madness: Current coach convinced best O’Hara girls team was a thing of the past 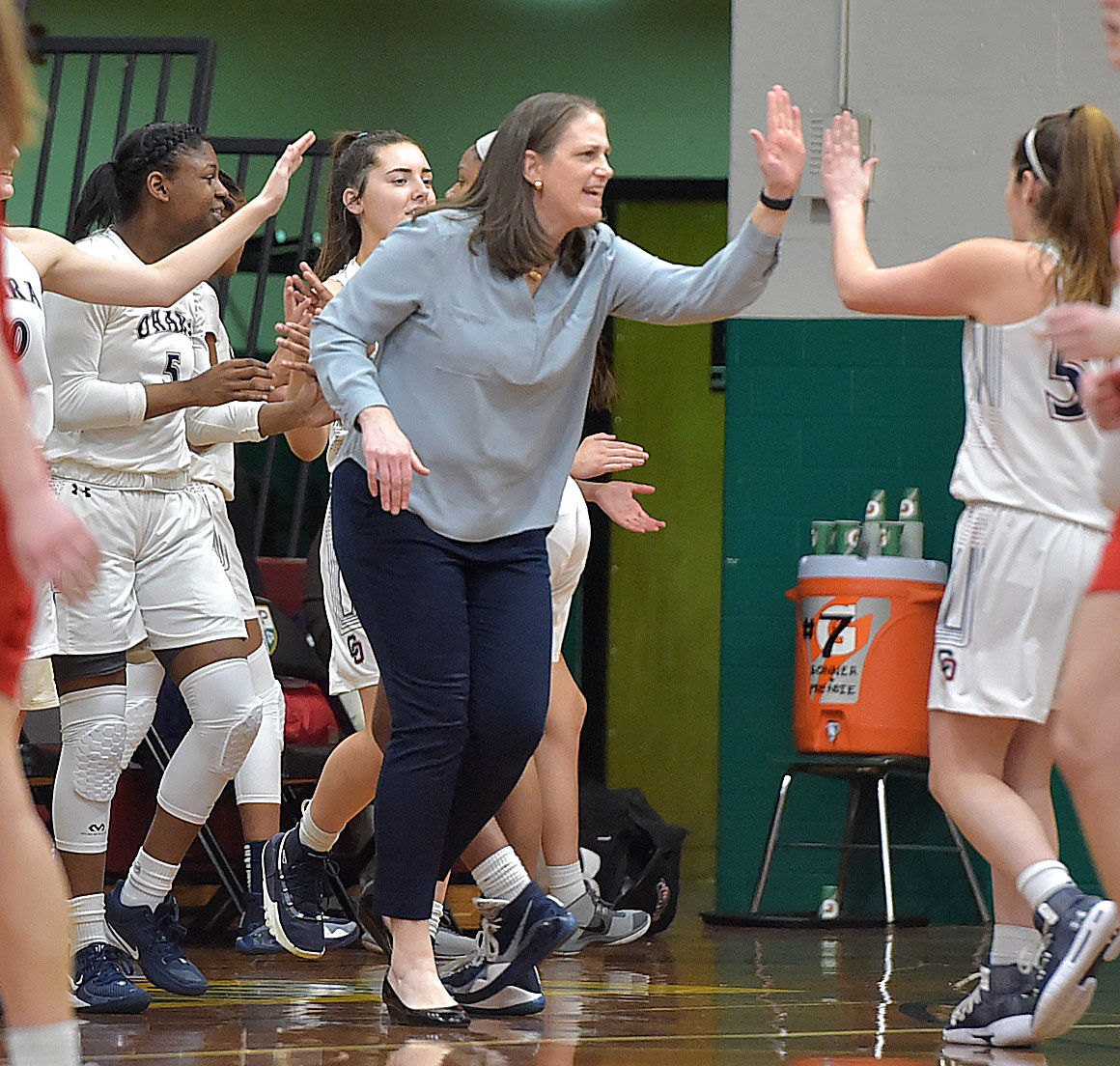 Cardinal O'Hara coach Chrissie Doogan, here trading high-fives with players during a playoff game against Souderton last month, had to admit the O'Hara team she led as a player seems a tad better than those she's coached. (Pete Bannan/MediaNews Group)

In the 27 years since Cardinal O’Hara enjoyed a perfect season, girls basketball has evolved.

There have been more summer camps and better coaching, improved nutrition and additional opportunities, more accurate outside shooting, an expanded PIAA and more competition for college scholarships.

Chrissie Doogan has seen it all, from that beginning when as Chrissie Donahue she was the Daily Times Player of the Year for the Lions in 1993 and into the second decade of the 21st century as the Lions’ head coach. She appreciates the growth of her sport, its opportunities, its rule changes, its challenges.

Yet she is not budging.

“Our team would have beaten today’s girls,” she said, laughing a little, yet quite serious. “My team now is not going to want to read that.”

The 1993 Lions beat every team they played, going 28-0 and dropping Bishop McDevitt to win the Catholic League championship. In the proud history of O’Hara girls basketball, which effectively began with legendary Theresa Shank (Grentz), included the dynamic career of All-American Kristen Clement, and in recent years produced WNBA champion Natasha Cloud, there was never a more complete and dominating team than in 1993.

For that, those Lions, now in many cases with daughters beginning to thrive in basketball, have followed the Daily Times Delco Madness, a mythical tournament to determine the greatest high school girls team in Delaware County history.

“I’m excited that we’re the last O’Hara team standing,” Doogan said as the tournament rolled into a long Final Four weekend. “So that makes me happy. But you’ll never know. Our team was uber-competitive. We used to say our practices were harder than our games. So when my name was in the paper for scoring 37 points (in a mock opening-round win over 1992 Notre Dame), I got a text from Marnie McBreen. And then the next day, when her name was in the paper, I told her, ‘Marn, you had a big game last night.’ So we are playing around and having a little fun with it.”

It’s about fun, but it’s about perspective too. And as O’Hara reached the championship round Friday night with a mock 68-62 victory over Prendergast (1985), it was a reflection of the right team being together at the right time.

By 1993, the girls game had grown from a primitive start into what has been its current form. The three-point line was newer, but not as much a factor as it has become. The coaching had turned sophisticated. And with a rigid feeder-school system still in place, O’Hara was peaking as a sports power in the pre-open-enrollment Catholic League era.

All of that conspired to surround the dominant Donahue with a depth of talent rarely seen in later years, when enrollments decreased and so did the patience of many good players not willing to wait in roster traffic for a turn to be stars.

“It was just a team with no egos,” Doogan said. “We loved playing with each other. A lot of us got a lot of minutes as underclassmen. But we knew that senior year was it. We wanted to go out strong.

“We didn’t get a chance to play in the state tournament. So for us, it was the Catholic League and the chance to go undefeated. And that’s what we went after.”

If the Lions were in the state tournament, they almost surely would have won, beating some other Catholic League team in the finals, and probably one in the semifinals, too. That’s how strong the league was at the time, and how it has played out in the Daily Times Sweet 16, with O’Hara reaching the All-Catholic-League final against top-seeded Archbishop Carroll (1979), guided by Hall of Fame coach Muffet McGraw. That will be at 2:30 Sunday afternoon at the Wells Fargo Center. No tickets are available.

O’Hara will be ready.

“We just had a whatever-it-takes, we’re-not-going-to-lose attitude,” Doogan said. “Nobody cared who got the press in the paper or the headlines or anything. We just wanted to win all the time.”

In the girls Final Four Friday:

All-Delco Claire Rose led the late charge, saving 10 of her 15 points for the last 2:30, including 8-for-8 perfection from the line when the Clippers were forced to foul.

The boys Final Four doubleheader will be Saturday night at the Wells Fargo Center.