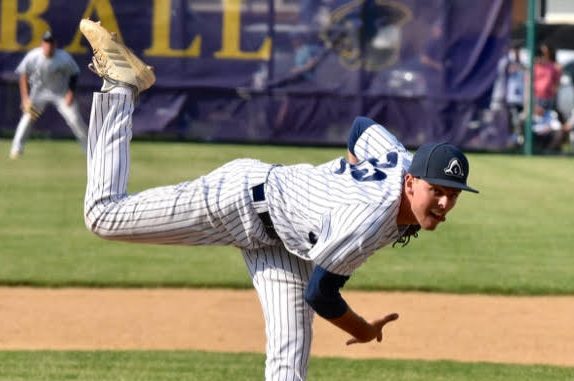 As Corcoran’s senior baseball campaign approached this spring, he still had some unfinished business, however.

“Team championships are why we play the game, and last year we didn’t win the Inter-Ac title, which was disappointing,” said Corcoran. “I would trade my individual honors for an Inter-Ac championship in a heartbeat. So with that said, this spring I was only worried about doing whatever I could to help my team win the league. During the off season, I worked on getting my body in shape to endure a workload similar to last season.”

Corcoran made his presence felt on the mound last year. During his 56 innings last spring, Corcoran struck out 59 batters, allowing only 15 walks. So, naturally, he was disappointed with the delay (and possible cancellation) of the spring sports season because of the coronavirus situation.

“It’s really unfortunate – as a team we put in a lot of work in preparation for this season, and it’s a shame we can’t get out on the field to show this,” said Corcoran. “So many kids from this area and all around the country are going through these same emotions. But at the end of the day, some things are more important than baseball. And it’s a good time to work on myself and spend time with family.”

Speaking of family, Corcoran’s father, Bill, introduced Tristan to baseball a youngster when the youth joined the Little League baseball program in Ridley.

“My Dad takes a laid-back approach,” said Corcoran. “He just allows me to figure things out on my own which I appreciate. Whether I have a good game or bad game, he allows me to keep my head level and focus on the next game.”

“They had a great impact on me, as a player and more importantly, as a person,” said Corcoran. [Demucci] was a tough coach, and installed grit and toughness into my teammates and me. He taught us what hard work meant, and that has greatly helped me through my high school career. He is considered family to me.”

When Corcoran was in eighth grade, he made the decision to attend Malvern Prep as a freshman, and that when he first met Friar coach E.J. Moyer.

“[Moyer] told me I would pitch for him, which was confusing considering I only played second base,” said Corcoran. “As a freshman, I worked with Coach Moyer and he helped me transition into becoming a pitcher.”

Corcoran saw varsity pitching action as a freshman against Pope John XXIII, and the following year, Malvern earned the second of its three consecutive PAISAA state tournament titles, behind the pitching of Tristan’s older brother Billy, the Inter-Ac’s Most Valuable Player that season.

“Billy continues to be the ‘ghost’ that I’m constantly trying to catch,” said Tristan. “The biggest thing that Billy has taught me is to take mental repetitions during practice and to treat practices like the game. Also, by just watching him pitch over the years, he has taught me how to keep my composure on the mound, and to control what I’m able to control.”

Last spring, Tristan played a key role in the Friars’ road to the PAISAA state title. The third-seeded Friars edged Germantown Academy, 1-0; defeated No. 2 seed Haverford School, 5-1, in the semifinal; then came from behind to defeat Perkiomen School, 5-4, in the championship final.

“The state tournament run last spring was special,” said Corcoran. “The 1-0 win against Germantown Academy showed that we had guts. We got the monkey off our back by beating Haverford, after losing two 2-1 games to them during the season. And the championship game was unbelievable – Chris Newell hitting the game-tying home run, and Cam Conley with the walk off. There was no better way to send the seniors off.”

Malvern Prep baseball head coach Freddy Hilliard said, “Tristan is one heck of a pitcher because of two things – one, his tireless work ethic and two, his persistence in getting better every day. He is one of the most humble, selfless, and hardest working players I’ve ever coached.”

Off the baseball field, Corcoran has participated on many service trips for Malvern Prep.

“The most impactful trip was to the Dominican Republic with my fellow Malvern Prep brothers,” said Corcoran. “As a group we were able to bring clean drinking water to a village by building an aqueduct. We also cemented floors for a couple families, who previously had a dirt floor. This experience made me thankful for everything I’ve been blessed with.”

In the fall, Corcoran will attend Elon University, where he will major in Finance and play baseball.

Hilliard said, “Tristan’s meant a lot to us not just for his performances on the mound but also his leadership and character. Tristan has always embodied our ideals and core values, both on and off the field. Both his teammates, the younger players, and even our opponents, have noticed the example and standard he has helped set. We will miss him tremendously.”