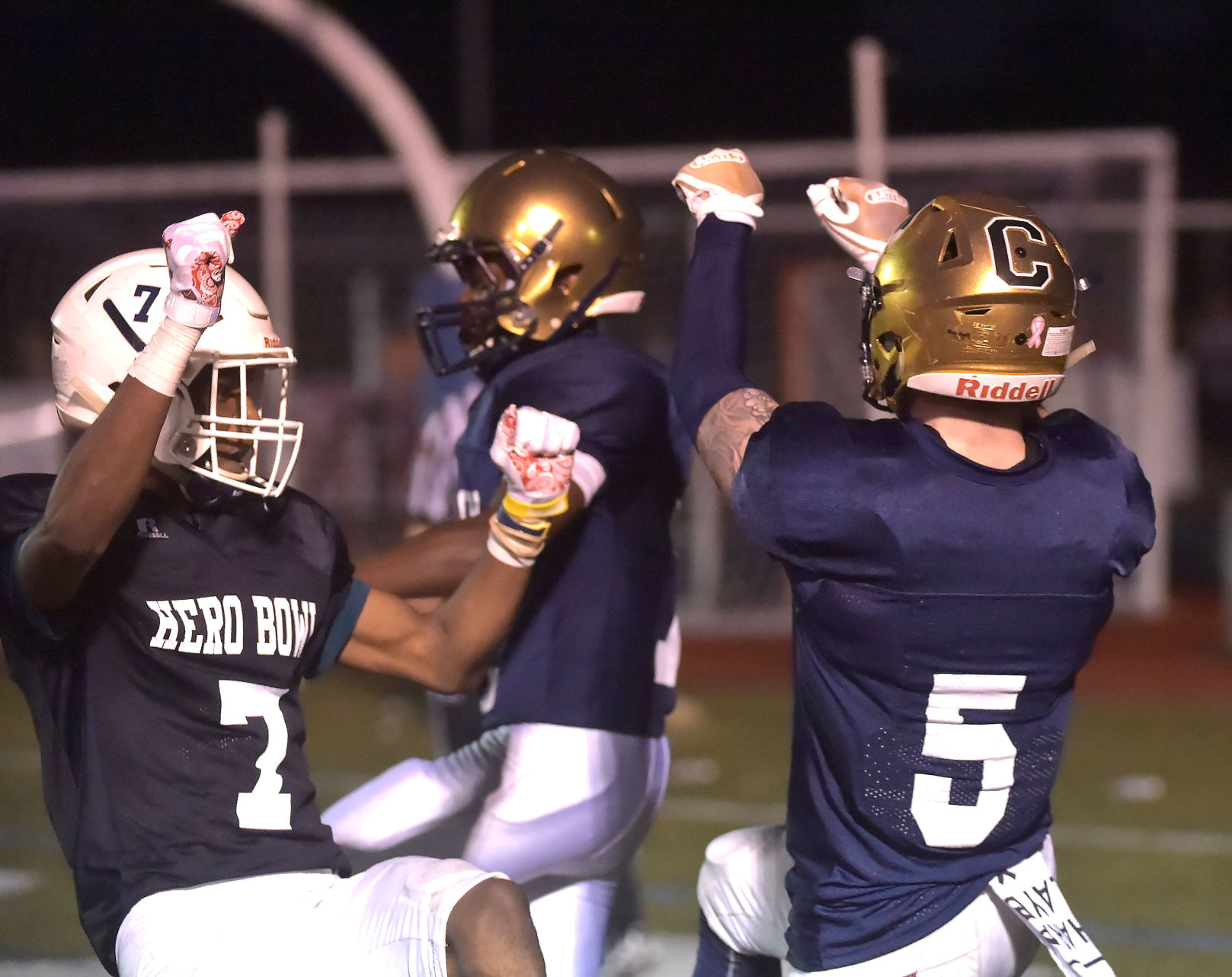 Penn Wood's Kennedy Poles, left, and Sun Valley's Julz Kelly, right, celebrate after they connected on a touchdown pass, Kennedy's second, as the East beat the West, 22-12, in the 43rd annual Hero Bowl last year. The 44th game was cancelled in the wake of the coronavirus pandemic. (Pete Bannan/MediaNews Group)

The coronavirus pandemic has forced the cancellation of the 44th annual Delaware County Hero Bowl.

Delco’s all-star charity football game had been scheduled for Thursday, May 28 at Cardinal O’Hara High School.

“For the safety and the well-being of the players, cheerleaders, coaches and the public, the Board of Directors of the Delaware County Hero Scholarship Fund and the Hero Bowl Committee have announced that the 44th Annual Delaware County Hero Bowl has been cancelled due to the Coronavirus/Covid-19,” board president Robert Lythgoe said in a press release Monday.

The Hero Bowl is the main source of funding for the Hero Scholarship Fund of Delaware County, Inc., which provides scholarship support to the children of police officers, firefighters and emergency medical personnel who have sacrificed their lives in the line of duty.

“People may think that because the Hero Bowl is not until May 28, we may have some time. While that’s true, we start May 11,” Lythgoe said in a phone converation with the Daily Times. “May 11 is the date when all the players get their physicals and all the players and cheerleaders get their pictures taken. It’s basically right around the corner.

“We obviously didn’t want to put anybody in jeopardy, knowing what we know about the virus, so we had to make a tough decision. There are so many other things to consider. The jerseys had to be made and printed up. You can’t go to the sporting goods store and ask them to make up a 100 jerseys at the last minute.

“We’ve been pondering this, going back and forth the last two weeks. We finally decided this morning that this has to stop and we can’t go forward.”

Lythgoe said not much consideration was given to postponing the game until sometime in June. Moving the game back a few weeks would have caused scheduling conflicts with graduations and senior weeks. Ultimately, the game had to take place on May 28 or not at all.

“These are seniors in high school, you know, and once they’re out of school and graduated, they’re down the shore or on vacation somewhere or they have summer jobs and things like that,” Lythgoe said. “The Hero Bowl has been on Thursday night for the last few years because you have proms on Friday night. If you did it on a Saturday night, then you have to deal with kids and families who have houses down the shore and they have other things they want to do. We moved it to a Thursday night in order to make everyone happy.

“It wasn’t an easy decision but we felt – and when I say we, I mean the entire board of directors – that this was the right thing to do, for everybody’s safety.”

BJ Hogan, who is the athletic director and head football coach at Cardinal O’Hara, broke the news to his four senior players and Hero Bowl participants Wednesday.

“I’ve gone to all the meetings and have been in contact with (members of the board) and I understand their decision to cancel,” Hogan said. “The decision was made understanding what’s all going on right now. At this time, there’s no other decision that could be made. The Hero Bowl, since it has started, has always been rain or shine on that day. If this stuff wasn’t going on, and there was a lightning storm or something like that, the game is either played on that night or never. It can’t be pushed back because of graduation and all the other things.

“The thing that stinks is, all the money that would’ve been raised through the game. That money would’ve gone into the Hero fund and what they’re all about. I don’t know what can be done, but hopefully once this all gets cleared up that we can be able to make up that revenue somehow.”

According to Lythgoe, as of Wednesday there are no plans to hold a Hero Bowl-type event once the coronavirus outbreak is under control and it’s deemed safe to host events with large attendances. Last week Pennslyvania Gov. Tom Wolf issued a stay-at-home order through April 30, at the earliest, and schools throughout the commonwealth remain closed indefinitely.

“There’s nothing scheduled right now, but some people have made donations and paid for advertisements in the program book,” Lythgoe said. “I’ve spent all day calling them and asking if they want their money back and they all said, ‘No, keep the money and put it towards next year’s.’ In October, we’ll have the run in Springfield and that’s a good moneymaker. I think we’ll survive, we’re doing all right.”

In his 26 years as the chairperson, Lythgoe has never even considered the idea of cancelling the Hero Bowl, until now.

“The only thing we worry about every year is thunderstorms,” he said. “We had some rain delays and lightning delays. One year at Chichester, it absolutely poured. We destroyed their field, it was a shame. One year we had to call the game in the fourth quarter, maybe five minutes left. But nothing like this. We have never had to cancel for something other than weather.”

While the Hero Bowl will not take place next month, you can still support a great cause. Donations can be sent to the Delaware County Hero Scholarship Fund, P.O. Box 924, Media, Pa., 19063. For more information, visit DelcoHeroBowl.com or email Lythgoe at LythgoesR@co.delaware.pa.us.

A message on the website from the Council of Delaware County reads: “We urge the continued support for this worthy cause which enables the children of police, firefighters and emergency medical personnel who die in the line of duty to be able to continue their educations.”