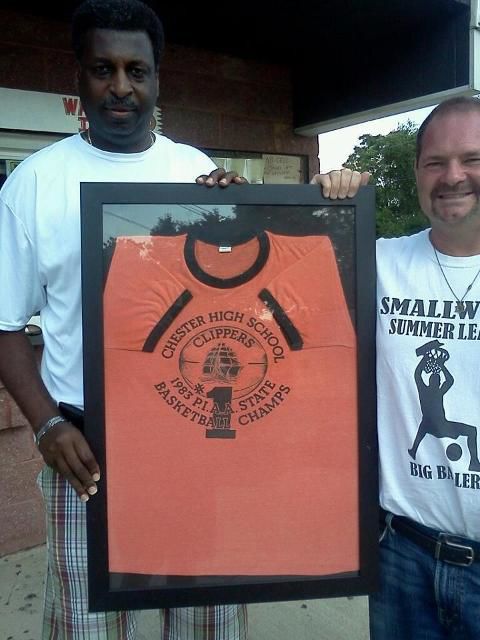 Darrin Pearsall stands with one of Chester High's biggest fans, Dave Burman, when it was announced that the 1983 PIAA state champion Clippers were to be honored by the Delco Athletes Hall of Fame. (Submitted Photo)

A gunshot. A palm tree. A Greyhound bus.

If the first Chester High state basketball championship was to be traced to one of its sturdiest roots, that’s where it all would lead.

Not that Chester hadn’t been a special PIAA program for decades, seven times advancing to state-championship games. But something always got in the way in the end. A bad break. Foul trouble. Unfortunate tournament matchups. Doubt.

Then there would be 1983, and a breakthrough, the first of eight big-school state championships. There were multiple reasons for that, too. One was Darrin Pearsall.

Chester-raised until he was 5, Pearsall relocated with his mother to Los Angeles. There, he found trouble among what he termed, “drug dealers and drug addicts.” By the time he was 15, he recalls, “I was doing things I shouldn’t have been doing.” For that, there would be a night that helped re-define Chester basketball history.

“Two o’clock in the morning,” Pearsall was saying Tuesday, on the phone from his Wilmington, Del., home. “I was selling drugs and whatnot. I was heading back home. Some other gang members attempted to rob me. And I wasn’t willing to give up my money.

“Within seconds, I saw what was going to happen. One of the guys jumped out of the low-rider and just started shooting at me. At that point I was lucky and fortunate enough to jump behind a large palm tree. It was almost like a dream. I don’t know what happened. I had these guys shooting at me. And the next thing I knew, I wound up on my doorstep.”

He wouldn’t be there long. Instead, his mother, Shirley, soon would drop him off at the Greyhound station for a three-day journey to Chester. There, he would be reunited with his grandmother, Mattie Pearsall, and with his uncle, Dr. Earl Pearsall, well-known in Chester at that time for helping to develop young men through, among other things, basketball. To this day, Darrin Pearsall, 54, swears he grew during that cross-country trip, that the sweat suit he was wearing when he left California had snugly conformed to his 6-3 frame but was three inches too short when the bus finally chugged into Delaware County. Maybe it was a miracle. Maybe it was timing. But for Chester basketball, it all would become the right fit.

Under Dr. Pearsall’s care, Darrin continued to grow as a young man and a basketball player. And by the 1982-83 basketball season, he was a 6-7 forward who had begun to intrigue college scouts. That year, he would be a second-team All-Delco player and a critical contributor to that first Clippers championship team. Chances are Chester would have emerged as a state champion at some point. But that episode in L.A. had to have hastened the process. That’s how vital Pearsall, who later would play at Temple, was to the breakthrough season.

In normal circumstances, there wouldn’t have been much urgency for Pearsall to re-live that story 37 years later. But with sports shut down during the coronavirus pandemic, the Daily Times concocted mock Delco Madness tournaments to reveal the greatest boys and girls high school basketball teams in Delaware County history. In that, the 1983 Clippers would be a No. 7 seed in the Sweet 16 field and, for a few weeks, be alive again.

As for one of their top players, he was thankful just to be alive at all.

“My mother died a number of years ago from multiple sclerosis,” Pearsall said. “But I do know it was hard for her to send me away. I was her oldest child. But the one thing she said was, ‘If I don’t send you away, you’re going to die in these streets.’ And by all evidence, I would have actually had that happen. Most of my friends from back then, and we were just about to go into that ‘crack’ generation, have died. They became drug dealers or drug addicts.”

Pearsall became neither. Instead, he has become a successful youth development specialist in Wilmington, also serving in Delaware County, Montgomery County and beyond.

“I have an independent contracting business where I work with high-risk youth,” he said. “I do life-skills development. I do employment-skills training and intensive case management. I’m mentoring. And I work a lot with juveniles.”

He knows how juveniles can stumble into problems, how they can recover, how they can use basketball among other avenues to become college educated, and how to survive. In the mythical Delco Madness tournament, his 1983 team has made it to the Final Four, where Saturday night at 9:45, it will encounter No. 9 Penn Wood, the 2009 state champion.

“I think we were a decent team,” Pearsall said. “There were no superstars, especially as you look at how superstars are today. I think that was a team that grew together over time. And we all knew each other very well because we hung, whether it was during the school year or after school at practice, and definitely in the summer.

“We grew over time. We all knew each other, how we played on the court, some of our limitations, our strengths and things of that nature. So as a group we were very comfortable. And of course there was the pressure of having Coach (Cliff) Wilson there. That was a motivating factor to do the things we were supposed to do on the court. He was extremely demanding. But it wasn’t something that we were fearful of. It was more of a need to be disciplined as a group. And we just fell in line to what the norm is, and what the norm has always been.”

At Chester High, the norm was always basketball success.

By 1983, the norm would become state championships.

Discipline was a critical reason why.