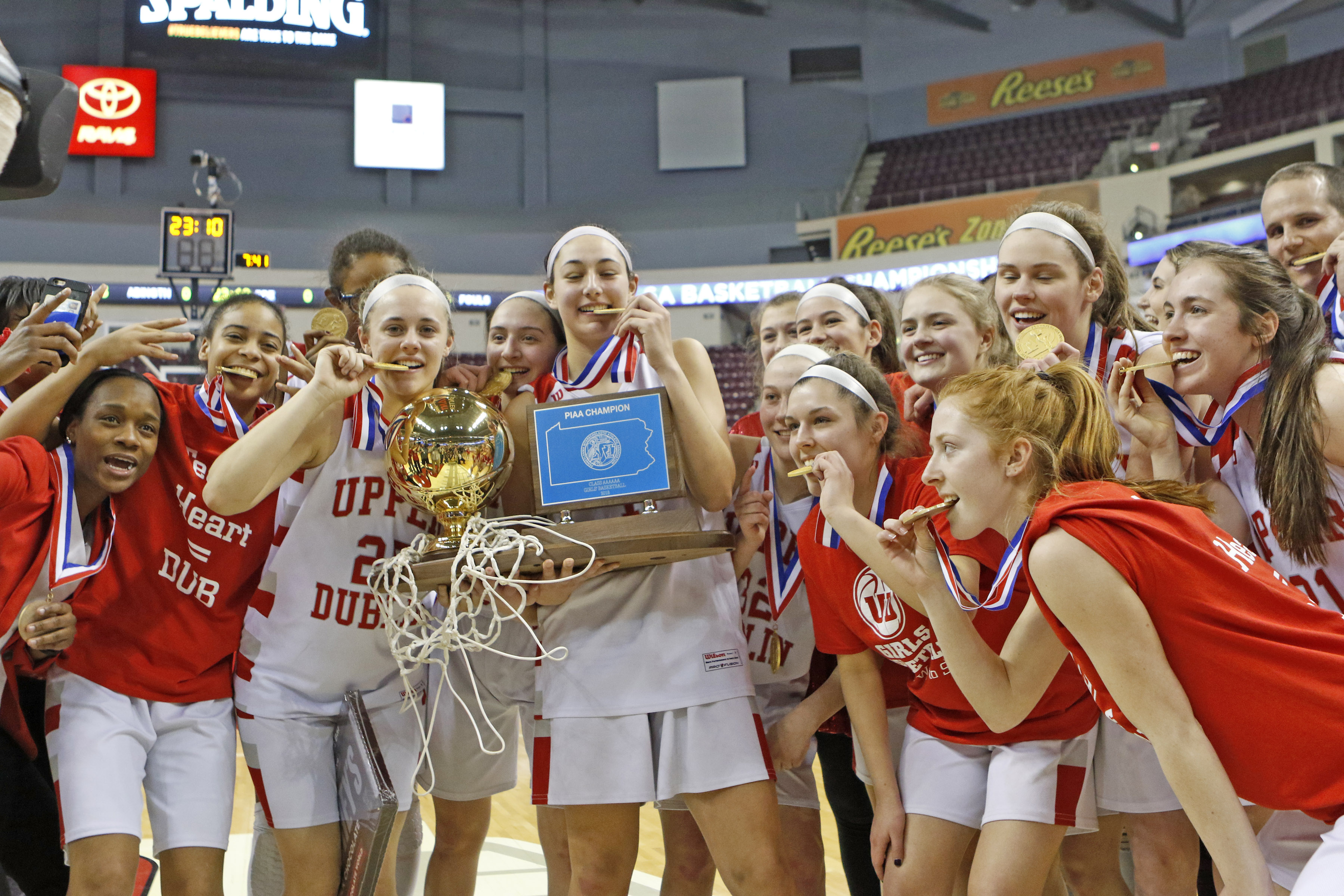 The field is set.

It took much deliberation, conversation and input over the last week but the Reporter/Times Herald/Montgomery Media staff has settled on a bracket to determine the top girls’ basketball team of the 2010 decade. Picking just 16 teams out of an impressive array of contenders built through research and reader suggestions proved an arduous venture.

Every team in the field won at least 20 games and manufactured a run deep into the postseason and most collected some form of trophy or trophies along the way.

Of course, plenty of bubble squads on the outside will be able to claim the same type of accomplishments and some teams will feel snubbed. Not making the bracket should not take away from those teams and what they accomplished but there were only so many spots up for grabs.

No. 1 Archbishop Wood (2015-16): The Vikings were on a mission to avenge several gutting losses the year prior and did so in emphatic fashion. Wood finished the season 25-6 but started just 4-6 against a brutal schedule before closing the season with 21 consecutive victories. Of those 21 wins, all but two had a victory margin of 13 or more points. The Vikings won a PCL title, ending Neumann-Goretti’s 53-game PCL winning streak in the process, claimed a District 12 title and snared a PIAA 3A title with a 46-29 win over District 10 Villa Maria Academy.

No. 2 Central Bucks West (2014-15): With four seniors, three of them Division I recruits, in the starting lineup, the Bucks were an absolute buzzsaw against Southeastern Pennsylvania competition. West racked up wins in bunches, totaling a 32-2 record with its only losses coming against Virginia’s Lake Taylor in an out-of-state holiday tournament and District 3 power Cumberland Valley in the PIAA 4A title game. The Bucks won the inaugural SOL tournament and rolled to a District 1 4A title.

No. 3 Archbishop Wood (2010-11): The middle team in the Vikings’ three-peat of state champions to open the decade did so in relatively commanding fashion. Wood, which graduated just one senior the year prior, racked up a 28-4 record with three of those losses coming to out of state powers Oakton (VA), St. Anthony’s (NY) and Nazareth (NY). The Vikings’ sole loss in state came to PCL nemesis Archbishop Carroll but that was avenged with a two-point win in the PCL title game before Wood added a District 12 title and PIAA 3A championship with a 53-41 win over Mercyhurst Prep.

No. 4 Germantown Academy (2018-19): From the first weekend of the season, the Patriots played with a singular purpose of winning the PAISAA title. For everyone who stood in their way, it almost always meant adding to the loss column as GA rolled to a 30-1 record. GA’s sole loss came to Miami Country Day, a team ranked second in the country when they met but the Patriots brushed it off to record an undefeated Inter-Ac campaign and their first PAISAA title in six years thanks to a loaded, junior-heavy roster.

Central Bucks West’s Nicole Munger goes up for a shot past Cumberland Valley’s Jennifer Falconer during the PIAA Class 4A championship game on Friday, March 20, 2015 at the Giant Center in Hershey. (Bob Raines/MediaNews Group)

No. 5 Souderton (2017-18): With everybody back from a state semifinal appearance the season before, the Indians shouldered their high expectations well. Five seniors, four of them starters, anchored the top six spots in the rotation for a squad that was relentless defensively and efficient offensively. Souderton chalked up a 29-3 overall record against a strong schedule. While they didn’t reach their goal of a state title, falling in the PIAA semifinals, they waged wars against in-season rival CB South for SOL Continental and tournament titles and in a three-overtime classic for the District 1 6A championship.

No. 6 North Penn (2013-14): The Knights (technically they were still the Maidens at the time) blended present and future well in a 26-4 campaign that came with plenty of success. A senior heavy core was supplanted by a talented freshman class that helped North Penn collect an SOL Continental title before winning the program’s first District 1 championship with a 63-51 win over Spring-Ford in the 4A final. North Penn advanced to the state quarterfinals.

No. 7 Mount Saint Joseph (2010-11): It took a lot to best the Magic in the 2010-11 season, which made sense given the roster was loaded with future college players. Mount Saint Joseph compiled a 28-4 season record, started 16-0 and won an AACA title. From there, they navigated a difficult District 1 4A bracket and upended top seed CR North for the championship before advancing all the way to the PIAA semifinal round.

No. 8 Archbishop Carroll (2011-12): A dominant team that defined a dominant era for the Patriots. Carroll’s senior class played in three PIAA championships, with a 56-37 win over Oakland in the 2012 4A championship serving as their second title to cap a 29-2 campaign. Those seniors lost just 15 total games in four years and they added a final PCL title to their resumes with a two-point win over annual nemesis Archbishop Wood in the Catholic League final before adding a District 12 title prior to a states.

No. 9 Archbishop Wood (2009-10): The first Vikings team to lift a PIAA title started a decade of contention in the state tournament. With just one senior on the roster, Wood still managed to compile a 26-5 record while setting the table for what would end up as a state title three-peat. While rival Archbishop Carroll bested Wood in the PCL final, the Vikings got payback in states before knocking off Indiana 49-39 to claim the program’s first state crown.

Abington senior Elizabeth O’Leary holds up the trophy while her teammates surround her after the Ghosts won the District One Class 6A Championship on Saturday, March 4, 2017. (Sam Stewart/Media News Group)

No. 10 Archbishop Wood (2011-12): While the roster had a relatively new look, it didn’t stop the Vikings from hoisting a third straight PIAA 3A title in 2012. Despite losing several significant contributors from the previous two title teams, Wood still surpassed the 20-win milestone with a 21-10 record and reached the PCL final, only to fall to rival Archbishop Carroll at the Palestra. A run through the west bracket led back to Hershey and a 52-33 win over Lancaster Catholic in the state final.

No. 11 Archbishop Wood (2016-17): The 2016 Vikings team that won PCL and state titles had plenty of depth and that depth took over to repeat at the state level. With three new starters and a new rotation of bench pieces, Wood tallied a 25-6 overall mark and won 12 of its 13 games with the only loss coming in the PCL final. A stout defensive squad, the Vikings showed it by allowing just 31 ppg in the state tournament capped with a 34-26 win over Trinity (District 7).

No. 12 Abington (2016-17): One of just two girls’ programs to claim multiple District 1 titles in the largest classification this past decade, the Ghosts were also the first to hoist a Class 6A title after a riveting comeback against Plymouth Whitemarsh. The fourth of six straight teams to make the state tournament, the 2017 Ghosts had just one senior and a knack for making things dramatic. As the No. 8 seed in districts, they knocked off four straight higher seeds to win the title, joining the 09-10 squad as district champs before ending their season in the second round of states with a 23-6 record.

Gwynedd Mercy’s Erica DeCandido (21) goes up for a basket past St Basil defender Natalie Kucowski (24) during first half action of their contest at Gwynedd Mercy Academy on Thursday, Dec. 17, 2015. (Mark C Psoras/MediaNews Group)

No. 13 Gwynedd Mercy Academy (2015-16): A team that wanted to take the next step did so in more ways than one and delivered an all-time state playoff game against the team seeded No. 1 in this bracket. Paced by an accomplished senior class, the Monarchs won an AACA title and avenged a loss to Mount Saint Joseph a year prior before adding a second straight District 1 3A crown. They dominated three rounds of the state tournament before clashing with Archbishop Wood in a five-point loss to finish with a 25-5 record.

No. 14 Saint Basil Academy (2016-17): The PIAA expansion to six classes landed perfectly with the start of a new era in success for the Panthers.  St. Basil started the season with 29 consecutive wins and in the process started AACA and District 3 Class 3A championship streaks that were extended in the 2019-20 season. A loss in the state quarterfinals came as an abrupt ending, but this Panthers teams not only continued the program’s high-standard but left a foundation the following seasons have kept building on.

No. 15 Jenkintown (2017-18): The proverbial breakthrough year for one of the most consistent small-school programs in the state came with the Drakes’ first PIAA title. Jenkintown beat almost everyone, compiling a 31-1 record that included at least one win over a team in every PIAA classification, a BAL tournament title and a District 1 Class A title. The Drakes’ state title run also featured a win over defending champion Lebanon Catholic and an overtime victory over returning finalist Juniata in Hershey to claim the top prize.

No. 16 Upper Dublin (2017-18): The ultimate underdogs, the Cardinals went from not even making the District 1 quarterfinals to winning a PIAA Class 6A championship as a No. 9 seed in just a few short weeks. UD, which went 27-5, won its last eight games including three straight district playback contests. An extremely young roster compiled plenty of clutch moments and won its five state games by just a 5.6 ppg margin.

Look for stories reflecting on some of these teams and breaking down matchups later in the week plus a look at some other standout teams from the past decade. A reader vote will determine the winning team in each fictional contest throughout the bracket.