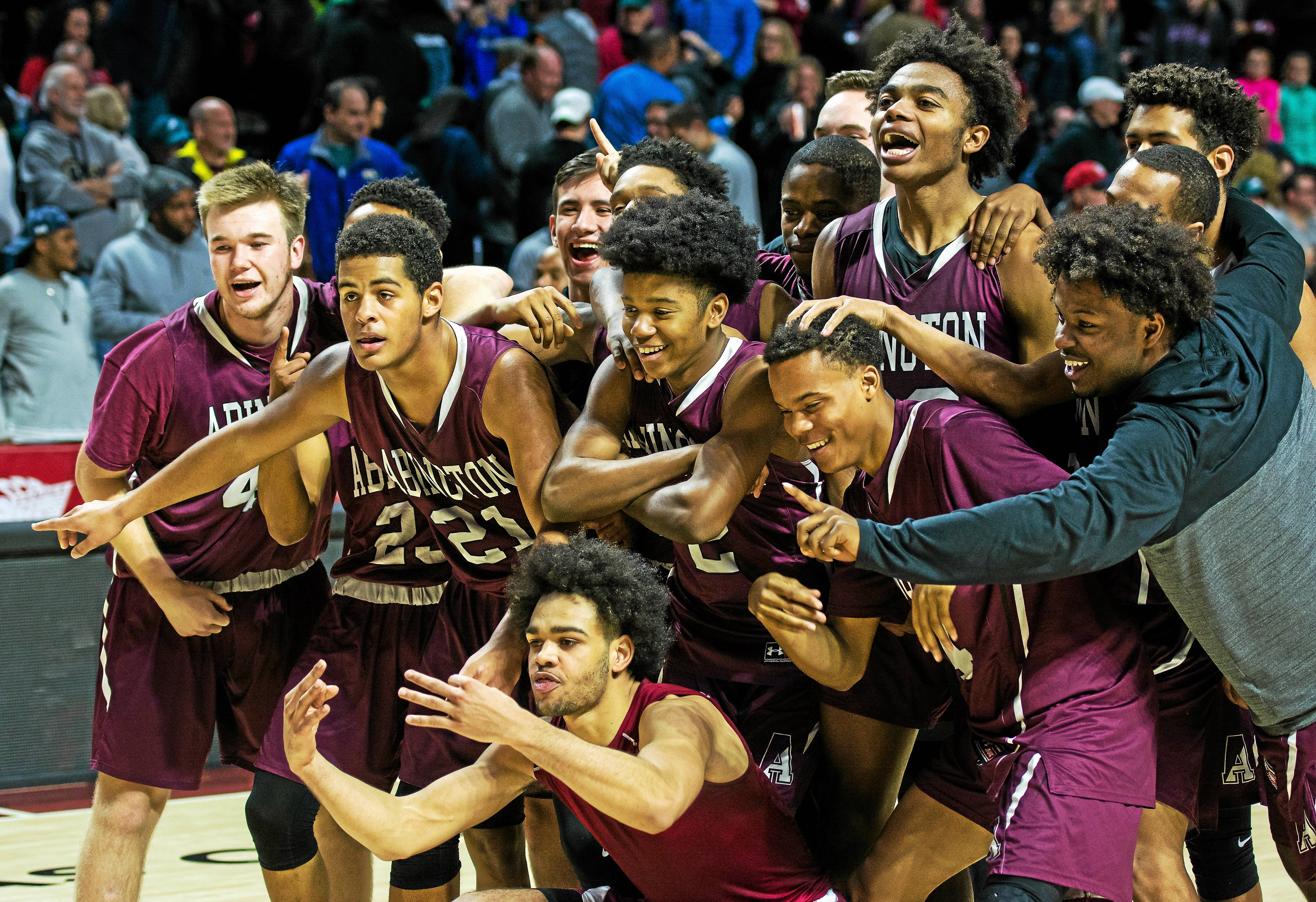 Abington's team celebrates their 2018 District 1 championship win at Temple University. The 2017-2018 Galloping Ghosts are the fifth seed in the Reporter/Times Herald/Montgomery Best of the 2010s Tournament. (Adrianna Lynch/For MediaNews Group)

After hours of deliberation, the Reporter/Times Herald/Montgomery Media sports staff is ready to reveal the field for the best boys basketball team of the 2010s.

These teams all have common characteristics. Every team in the field won at least 20 games and made a deep postseason run. A great decade of boys basketball means some other teams punched these boxes, but were left on the outside looking in. As is the case with the NCAA Tournament, there will certainly be teams feeling like they were snubbed.

No. 1 Plymouth Whitemarsh 2009-10 >> The Colonials started the decade with a team that has as good of a chance as any to come out of this tournament on top. Plymouth Whitemarsh went 30-2 in the 2009-10 season. The first lost came against nationally ranked St. Benedict’s Prep by two points and the second came in overtime of the District 1 championship against Penn Wood, a game in which the Colonials missed over 20 free throws. The Suburban One League American Conference champs got their revenge three weeks later, beating Penn Wood for the state championship, 58-51.

No. 2 Archbishop Wood 2016-17 >> The Vikings hit the most coveted trifecta in the state of Pennsylvania in 2016-17. They won the Philadelphia Catholic League title over Neumann-Goretti, the District 12 crown over Martin Luther King and the state championship over Meadville. During their 9-0 playoff run, the 28-3 Vikings won by an average margin of 21.8 points per game.

No. 3 Archbishop Carroll 2014-15 >> The Patriots finished the 2014-15 season with a 23-7 record, but no championships. They lost to eventual Philadelphia Catholic League and PIAA-4A state champion, Roman Catholic, by three points in the PCL semifinals and PCL runner-up and PIAA-3A state champion, Neumann-Goretti, by two points in the state title game.

No 4. Abington 2013-14 >> The top ranked Abington team of the 2010s in the 2013-14 team. The Ghosts went 25-6 and won the SOL National Conference championship. They reached the District 1 quarterfinals and state semifinals. This season was the beginning of a stretch of dominance for Abington that lasted the rest of the decade.

No. 5 Abington 2017-18 >> Not the first Abington team on the list and not the last. The 2017-18 Ghosts went 27-6 and won an SOL National title. They won their second consecutive District 1 championship and reached the state quarterfinals.

No. 6 Abington 2018-19 >> The third and final Abington team on the list. This group lost its leader from the 2017-18 team and responded with a 28-2 year. The Ghosts won another SOL National title, a third straight District 1 championship and the got to the second round of states.

No. 7 Plymouth Whitemarsh 2015-16 >> The Colonials reached the District 1 Final Four four straight years from 2015 to 2018. The 2015-16 team was the only one to come away with a championship. The SOL American champs went 28-3 — losing a regular season game against Upper Merion, a postseason tournament game against CB West and a state semifinal against a star-studded Roman Catholic team.

No. 9 Plymouth Whitemarsh 2017-18 >> The Colonials started the season 27-0 and finished 28-2. The SOL American and SOL Tournament champs lost to Abington in the district title game and fell to Roman in the second round of states.

No. 10 Pennridge 2018-19 >> The Rams posted their best season in school history in 2018-19. The SOL Continental champs went 27-6 and reached the District 1 semifinals and state championship game.

No. 12 Archbishop Wood 2018-19 >> Two years removed from a state championship, the Vikings returned to the title game in 2019. Wood finished the season as the second best team in the state in the 5A classification with a 20-9 record.

No. 13 La Salle 2013-14 >> La Salle won state playoff games over District 1 powers Lower Merion and Chester en route to the PIAA-4A title game in 2013-14. The Explorers season ended with a loss against an undefeated New Castle team to bring their record to 23-7.

No. 16 Lower Moreland 2018-19 >> The Lions may be the Cinderella of this dance, but they certainly belong. Lower Moreland finished the year with a 28-4 record. The Lions won the Bicentennial Athletic League Independence championship, BAL tournament championship and District 1-4A championship. Their season ended in the state semifinals.

Later this week we will breakdown these matchups and post them online for our readers to decide who advances to the next round. We will also take a look at some suggested teams that didn’t make it into the field-of-16.

Delco Madness: John Waller’s 1992 TCA Crusaders were never out of place in a tournament
Field set in Reporter/Times Herald/Montgomery girls basketball team of the decade tournament