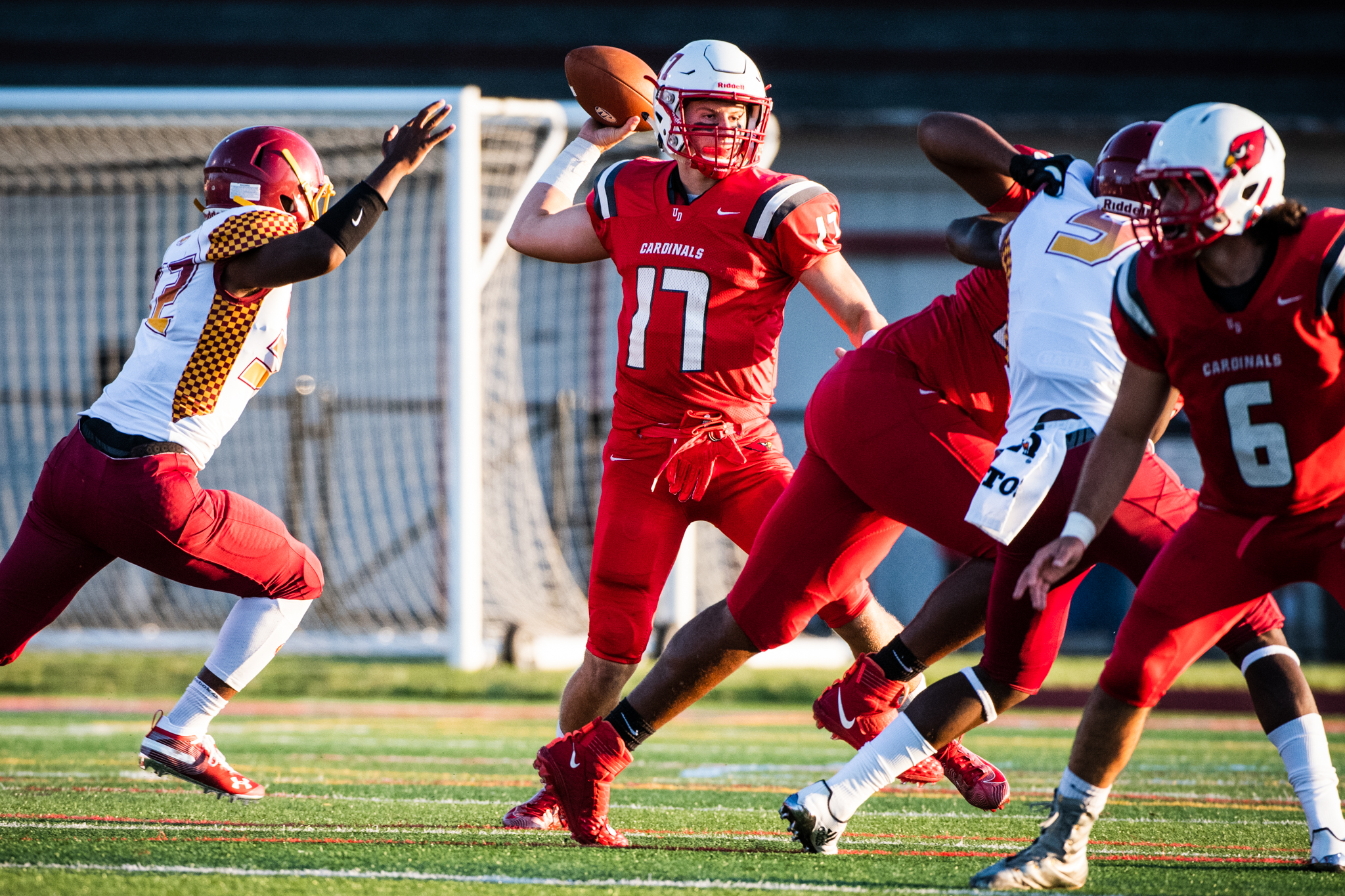 Mike Slivka never gave up on his dream, even when things got their lowest.

When a devastating knee injury robbed the Upper Dublin senior of most of his final season, Slivka had some doubt college football was in his future but he refused to give up. Through it all, one college didn’t give up on him either.

Slivka’s dream came true on March 3 when he committed to continue his academic and athletic career at Colgate.

“It was very hard for a long period of time,” Slivka said. “Everyone sort of went away from me because they had to go scout everyone else who was healthy and if they did come back, it would be last minute. I had my doubts but it’s been a dream since I was a little kid. Even with the doubts, I never gave up on that.”

A three-year varsity player for Upper Dublin, Slivka began his career as a sophomore playing free safety on defense and a little receiver on offense. His future on the offensive side was under center and as a junior, he helped lead the Cardinals to a District 1 5A title and PIAA 5A semfinal appearance.

Defensively, his gains in the weight room made him more of a fit at strong safety and a hybrid outside linebacker which put him on Colgate’s radar. Slivka made his first visit to the New York university last spring and made a good impression.

“I did a camp last spring, they looked at me at linebacker and they said they really liked me,” Slivka said. “When I tore my ACL, the coaches reached out and said ‘we’re not going to give up on you.’ They wanted to stay in contact, they told me it would probably have to be last-minute but it was a good sign they didn’t want to give up on me because of my knee.”

Slivka and the Cardinals got off to a strong start in the fall, opening 3-0 but with the senior initially injuring his knee against Hatboro-Horsham. A week later against a loaded Penn Charter team, Slivka went down again and wouldn’t get the chance to suit up for UD again, tearing an ACL and ending his season.

It was among the first dominoes to fall in a string of injuries that curtailed the Cardinals’ season as Slivka was unfortunately joined by more and more teammates on the sideline by the end of the year. Unsure of what his future held, Slivka felt he got stronger for having the game taken away from him.

“With the injury, I learned I have a lot of loving, caring people in my life,” Slivka said. “It’s also given me the opportunity to inspire people and try to help them through whatever things they’re going through. An injury, it happens, but a lot of people go through a lot worse and I hope I did a good job using my injury as inspiration in helping others.”

“He’s been so good to me, he helped me through the process and I built such a relationship with him, I wish I got to finish the year playing under him,” Slivka said. “He’s not just a coach, he’s a great friend to me. I loved playing for him and I’m going to miss playing for him. When I was crying, when I was going through it, he was there for me and all the other coaches were there for me.”

For the rest of the season, players and coaches from opposing teams went out of their way to find Slivka after games to offer encouragement and respect. Cheltenham coach Ryan Nase was among them and one of the first to take to Twitter to congratulate Slivka when he announced his signing with Colgate.

The coaches in the SOL American also voted Slivka to All-SOL honors despite his playing just one conference game and the support wasn’t lost on the UD senior.

“I got to talk to a lot of kids from the other teams and build relationships,” Slivka said. “It’s cool, I’m going to be able to say I played against those guys as they move on, and I just have so much respect for the other players and coaches. It makes you feel good that people respect you like that.”

Slivka said his rehab is going well and he’s started lifting and running again just recently. He’s hopeful his next doctor visit will push him to the next stage, which includes cutting and more agility work but he’s not rushing things either.

While like any competitor, he hopes to return as soon as possible, Slivka said he was open to the idea of a redshirt year if he or the coaching staff at Colgate felt he wasn’t 100 percent ready when training camp open. The coaching staff plans to use Slivka as an outside linebacker.

Slivka, who has a 4.16 GPA, said he’s not sure what he wants to study in college but hopes to coach football when his playing days come to an end. He joked that Stover told him to come for the Upper Dublin job when Stover retires and he can’t see himself getting too far removed from the game.

“I got to be close with a lot of people on our team, our coaches, kids in our school and teachers and even though our season didn’t go as we wanted, it brought us all together,” Slivka said. “I became so much closer with my friends and a lot of people I didn’t know before because of it.”