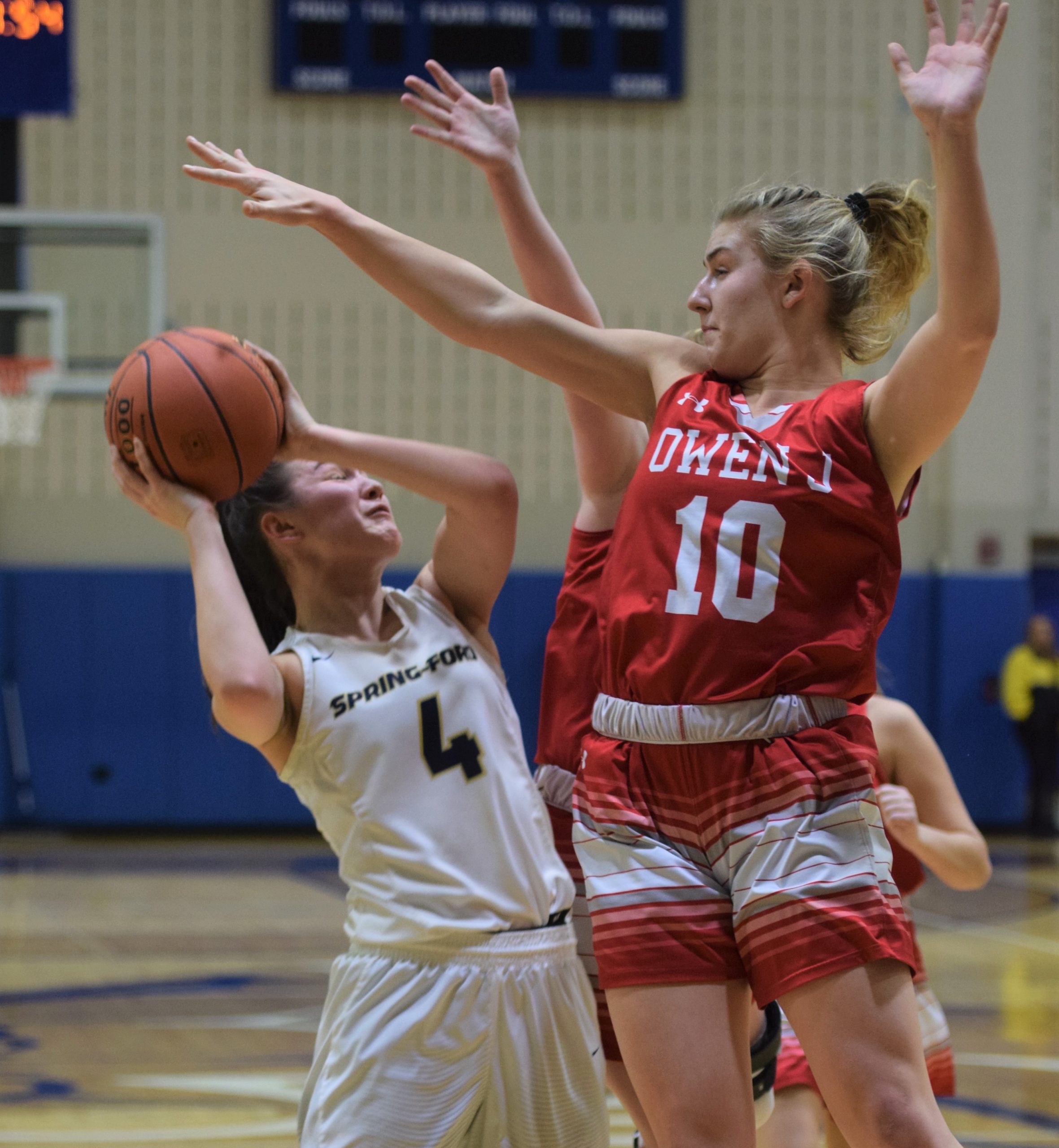 One of these things is not like the other.

Three Pioneer Athletic Conference girls basketball teams qualified for the PIAA Class 6A Championships, which begins Friday around the state.

Spring-Ford and Methacton return to the tournament after qualifying last season. Meanwhile, Owen J. Roberts is making the program’s first appearance in the big dance, the reward of a clutch run through the playbacks of the District 1 tournament.

While Spring-Ford and Methacton are entering in the midst of respective two- and three-game losing streaks, the senior-led Wildcats are riding high with three straight dramatic wins on the road to win the eight-team playback to place ninth.

“It’s been pretty unbelievable,” said OJR senior forward Brooke Greenawald. “Our team has the ability to beat almost anyone we play, it’s just that we have to be in the right mindset. I’m really happy that we all pulled together.”

As one of four seniors in the starting lineup along with Olivia LeClaire, Hannah Clay and Maddi Koury, Greenawald and her classmates understand the stakes more than most: it’s not just the end of a season, it’s the end of their scholastic careers together.

“I think a big moment was probably when we lost our chance at (winning) districts,” Greenawald said. “We all realized that this could be the end of our season if we don’t win the next game. All of us don’t want this to end especially since we have such a big senior class. We all have this desire to push through so it wouldn’t end.”

At 20-9, the Wildcats have the most single-season wins in program history and will look to add another Friday night when they take on three-time reigning District 2 champion Hazleton at Berwick High School.

It’s a 30-minute ride for Hazleton, a two-hour trek for OJR. But hitting the road and playing in partisan environments have become the forte of veteran coach Jeremy Mellon’s squad over the last three weeks since entering District 1 playbacks following a second-round loss to nemesis Spring-Ford.

The No. 14 seed Wildcats escaped the rally attempt of No. 6 Ridley, 52-49 in overtime, on Feb. 22 while LeClaire became the program’s all-time leading scorer. The Wildcats then made key stops late to hold off No. 7 seed and defending district champion and PIAA finalist Garnet Valley, 42-41, on Feb. 26 to clinch a spot in states. OJR kept the streak going with a 42-40 overtime win at No. 12 Souderton to secure District 1’s No. 9 seed.

“I knew all the games at this point were going to be close since any team that has made it this far deserves to be there. I feel like our team is really good at not worrying about the score as much as just playing,” Greenawald said. “All the starters and everyone off the bench, we just push through and try to not worry when it’s getting close and know that our skills will push us through.” LeClaire (13.0 ppg) and sophomore point guard Avery White (13.1 ppg) are the Wildcats’ primary scoring threats while Clay (7.6 ppg) is a strong three-point threat and gritty presence. Greenawald averages 5.3 points per game and leads the rebounding charge with LeClaire, a category that has been a big strength for OJR this season. Koury is a shutdown defender to round out the starting five. First off the bench is senior Emily Schall, junior Allie Iyoob and freshman Gabbi Koury.

Hazleton is 21-5 and was runner-up to Lake-Lehman in the Wyoming Valley Conference tournament in the regular season. The Cougars cruised through the District 2/4 Subregional with wins over Scranton (65-47) and Williamsport (58-34).

Under 25th year coach Joe Gavio, Hazleton is led by four-year starter and 1,000-point scorer Marissa Trivelpiece (14.0 ppg, 6.8 rpg), junior guard Olivia Wolk (12.5 ppg) and senior three-year starter Faith Grula (9.4 ppg). Trivelpiece is a multi-sport standout who was the WVC Division 1 Player of the Year this winter and is also a Division I softball recruit (Michigan State) that led the Cougars to the PIAA final in 2019. Also in the starting lineup is senior Kyra Antolick (5.6 ppg, 91 steals), the team’s top defensive player, and junior guard Brooke Boretski (6.4 ppg).

The Cougars are making their third straight PIAA playoff appearance but have never made it past the quarterfinals. Last year they topped Central Bucks West 40-38 at the buzzer but were blown out by Neshaminy in the second round.

There’s no such history for the Wildcats, a fact this season’s OJR team can wear as a badge of honor forever.

“It’s been a long time. For us, we’ve been playing for four years and never have come this close to states, let alone making it,” Greenawald said. “You definitely feel some pride, even just going to practice and realizing we’re still there and still have work to do.”

A breakdown of the other PIAA 6A matchups involving PAC teams: Road to states >> Spring-Ford reached the state tournament by making the District 1 semifinals for the third straight year, losing to eventual champion Central Bucks West 49-45. The No. 3 seeds lost to No. 1 seed Plymouth-Whitemarsh 56-42 in the third-place game. … Parkland beat Stroudsburg 43-33 to qualify for state play and beat Pocono Mountain West 45-39 to take third place in District 11 Class 6A.

On Parkland >> Parkland has made states in six of the last eight years but hasn’t had a PIAA playoff win since 2014. Lindsay Berger, a 6-2 junior, scored 20 and 19 points in a pair of District 11 victories and averages a team-best 13.2 points per game. Junior Sonya Shivok has elevated her play of late to emerge as a No. 2 scorer.

On Central York >> Central York returns to states after being the District 3 runner-up in 2017-18 but missing out on the tournament last season. Junior guard Sarah Berman scores a team-high 11.6 points per game (61 3s), followed by 6-0 senior forward Emily Prowell. Freshman Mackenzie Wright Rawls has given a spark to CY with a 5.8 scoring average while leading the team in assists, rebounds and steals per game. Fellow freshman Bella Chimienti is another key scoring contributor at 7.9 ppg.