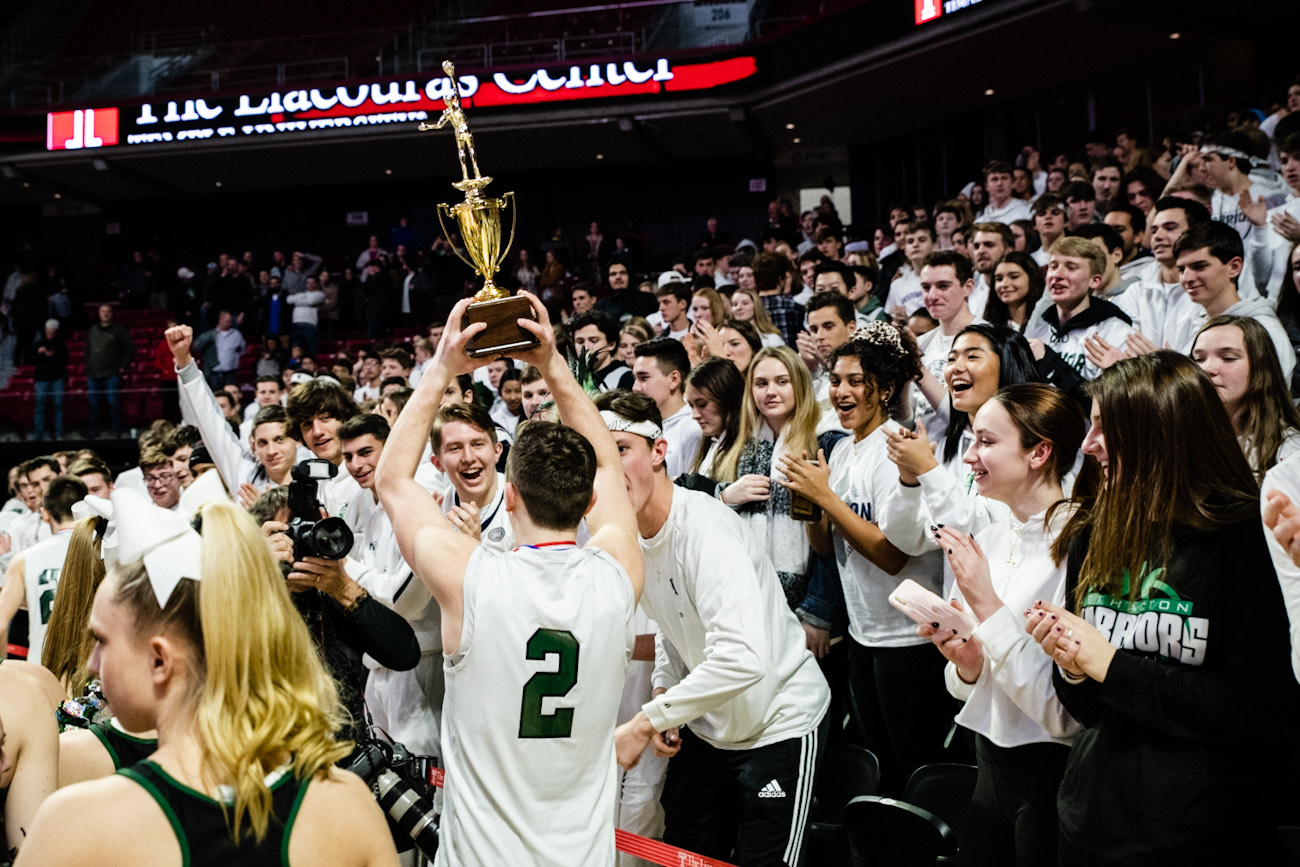 Methacton’s Owen Kropp (2) walks through the Methacton student section with the newly won District 1-6A championship trophy after the Warriors' 73-48 win over Cheltenham in the district final on Saturday, Feb. 29, 2020 at the Liacouras Center in Philadelphia. (James Beaver/For MediaNews Group)

It’s a motto Methacton has lived by all season. It means turn a good shot into a great shot, turn a good effort defensively into a great one and a good performance into a great one. With only Cheltenham standing between them and a District 1 title, the No. 1 Warriors made good to great a creed to live by at the Liacouras Center.

With a clinical offensive showing, Methacton raced past No. 3 Cheltenham 73-48 a Temple to capture the program’s first District 1 6A championship Saturday night.

“Credit everybody who was out on the court tonight,” Warriors senior center Jeff Woodward said. “Coach (Jeff Derstine) always talks about going good to great and there were countless times in this game, especially that first half where we kicked it to somebody who was wide open.”

BOYS BASKETBALL FINAL: (1) Methacton 73, (3) Cheltenham 48
Top-seeded Warriors finish the quest for first District 1 title with another outstanding showing
Cheltenham did all it could but Warriors had too much pic.twitter.com/jUXtNRbUv3 Methacton’s Erik Timko (20) takes a shot to the face on his way to the net Saturday night against Cheltenham in the District 1-6A championship game.
(James Beaver/For MediaNews Group)

Cheltenham didn’t have a true answer for Woodward, the 6-foot-10, 250-pound Colgate bound big man. For reference, the Panthers’ tallest player is 6-foot-6 David Pope who coach Patrick Fleury estimated at about 160 pounds and plenty of possessions saw Jaelen McGlone or Brandon Scott trying to deal with Woodward.

It would have been easy for the Warriors to try and force feed the big guy but that wouldn’t have been great, much less good. So they moved the ball around instead, with senior Brett Eberly playing conductor to an orchestral section that was totally in tune.

Erik Timko came out in form and never really lost it, hitting his first seven shots on his way to a game-high 27 points.

“I came out, played with confidence and played my game,” Timko said. “My guys had trust in me and they helped me get open to get those clean looks.” A 6-4 Methacton lead ballooned into a 19-7 edge at the end of the first thanks to a 10-0 run and a three by Timko assisted by Eberly with 6.5 left on the clock in the period.

Cheltenham, keyed by Rider recruit McGlone, made a run to open the second quarter and closed within 22-14 with 6:47 left in the half. Timko bookended a Brett Byrne three with a pair of hoops in response to re-open the lead and Cheltenham never mounted a consistent run again.

“They played, very hard, we didn’t make shots we normally could make but (Methacton) is a very good team and my hat’s off to them,” Fleury said. “For us, I think we came out flat and we got that one run and never really got another one. I blame myself for that one.”

The final score doesn’t reflect it, but the Panthers didn’t play poorly. They attacked the rim, made passes and got shots from behind the arc but Methacton just got more and made more of those type of looks.

Certainly, Woodward had an influence, blocking five shots and altering several more while collecting 11 rebounds for his second double-double in as many games at Temple. He also scored plenty, dropping 20 points including a drop-step dunk in the third quarter that pushed the Warriors up 59-29.

“We really wanted to control the pace, that was the biggest thing for us,” Woodward said. “They have some really good players. (Justin) Moore, the sophomore is a good player who is only going to get better, McGlone is a great talent so we knew what we had to do to take them out of their rhythm.

“They play really hard, they play with a lot of energy so we knew we had to match that energy. We kept looking in and looking to do what we do best and it worked out in the end.” Timko, who scored nine in the first, added six points and two helpers in the second quarter with Methacton getting a spark from Cole Hargrove’s two 3-pointers and Eberly dishing a few more assists for a 43-21 halftime lead. Eberly, who didn’t score until the fourth quarter, had nine assists while also deftly handling Cheltenham’s quick and turnover-hunting defenders.

After a slow start against Chester in Tuesday’s semifinals, the Warriors rolled in both games at the Liacouras Center.

“I feel like we came into this game really prepared,” Timko said. “We knew what to expect. We played here, so that helped and I feel like we just came out with a lot of confidence.”

The machine didn’t slow in the third quarter and any score by Cheltenham was met by a flurry of Methacton buckets, usually assisted, in retort. Woodward had seven of his 20 in the quarter, the dunk coming late in the frame as the Warriors again just worked, worked and wore down an opponent.

“We always talk about ‘Why bail a team out?’,” Woodward said. “If they’re working that hard, we need to work just as hard if not harder to get good looks and get great shots. We don’t care how long our possessions is, we’ll work until we get the shot we want.” Eberly’s three in the fourth got all five starters into the book while Timko scored on a slick up-and-under move to reach his 27th point before both teams started to go into their benches. The Panthers’ effort never waned but it was only a matter of time before the Warriors could hoist their trophy and share it with the travelling fans.

Fleury said he was looking forward to reviewing the tape and seeing ways he could continue to help his players make the game easier on themselves.

“I look at the last two minutes where the kids didn’t give in and they stuck to the plan,” Fleury said. “They played hard and for me, now I get a chance to watch the 1-1-3 (Methacton plays) and didn’t get the shots or the looks. For me, it’s in the finer details but Methacton played well and they deserve it.” Both teams advance into next week’s 6A state tournament and had a similar feeling about it. It’s a fresh start and nothing is a given.

“We’ve been guaranteed a next game, even tonight,” Woodward said. “Starting next Saturday, there’s no guarantee of anything so the big message this week is we’re really going to have to put our heads down and really have to play a solid game the way we want to if we want to keep playing.”