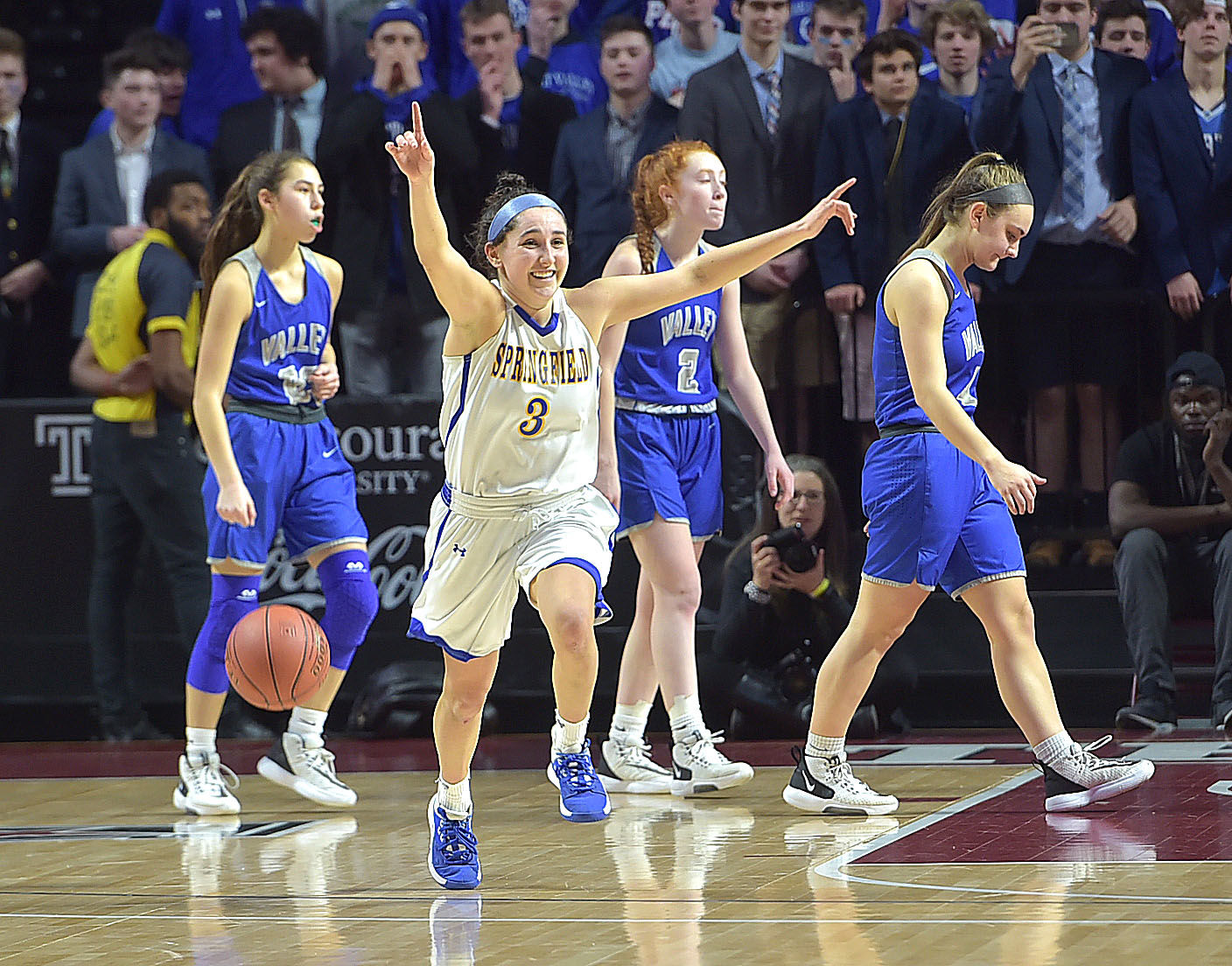 Springfield's Alyssa Long does a victory dash off on the floor at Liacouras Center as Great Valley players walk off in defeat after the Cougars nipped the Patriots, 29-27, in a District 1 Class 5A championship game Saturday at Temple. (PETE BANNAN/MEDIANEWS GROUP)

PHILADELPHIA — Alexa Abbonizio motioned to the Springfield cheering section to get loud.

Fired up after drilling a 3-pointer to end the third quarter, Abbonizio knew she had just made the biggest shot of her life. And it happened in the biggest game, the District 1 Class 5A championship at Temple University’s Liacouras Center Saturday afternoon.

Abbonizio’s clutch trey came amid a defensive slugfest between No. 1 Springfield and No. 3 Great Valley. Thanks to Abbonizio’s long-distance spark, Springfield had all the confidence it needed to complete the job.

“That lifted everyone,” Abbonizio said. “It got us hyped, it got me hyped, and we came out in the fourth quarter and were ready to play.”

The Cougars properly motivated for the fourth quarter, Alyssa Long did the scoring damage, accounting for all eight of her team’s points, all coming from the free throw line, as Springfield held strong for a 29-27 victory and the District 1 Class 5A district championship. PETE BANNAN – MEDIANEWS GROUP
Springfield’s Alexa Abbonizio goes up for a long-distance shot in the second half Saturday at Temple’s Liacouras Center. Abbonizio’s 3-pointer at the end of the third quarter helped key a 29-27 Cougars victory over Great Valley in the PIAA District 1 Class 5A championship game.

It marked Springfield’s second district title in four seasons, both under the guidance of head coach Ky McNichol. Long, Carli Johnston and Jordan Postiglione — three-fifths of the team’s starting lineup — were freshmen when the Cougars won it all in 2017.

“We wanted to come back after losing the Central League championship. We all had that mindset that we were not losing two championships in one season, that just wasn’t going to happen,” said Abbonizio, who produced nine points, five rebounds and a steal. “We came out here and gave it our all.”

Springfield beat its toughest challenges for the title in Mount St. Joseph and Great Valley, erasing the memory of two straight years of district tournament frustrations. While their 2020 season continues in the PIAA tournament, in some strange way, the win felt like closure for the Cougars (23-5).

“It’s like a storybook ending, it’s how you always dream for a season to turn out,” Long said. “To get it with this group of girls, the chemistry we have, the love that we have for each other, it’s really special.” McNichol asked players at practice Friday what they could bring to the game. Some responded with words such as “positive leadership,” others said “hustle” and “intensity.” McNichol waited to until Saturday to give her word for her team.

“Before I left the locker room, I said my word is ‘heart,'” she said. “Go out there and leave your hearts on the floor, like I know you will. That’s exactly what they did today. We may have not played our best basketball game, but we did enough to win.”

Great Valley went on a 9-0 run in the second quarter to take a 14-9 advantage, its largest of the game. The Cougars came back in the final minutes before halftime, Abbonizio scoring on a layup and Long banking a 3-pointer to tie the game at 14-14. Officials let players get away with hard contact. There were times when Abbonizio, in particular, was visibly upset, and for good reason. One such incident came in the fourth quarter while dribbling the ball near mid-court. Abbonizio was bumped on two occasions, which easily could have earned a foul call, but the referee instead blew the whistle for a double-dribble violation.

The Cougars kept their composure. Long made sure of it.

“We always try to bring positivity and next-play mentality,” Long said. “I try to reiterate that with everyone, that we can’t control the officials. We have to control the controllables, which is what we talk about. It’s always about moving on to the next play, because sometimes a play doesn’t go our way.”

Long was not at all nervous when taking her foul shots in the fourth quarter. She was the best person for the job. The University of North Carolina lacrosse commit is used to pressure-packed situations.

“My dad has always said … championships can be won at the foul line, they’re free points,” she said. “I have that etched into my brain, so when I step up to the line it’s just like another shot for me. I’m glad I could put them in today to get us a win.” Freshman Mia Valerio made a steal in the fourth quarter to thwart Great Valley’s attempt to rally. Moment earlier, Great Valley’s Tessa Liberatoscioli connected on a 3-pointer to trim Springfield’s lead to 29-27. Liberatoscioli, the Patriots’ lone senior, and point guard Emily DuPont were focal points for the Cougars’ defense. They were limited to nine points apiece.

Liberatoscioli hit a 3-ball in the final seconds of regulation to complete the scoring. Great Valley missed 11 of its first 12 field goal attempts in the second half.

Springfield’s defense forced 15 Great Valley turnovers, including 10 in the first half. The Cougars were able to win despite making only two baskets in the second half, none after Abbonizio’s buzzer-beater in the third period. Great Valley also owned a 26-16 advantage in rebounding.

Springfield won the battle on the scoreboard and that’s the only thing that matters. The cheering section Abbonizio implored to make noise was a bit sparse, but for good reason. Springfield’s students were busy attending to other, more important matters Saturday.

“We had our Mini-THON, which is 15 hours to raise money for kids with cancer,” Long said. “We raise something like six figures every year, so that’s a huge deal for the community. Our students were there, but they were live broadcasting the game in the auditorium.

“I know they were cheering for us back in Springfield. Now we get to bring the trophy back to them and celebrate.”