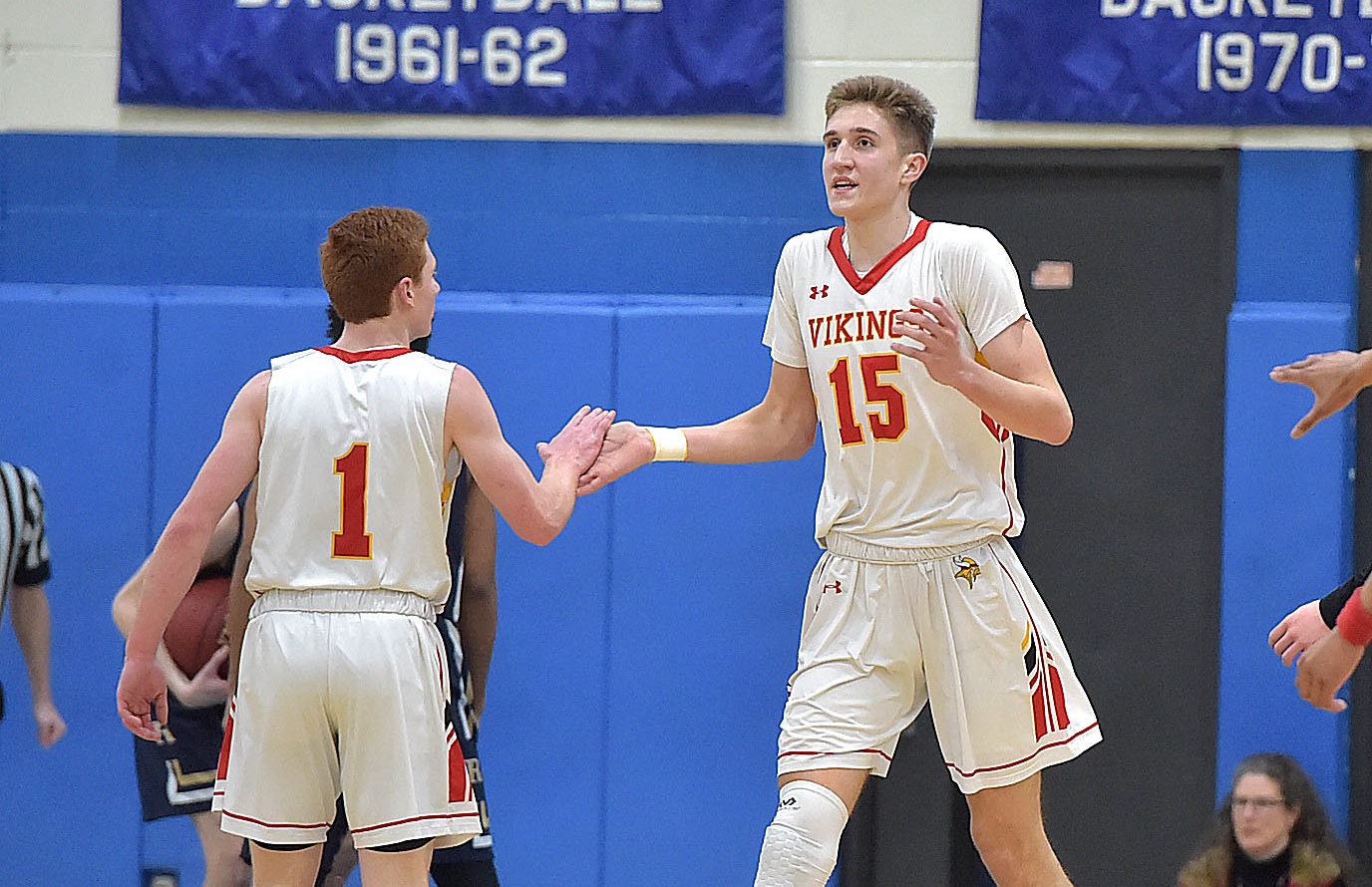 Since that day, the Vikings made a promise to get back to Temple University’s Liacouras Center for the championship game this season.

West Chester East’s (15) Andrew Carr dunks in the first quarter of the semi-final of the District 1 5A playoffs against West Chester Rustin at Norristown Area High School Wednesday. (PETE BANNAN)

Consider that a promise kept.

Wednesday night at Norristown High School, West Chester East used a sterling defensive performance to limit crosstown rival West Chester Rustin to just 36 points, and the Vikings ran away with a convincing 50-36 win over the Golden Knights. West Chester East will now play Penn Wood at Temple on Saturday (3 p.m.), while Rustin will travel to Penncrest Friday night in the Class 5A third place game.

“The guard play on defense was really something for us tonight,” West Chester East coach Tom Durant said. “We had to slow down the hot shooting of Griffin Barrouk who can get hot at any time and control IV Pettit. The kids executed very well tonight. Last year the Sun Valley game left a sour taste in our mouths so this year we want to go down and finish the job.”

West Chester East held the hot shooting Barrouk to just two points and Pettit had a team-high 14 points, but most of them came late in the game when the outcome was pretty much decided. The Vikings used their zone defense to limit the Golden Knights to just 15 first-half points and the Vikings did not make a 3-pointer all night.

With a 22-15 lead at intermission, the Vikings broke the game open by outscoring the Golden Knights, 18-8, in the third quarter. After Dan Wethey scored the first basket of the third for Rustin, the Vikings went on a roll.

Richardson took a feed from Carr to score in tight for a 24-17 lead. After a Rustin turnover, the Vikings ran the floor and Mike Dedda hit Carr on the wing. Carr took two giant steps and threw the ball down with authority for a 26-17 lead and you could feel the Rustin hopes going down the drain.

After a Rustin miss, Carr drained a 3-pointer for a 29-17 lead. Jack Kushner took a feed from Dedda to score in tight and the Vikings were suddenly up 31-17 and Rustin coach Keith Cochran called a timeout.

“We made it a point to get back to Temple after last year,” Carr said. “And tonight, we won the game with our defense. We shut down Barrouk, who is a great shooter and he can get hot at any time. We changed up our zones a little and our matchups from the last time we played them.”

West Chester East’s (15) Andrew Carr pulls down a rebound in the fourth quarter of the semi-final of the District 1 5A playoffs against West Chester Rustin at Norristown Area High School Wednesday. (PETE BANNAN)

West Chester East held a 36-23 lead late in the third period but after a Rustin turnover, Carr scored on a follow for a 38-23 Vikings lead and Richardson finished the third by driving the lane and scoring in tight, and it was a 40-23 Viking lead after three periods.

“Last year was a really bitter pill losing to Sun Valley,” Richardson said. “I was heartbroken when we lost last year so this year we have to go down and seal the championship. We hope to do that Saturday.”

West Chester East shot a red hot 20 for 36 from the field with only three 3-pointers. Most of the Vikings’ points were in the paint or on follows by Carr.

“It is disappointing to get here and not play your best game,” said Rustin coach Keith Cochran. “But, give West Chester East credit. They did what they had to do and you have to play your best game just to be in the game with them.”