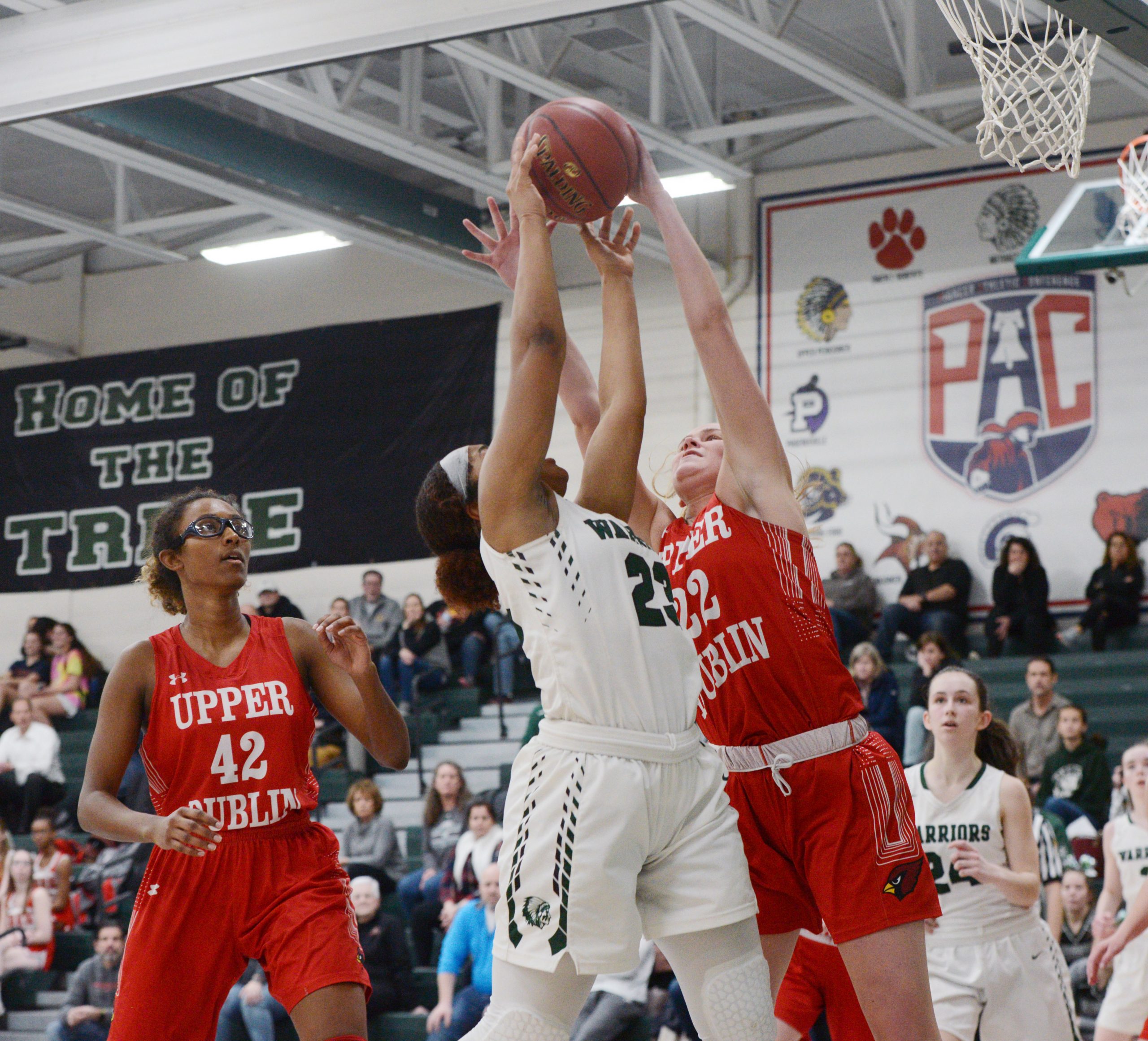 Fairview Village >> Methacton and Upper Dublin would have both much rather been playing in the District 1 semifinals at Souderton High School on Tuesday night.

Instead, the fifth-seeded Warriors and eighth-seeded Cardinals met up in a district playback game at Methacton with state playoff seeding on the line.

Upper Dublin’s 47-45 victory over Methacton didn’t have the fanfare of the district semifinal, but don’t go thinking the game had diminished value. UD coach Morgan Funsten knows that better than anyone.

The Cardinals, who missed out on the District 1 semifinals in each of the past three seasons, are in the same spot they were a season ago when they won two playback games to finish as District 1’s fifth seed. That led to advancing to the PIAA semifinals for the second year in a row. District 1 has been well represented at the state level, sending four representatives to the PIAA Class 6A championship in the three seasons since the expansion to six classifications in 2016-17.

The success has often been from schools like the Cardinals or Warriors that missed out on the district semifinals. Just ask the 2017 Boyertown team (District 1’s sixth seed) or the 2018 Upper Dublin squad (District 1’s ninth seed), which both won state titles.

In the last three seasons, District 1’s fifth through eighth seeds — where Upper Dublin and Methacton will both fall — have combined for 20 state playoff wins. Only two of those 12 teams have failed to advance past the first round.

That kind of success gives the two district playback games for District 1’s quarterfinal losers some extra meaning. While playing for a District 1 title was each team’s ultimate goal, the playbacks give both teams — which qualified for the PIAA playoffs when they won their second round games — an opportunity to play two state playoff squads before they prepare for their final postseason runs.

“We said these are not just games,” Methacton coach Craig Kaminski said of his team’s approach coming in. “We wanted to end as the five seed … Unfortunately that’s not going to work out that way, but we talked about these are state games and these are teams we could see in the second round depending on how you finish 6, 7, 8 … We talked about this being extra basketball and getting ready for the state tournament.”

Funsten said once you get through District 1 you can compete with anybody. If a team is to make a deep run in the PIAA tournament, it’s likely that ‘anybody’ will consist of at least one more District 1 team.

If Methacton and CB East both make it out of their first round state playoff games, Saturday’s district playback would be a preview of their second round matchup.

“It’s obviously helpful because if we’re playing the best teams, and we see the best competition then there’s no big surprises (when we get to states),” said Methacton sophomore Nicole Timko, who had 18 points Wednesday.

“These games are definitely ways to get better,” she added. “We were a little bit sluggish, so in practice we can pick it up and not make stupid mistakes on the court.” Wednesday’s game was playoff-like, featuring a very high-level of basketball with both teams playing much better than they did in the quarterfinal round.

After storming back in the game with a 9-0 run to close the third, Methacton went into the fourth quarter with a 38-36 lead. UD jumped back in front before the Warriors went ahead 42-41 with a Caroline Pellicano jumper midway through the fourth.

Cardinals’ junior Dayna Balasa, who finished with 18 points, tied the score with one of her four triples, and Kara Grebe’s layup put the Cardinals ahead 46-44 with under two minutes to play before UD survived two potential game-tying possessions from Methacton in the final seconds to close the game.

“We treated this game tonight as if it were the district semifinal game,” Funsten said. “We wish we were playing in the district semis. We’re not but we treated it like it. Our mindset is to treat every game the same regardless of the ramifications.

“We knew win or lose tonight you’re still playing in the state tournament but we treat every game like a championship game.”

The Cardinals will host North Penn in the fifth-place game on Friday night, while the Warriors host Central Bucks East in the seventh-place game at 1 p.m. on Saturday.

Kaminski said he would like to get back on the winning side of the things on Saturday and steer a historic season back in the right direction before states begin.

Funsten was excited about his team’s offensive play Wednesday night after a rough showing in its district quarterfinal loss to Plymouth Whitemarsh. He would like to see a better effort on the defensive side of the ball Friday against North Penn.

After Methacton and Upper Dublin finish up their playback games this weekend, they will have about a week of practice to prepare for the opening round of the state tournament, which begins Friday, March 6.

Regardless of the outcome of either team’s final playback game, they know they’ll be well equipped for whatever faces them next.

“I think we do the same thing every year because we’ve kind of lost in the same spot every year. We just have to regroup,” said UD senior Jackie Vargas, who complemented Balasa with nine points Wednesday.

“When states comes, districts too, people start to care less about what they look like toward people and just want to win as a team,” she added. “That team and that heart, coming out with the will to win equals a W.”