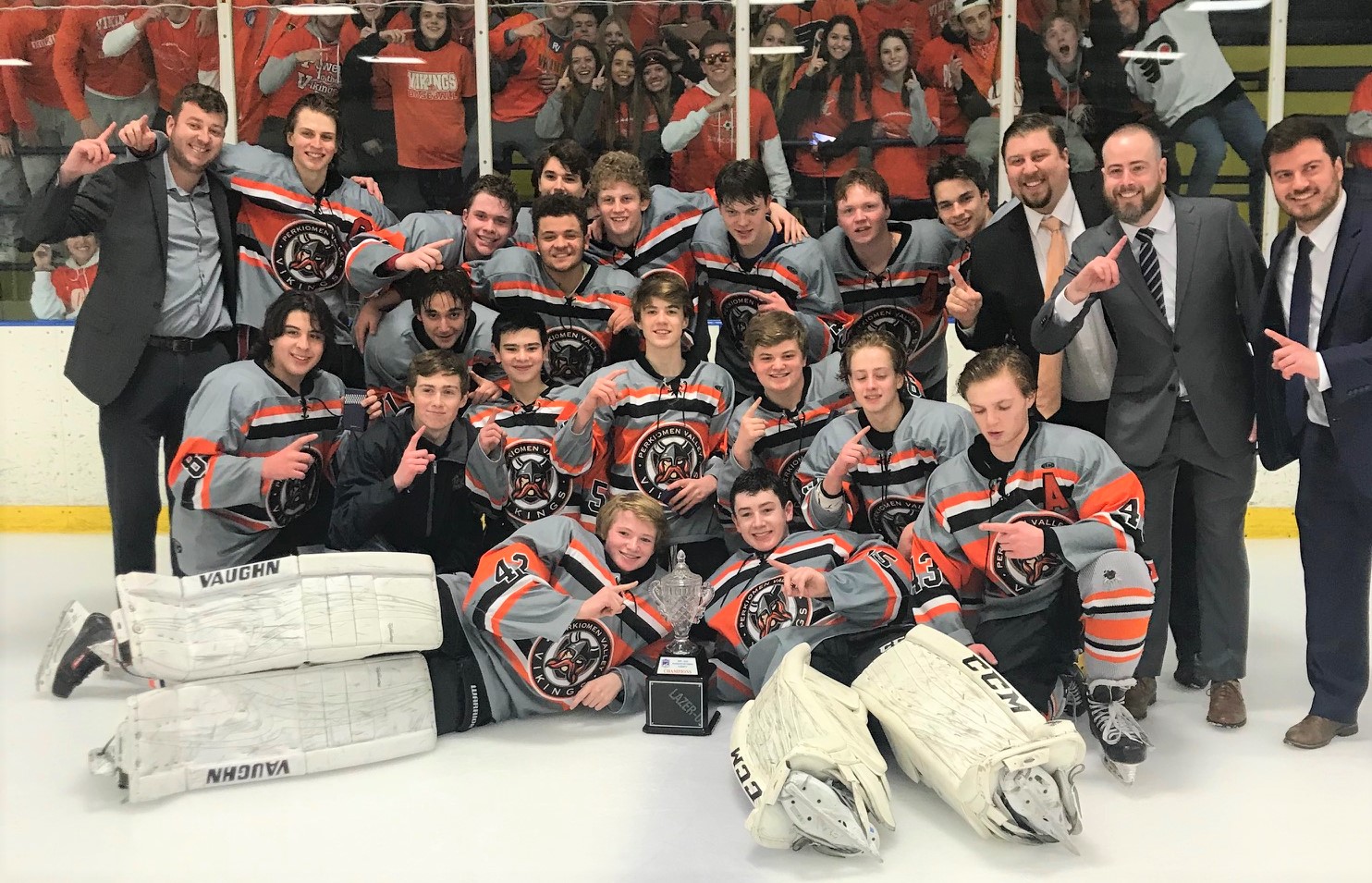 OAKS >> The proliferation of district and state tournaments have created some erosion of local rivalries in high school sports – the emphasis turning from winning a rivalry game or a league title to getting the best seeding for districts or qualifying for states.

But Wednesday night’s Pioneer Division ice hockey championship game at Oaks Center Ice was a throwback in more ways than one. On the ice, two heated rivals battled tooth-and-nail for a title while in the stands, a capacity crowd cheered, booed, and generally had their emotions sway with each play for a couple hours.

In the end, Perkiomen Valley junior Tristan Ryan’s goal with 8:53 to play broke a 3-3 tie as the Vikings edged Spring-Ford, 4-3, to win their first Pioneer Division ice hockey championship in nine years.

Adam Carter led the victors with two second-period goals to erase an early Spring-Ford lead before PAC leading scorer and PV captain Hunter Ringwood gave the Vikings their first lead with 5:44 to play in the second.

“We were down 2-0 the other night in the semifinals (against Owen J. Roberts),” Carter recalled, “so there was no doubt we were still in the game.”
Spring-Ford’s Brandon Burt knotted it up on the power play early in the third period, setting the stage for Ryan’s heroics.

“The shot hit off someone … might have been one of my teammates,” admitted Ryan after the game.

The junior wouldn’t let those technicalities damper his excitement.

“I don’t think I’ve scored a bigger goal in my life.”

Saxon Vargo scored Spring-Ford’s first two goals in the first period, while junior goalie Tyler Temoyan kept the Rams afloat with an eye-popping 46 saves — 39 of those coming in the first two periods.

The Rams end their season at 7-11-1. Coach Jim Ginnetti and his squad knew there’d be no Flyers Cup for Spring-Ford in 2020, so they were ready to lay it all on the line Wednesday.

“We don’t lose a single player (to graduation),” said Ginnetti, “and we have the guy who I consider the best goalie in the area. All heart. It was do-or-die tonight, and our kids really laid it on the line.”

The only problem was Perkiomen Valley matched the Rams’ intensity after a slow start. Their 16-2-0 start to this season afforded them a high seed in the Flyers Cup, which starts next week. But that wasn’t on anyone’s mind in the Vikings’ locker room Wednesday.

“In our huddle right before the game, I told the guys we’re not worrying about the Flyers Cup,” said captain and leading scorer Ringwood. “I wanted to win this championship against our rival, give that memory to our school.”

It may not have been Wednesday night’s emphasis, but the ride doesn’t stop here for the newly crowned Vikings, who will start play for the Flyers Cup next week as the No. 3 seed in the AA bracket. They’ll take on No. 14 Downingtown East on Tuesday night at Havertown Skatium.

A New Start >> Ice hockey doesn’t hold the long-standing tradition or level of participation as other sports in the Pioneer Athletic Conference.

Recognized as a club-level sport at Boyertown, Owen J. Roberts, Perkiomen Valley and Spring-Ford, ice hockey has undergone numerous structural changes within the ICSHL’s Pioneer Division in the past few years, with non-member schools incorporated into league play to create sufficient competition for full-member PAC schools.

Not only did Wednesday mark the Vikings’ first Pioneer crown since 2011, this season marked the first time this generation of players were able to play in a conference consisting only of member schools — albeit only the four previously mentioned.

In recent years, schools such as St. Joseph’s Prep have competed within the Pioneer Division, or teams from the league have combined forces (OJR and Phoenixville combined to form a team that won the league title in 2018) to field a squad.

“The last time we won the title, our big rival was Methacton,” said PV coach Brennan McCourt, a member of the 2011 championship squad. “I’d love to see the league get back to that, the more schools we have involved, the better.”

In recent years, Pioneer Division teams have qualified for the Flyers Cup as lower seeds and, for the most part, enjoyed relatively short stays in the tournament. The senior-laden Vikings have the record and the experience to be the team to break that trend.

“But no matter what happens, after tonight this season is 100 percent a success,” said Ringwood.

Notes >> Chris Cowgill turned away 28 Spring-Ford shots in a championship-winning effort in the nets for Perkiomen Valley. Ringwood’s co-captain, Michael Waters, was the backbone of a PV defense that limited Spring-Ford to only 18 shots in the first two periods.
Each team scored a short-handed goal, Vargo giving the Rams a 2-0 lead on a breakaway late in the first period. Adam Carter would be the first to solve Temoyan after the Spring-Ford junior started the game with 26 straight saves, and the PV forward added his won shorthanded tally five minutes later to knot the contest.
Spring-Ford’s Burt scored the only power play goal of the contest.
The Spring-Ford/Perkiomen Valley ice hockey rivalry is notorious for chippy play, but the two sides combined for only 12 penalty minutes on six minor infractions on Wednesday night.
Shots on goal finished 50-31 in favor of Perkiomen Valley.