Springfield finally conquers Mount to get to district final 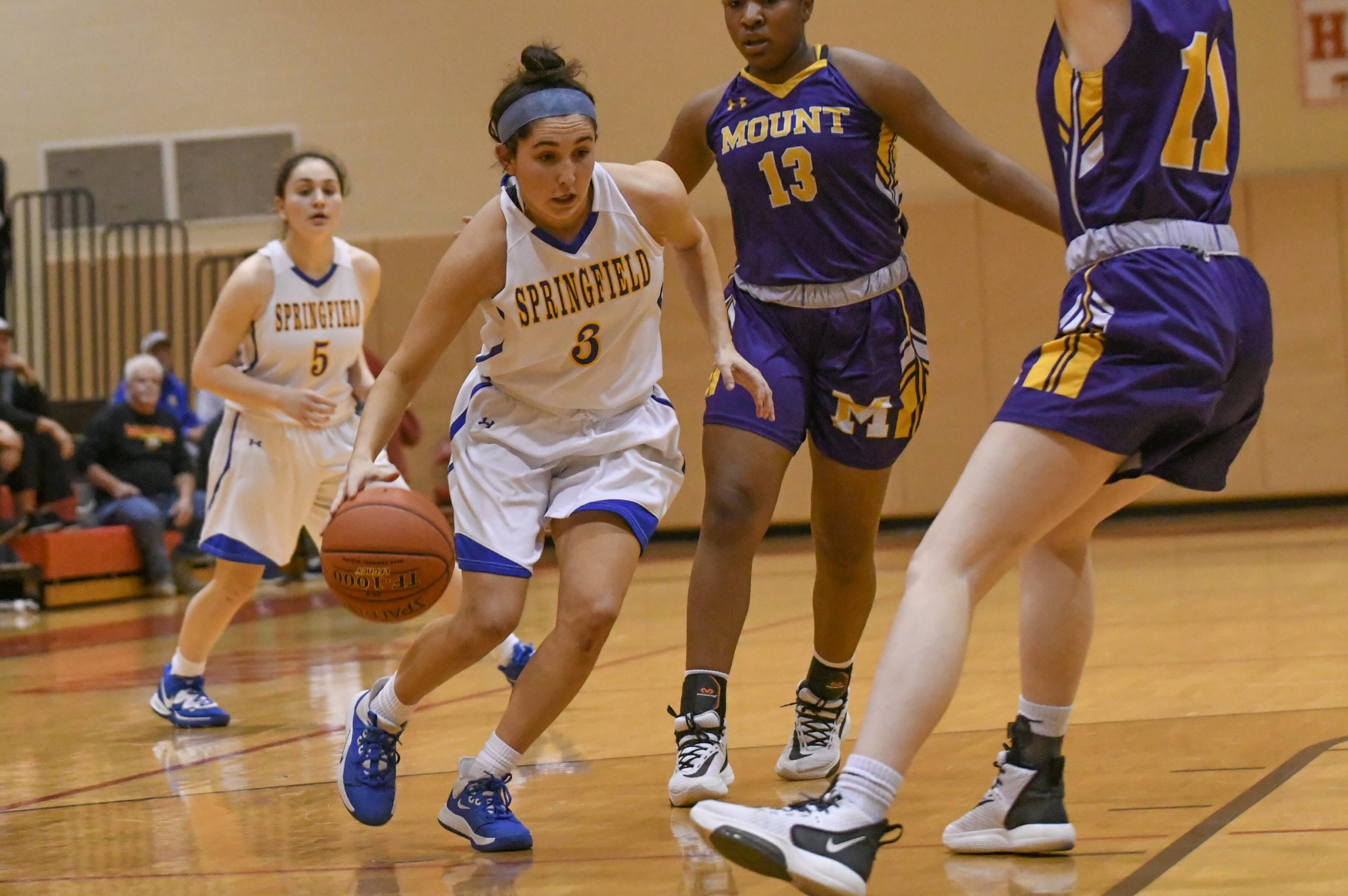 Springfield guard Alyssa Long drives past a pair of Mount St. Joseph's defenders Tuesday night. Long had nine points and five steals in a 52-42 win for the Cougars in the District 1 Class 5A semifinals. (Mikey Reeves/For MediaNews Group)

LOWER MERION — Springfield never forgot what it was like to lose to Mount St. Joseph in the District 1 Class 5A tournament.

Excuse the Cougars for holding a grudge.

“The last two years they bounced us out of the playoffs,” senior point guard Alyssa Long said. “It was nice to get them back.”

When Long and the other Springfield seniors were freshmen, they defeated Mount St. Joseph at Villanova University for the District 1 championship. It was the first district championship in Springfield girls basketball history.

But that was so long ago.

All that matters now is that the 2019-20 Cougars are about to play for another district championship. They will do so after conquering the Mount, 52-42, in the semifinals Tuesday night at Harriton. “For the underclassmen, they have never beaten Mount, they have always been knocked out by them,” said Long, who produced nine points and five steals. “We really wanted to change that story and we didn’t want to get knocked out by them again. We came, we were ready to go in the locker room, and I think getting out to a quick start told us that we’re a new team this year … and it was going to be a different story.”

The Cougars narrated a fascinating story, one that had action and drama. Springfield led 11-2 out of the gates. Junior guard Rachel Conran was excellent, making shots when other Cougars were cold. Conran went 7 for 14 from the field for 16 points. She drilled big shots when Springfield’s leading scorer, Alexa Abbonizio, had a tough time getting hers to fall.

“Someone needs to step up,” Conran said. “Alexa has been great for us all year, obviously, and she struggled in the first half, but we knew someone had to step up. Maybe today it was me, but tomorrow it will be someone else. That’s the kind of team we are.”

The Cougars (22-5) have ably responded from their disappointing loss to Ridley in the Central League final two weeks ago.

“Especially after the Ridley game, we were frustrated, but we knew we had another team. We want to win districts and states now,” Conran said.

For Springfield to get to Saturday’s championship game, it needed to keep Mount senior Grace Niekelski from completely owning the game.

While Niekelski started to heat up in the second half and kept Mount from collapsing, the Cougars made her work for her game-high 20 points. The gritty Johnston was responsible for shadowing Niekelski most of the way.

“She’s a really good player, she’s so fast. I was running up and down the court with her,” Johnston said. “I think just keeping her in front of me was the best thing to do and keeping up with her.”

Niekelski netted eight points in each of the final two quarters. She had a string of three straight field goals, including a 3-pointer, to cut Springfield’s 10-point lead at the start of the fourth quarter to three.

“Grace is such a well-respected player. I know her through Comets basketball and I know what she is capable of,” Springfield coach Ky McNichol said. “We knew that in order to win the basketball game, we had to stop Grace tonight. I thought Carli did an impressive job, not letting her touch the ball and score. I mean, she’s going to make some plays and she’s going to make her shots, but I thought Carli really worked hard on the defensive end and really took pride in locking her down.”

After Long hit a free throw to make it 40-36, Taylor Sistrunk made a trey to get Mount within a point. Springfield had an answer. Abbonizio, who was on the receiving end of hard, physical contact the entire night, made a layup to push the Springfield lead back to three points.

“It’s a game of runs. We’re going to score a bunch and they’re going to answer right back,” Conran said. “We didn’t expect them to just sit in the same defense … and we came into the game today prepared for whatever they were going to throw at us.”

Springfield’s defense took over in the final leg. Tough, physical defense is one of the hallmarks of McNichol’s teams and the players answered the bell. In the fourth quarter the Cougars forced six Mount turnovers.

Long had a pair of steals and Johnston came away with one in the final two minutes. With Springfield in the double bonus relatively early in the second half, Mount had no other option but to foul the Cougars.

Abbonizio, Long, Johnson and Jordan Postiglione all made clutch free throws down the stretch. Springfield went 11 of 14 from the charity stripe in the fourth quarter to seal the victory.

Abbonizio led the Cougars with 17 points. While she never hit her stride from the field, she was a brilliant 10-for-10 at the foul line. Johnston added six points and a team-high six rebounds.

“This is what we have worked for all year,” Conran said. “It’s exciting to have the chance to play for a district title.”