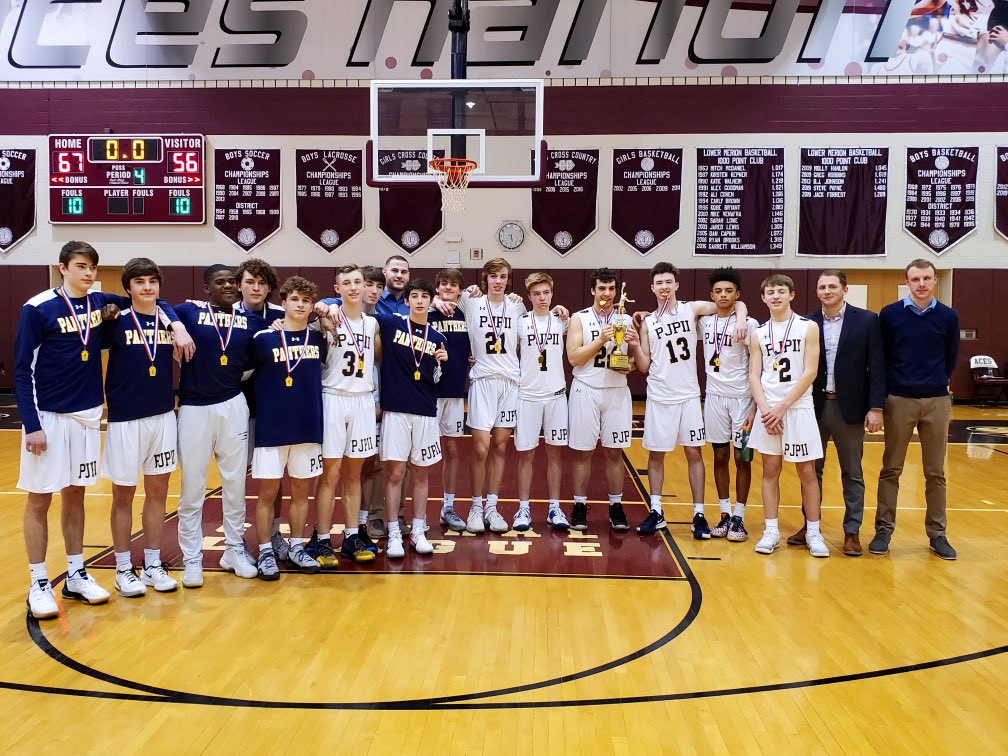 ARDMORE >> Pope John Paul II started out red-hot on Saturday afternoon and rode its early advantage to a 67-56 win over Lower Moreland and the first boys basketball district championship in school history.

Luke McCarthy scored 17 and Justin Green had 16 points and 13 rebounds for the Golden Panthers (19-6) in the contest at Lower Merion’s Bryant Gymnasium, earning top-seeded PJP the only berth from District 1-4A in the PIAA Tournament.

Jaden Workman added 14 points and five assists for the winners, who jumped to a 23-9 lead by the end of the first quarter and then held off numerous comeback attempts by Lower Moreland. Jack Doneker scored 18 and John Przybylinski 16 for the young second-seeded Lions (11-14), who defeated Pope John Paul 49-48 in last year’s final.

“It feels great,” said McCarthy. “It’s always been one of our goals. I just love playing with these guys.”

“It’s amazing,” added Green. “At the beginning and the end, we played the best. After the fast start, we lost some energy.”

The Golden Panthers shot 7-for-8 from the floor, including 4-for-5 from 3-point range, in the opening four minutes while opening up a 19-7 advantage and finished up the first quarter at 8-for-12 from the field while forcing seven Lion turnovers.

“We haven’t played since the Methacton game,” said PJP coach Brendan Stanton, in reference to the Pioneer Athletic Conference playoff final on Feb. 11. “We had a great week of practice. The kids were making shots in practice. They were ready for practice to end. They came out on fire. They were resilient and fought them off.”

Green hit three straight shots for eight points in the opening period and also had a pair of blocks and two steals in the early going.

“Justin is a little bit of a jack of all trades,” said Stanton. “We told Justin it’s your game if you want to go get them. He played an unbelievable game, especially on the glass.”

Doneker was also hot at the outset, making his first five shots on the way to 15 points in the first half.  His two free throws topped off an eight-point Lion run at the beginning of the second quarter that cut the lead to 23-17. But Drew McKeon (9 points, 7 rebounds) knocked down a 3-pointer from the top of the circle to start a run of eight straight points for PJP, which went into the half with a 36-27 lead.

“Basketball is a game of runs and we just handled their runs,” said Green. “They’re going to have their runs and we had to respond to that.”

Then Lower Moreland closed to within 38-32 when Przybylinski drilled a 3-pointer from the right corner 2:20 into the second half. But Pope John Paul scored nine straight and led by at least nine the rest of the way.”

Doneker was held to 1-for-6 shooting in the second half by McCarthy.

“I knew he was pretty good in the first half,” said McCarthy. “I kind of took it personally.”

Pope John Paul eventually cooled off to 45 percent from the field for the game and Lower Moreland finished with a 35-34 rebounding edge, including nine boards by Joe Morozin.

But the early PJP advantage was too much to overcome for the Lions, who graduated 13 players from last year’s title team.

“Tough job,” said Lower Moreland coach Seth Baron. “They’re a strong team. They weathered our push-backs. I would have liked to have gotten a few more of those 50-50 balls. They have some talented kids. But I could not be prouder of the fight from our kids.”

PJP will open state play on March 6 against the fourth-place team from District 12, much preferable to  going home after losing the district final by a point last season.

“It means a lot to Drew McKeon and our four seniors,” said Stanton. “It’s awesome. A lot of these guys have sacrificed for our younger guys. I think it means a lot to our players.”

“We definitely didn’t want it to end here,” said Green. “We want to get to states and make a run.”