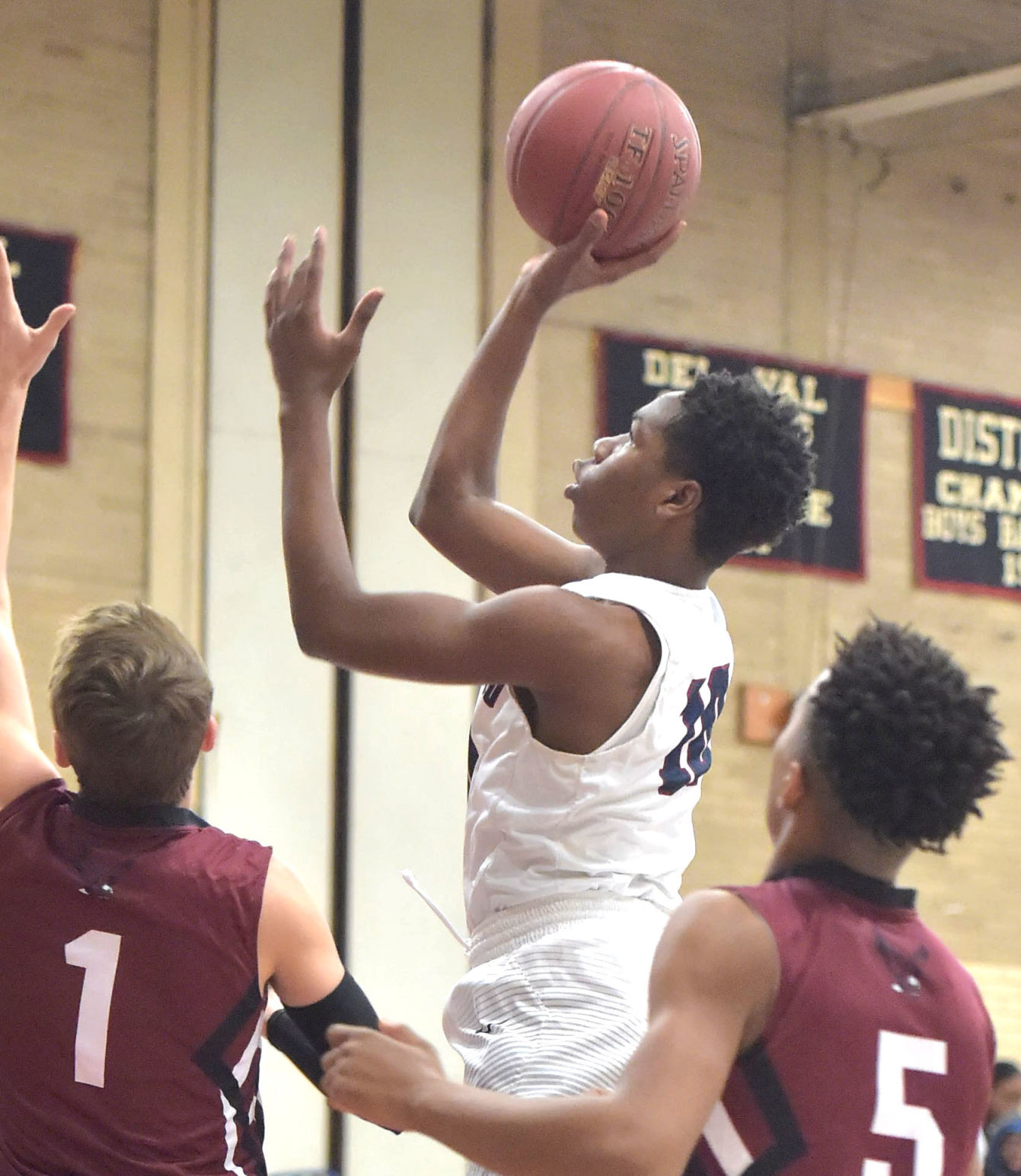 Penn Wood's Jerry Flynn, shown here in a game against Chichester earlier this season, scored 16 points, including a pair of crucial buckets late, to help the Patriots get past neighboring Academy Park in a District 1 Class 5A playoff game Wednesday night. (Pete Bannan/MediaNews Group)

LANSDOWNE — You can call it a District 1 game. You can add whatever classification you want. But make no mistake, what transpired between Academy Park and Penn Wood Wednesday night was first and foremost Del Val basketball.

Twice this season the teams had met, the home team winning by two each time. And through 33 turnovers, 30 fouls and dozens more hard but clean plays in the rubber match, there emerged just enough shot-making to lead the No. 7 Patriots to a 46-38 win over the Knights in the first round of the District 1 Class 5A tournament.

It’s only fitting, given the hard-nosed nature of things, that the game’s leading scorer entered halftime with just three shot attempts. Jerry Flynn came out for the third quarter not just sporting a new jersey – No. 25, after a cut on his right arm had blood-stained his usual No. 10 – but with a renewed commitment to get involved on offense.

Jerry Flynn cleans up the mess. Penn Wood up 6 pic.twitter.com/gENR4p6h3N

Flynn hit all three of those attempts in the first half to stake Penn Wood to a three-point lead. But after the break, he asserted himself on more than just the offensive glass.

He finished with 16 points, including two crucial buckets in the fourth to stem the tide of an Academy Park run that got within two. It fit the grueling nature of proceedings that so much of Flynn’s offense was generated off his 18 rebounds, the most willing of the bunch to muck it up under the basket.

“They knew he was our best rebounder and scorer, so they would have multiple people boxing him out,” forward Des Johnson said. “They would collapse on me and Jerry in the post. So we just had to execute in the second half.”

Flynn scored six points in the third, one on a pinpoint feed from Johnson on a back cut that was part of a decisive 12-0 run.

“It was an easy back cut,” Flynn said. “Des got the ball, I back-cut. We have great chemistry. Me and Des try to play through us and find the rest of our teammates.”

Flynn’s offense helped mitigate a 45-34 disadvantage on the boards. So did Academy Park’s ghastly shooting night. While the 10th-seeded Knights (14-9) slowed the pace early and created favorable looks, they didn’t hit many.

“We have to play through rhythm,” Cassidy said. “That’s what it’s about. And then it’s all mental, too.”

The execution hit its nadir in the third, with AP rooted to 26 points for more than eight minutes. It didn’t get its first points of the fourth until a Northern putback with 4:53 to play.

Nate Bundy gets AP within 2. pic.twitter.com/9BX0fYtACW

But this being Del Val hoops, AP had a run left. A Northern bucket trimmed the deficit to two, and after two Shamir Baynes free throws, Nate Bundy’s free throw narrowed it back to two with three minutes to play.

But Baynes (15 points) scored in transition, then Flynn cleaned up two straight misses to set the final margin.

The win sets up a district quarterfinal battle Saturday at Holy Ghost Prep, the No. 2 seed that survived an upset bid by No. 15 Marple Newtown 41-40, with a states berth on the line. It also marks two straight years that Penn Wood (14-8) has ended AP’s season.

In the Del Val, that carries extra meaning.

“This one hit hard,” Cassidy said. “Knowing that we lost to them last time and coming back, I thought we were very mentally prepared, very physically prepared. But it’s going to hurt hard.”

“They’re right around the corner,” Johnson said. “It’s fun playing them. It’s higher energy. There’s a lot of talking. But at the end of the day, whoever wins gets to talk.”

Radnor puts memories, Upper Moreland behind in Class 5A victory
Methacton battles by Souderton into District 1-6A quarterfinals