Shorthanded Penncrest steps up to shut down Chichester 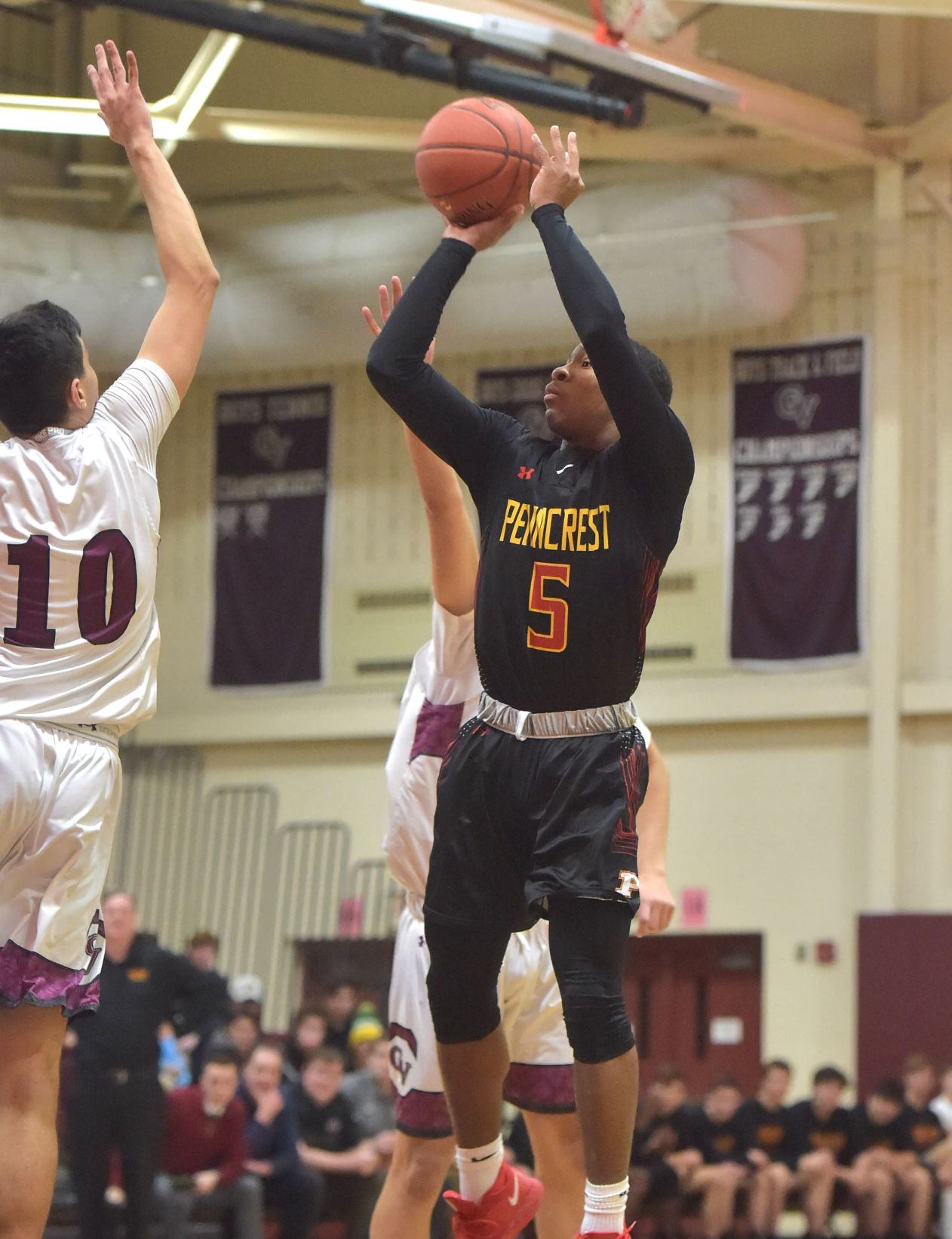 Penncrest's Marquis Tomlin helped the Lions advance to the second round of the District 1 Class 5A tournament.

MIDDLETOWN — Penncrest was favored to defeat Chichester in the first round of District 1 Class 5A playoffs Wednesday.

After all, the Lions were seeded third, the Eagles 14th. Nobody expected a 57-23 beatdown that looked worse than the math.

Certainly not with the Lions missing point guard Saahir Lee, out with an injury. High school starting lineups can be fragile.

The Lions (20-6) didn’t miss a beat as they turned to Marquis Tomlin to do much of the ball-handling and Aidan Carroll to make Chi’s leading scorer, Josh Hankins, wish somebody else was guarding him.

“Hankins was one of the leading scorers in the county,” Lions coach Mike Doyle said. “And Carroll just gave up himself to play him. Carroll’s a shooter and we asked him just to run around and chase (Hankins) the entire game. And it really stymied them. They had no one else to go to.

“Hankins is their facilitator, he’s their engine. When he has it going on, he’s getting everyone else involved. He couldn’t’ get the ball and nobody else was involved. That was a key.”

The Lions take on Strath Haven, the sixth seed that beat Phoenixville in the first round, Saturday in the next round at Kaufman Gymnasium. They’ve played three times, the Lions losing once, on a buzzer-beater at home. Better get there early for the preferred seating.

But back to the Lions, one of the fortunate teams in Delco to have experienced depth at guard to weather an injury on the way to a fourth straight 20-win season.

Tomlin pushed the ball up the court from the opening tap, finishing with 11 points and four assists. He got six points at the free throw line, the price he played for taking on the Eagles’ bigs.

“I knew I had to step up in a bigger role,” said Tomlin, who contributed four assists. “They were talking a lot. They were face-guarding me. But I was seeing right through that. That’s fine with me. We’re really clicking right now. We’re all coming together. And we may have Saahir coming back on Saturday against Strath Haven.”

Carroll nailed three 3-pointers, dished five assists and handled just about every inbounds pass the Lions had. He and Tomlin have been playing together so long it’s like they have one set of eyes.

Typically, Tomlin does the bulk of the work on the opposition’s leading scorer. After this game, he may lose that job.

The Eagles didn’t score their first points of the second half until Hankins made two free throws in the last two minutes of the third quarter, the Lions leading 38-10. It was such a prolific drought the Penncrest student section very loudly cheered those makes, the easiest of the evening for Hankins.

“I was just trying to take all his shots away,” Carroll said. “Coach said he had the green light from wherever he was on the court. So, I had to get into his face and try to make him shoot shots he didn’t want to take. He got his points tonight but our whole team did a great defensive job on him.”

Almost lost in the rout was the way the Lions took away the sideline break play the Eagles run with Hankins following free throws by the opposition.

Hankins lines up behind the foul shooter and breaks after a missed shot. Carroll was squarely in front of him, almost face-guarding him while the Lions took their free throws. There was nowhere to go.

“Every game they scored on that,” Tomlin said. “Every game.”

Just not in this game.

The Eagles (10-13), who are in a rebuilding mode under coach Clyde Jones, aren’t going to watch the replay.

“Penncrest is so disciplined defensively and we’re a team with one primary scorer,” Jones said. “And tonight, we didn’t share the ball, we didn’t screen well and we didn’t play well offensively. And Penncrest had a lot to do with it. We’re not the kind of team that climb out of holes because we don’t have a prolific scorer. We’ve got kids that are developing.”

Jones can take solace in the fact that he hopes to return many of his players, including Hankins, who has a soft touch, can drive to the basket and make threes.

“It’s good for them to get to this moment and experience it,” Jones said. “After having a total rebuild last year, we made it. It wasn’t a good showing here but the opportunity for my kids to experience playoff basketball and then know what they’re going to need to go to the next round is the only positive I can pull out of tonight.”