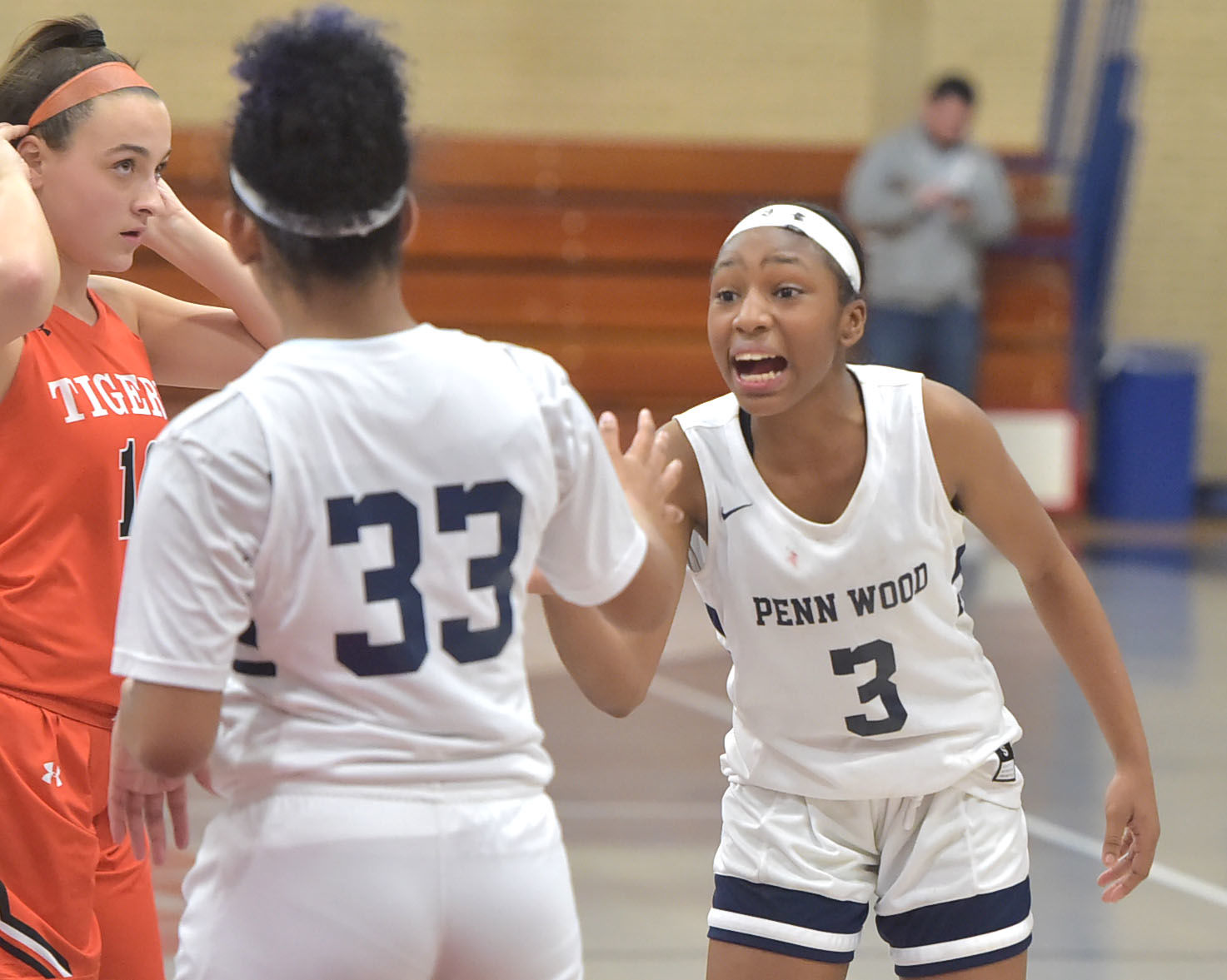 LANSDOWNE >> There was a smidge of blood on the right shoulder strap of Ashley Cyrus’ game jersey. Penn Wood teammate Jada Hutt held a bag of ice near her rib cage.

Everybody that played in Tuesday’s District 1 Class 5A opener had something to remind them of what they had just gone through in Penn Wood’s little gym.

“Sorry that it took so long,” Cyrus said, jokingly.

The Patriots play No. 10 Radnor in a second-round game Friday night.

Marple Newtown’s Haley Levy, left, and Penn Wood’s Jada Hutt go for a loose ball in the second half Tuesday night in a marathon district playoff game between the teams. (Pete Bannan/MediaNews Group)

If you stayed around for all three hours Tuesday, congratulations, you witnessed a classic. Hutt and Cyrus were amazing, especially after regulation. Hutt scored 19 of her 29 points in the extra sessions. She made three buckets in the sixth OT to help the Patriots finally pull away from the Tigers.

“We had to do whatever we could to win,” said Hutt, who finished with 29 points, 20 rebounds, five steals and five blocks. “We didn’t give up.”

Neither did the Tigers, who showed they were no ordinary No. 15 seed.

“We really played our hearts out, I’ve never seen us play like that before,” said Haley Levy, who was incredible for the Tigers. The sophomore poured in a career-high 34 points to go with 10 rebounds.

“We left it all out there.”

The Del Val League champion Patriots overcame a six-point deficit in the fourth quarter. Hutt drove the lane and scored to make it 37-all.

Xenia Gillis, the Patriots’ solid freshman forward, had four points and two blocks down the stretch to get PW into overtime.

“Everyone stepped up,” PW guard Racquel Curry said. “It wasn’t just one person. Our bench, too. We needed everybody to win this.”

Marple fell behind in every OT period, but found a way to claw back. While Levy was the superstar, Emily Reynolds banked a long deuce at the end of the first OT to tie the game.

At the end of the third and fourth overtime sessions, it was freshman Brooke Impriano who rose to the occasion. Impriano drilled a 3-pointer at the end of each four-minute period to even things up.

Freshman guard Mary O’Brien showed a maturity beyond her years. She ran the point very well and tossed in seven points.

“You’re going to hear a lot about Brooke over these next three years and our other young kids,” MN coach Ryan Wolski said. “It has been a crazy season. We had a senior miss nine months with an ACL. We had Haley Levy, our best scorer, miss a few games. Brooke battled some injuries all year, and we put a lot of pressure on our freshman point guard (Mary O’Brien). They never complained and they kept playing. Obviously this isn’t the way we wanted our season to end.”

Penn Wood went ahead by 10 points in the sixth OT. Hutt led the charge with nine points and four boards.

The teams combined for 54 turnovers and 49 fouls.