Easterns Swimming: Octaviano #2Strong for the pain in silver-medal swim 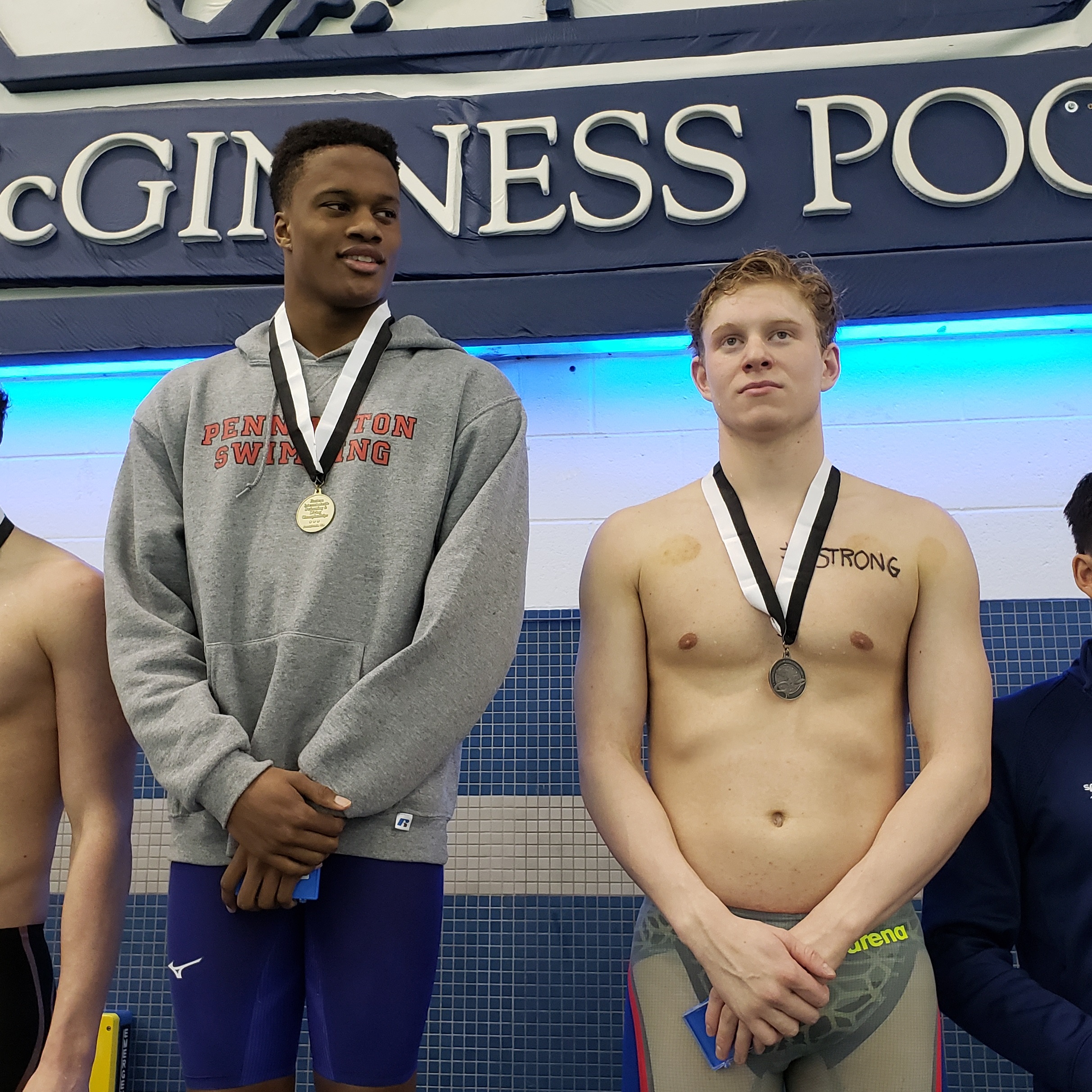 Haverford School's Brian Brennan, right, sporting #2STRONG written on his chest, poses with his silver medal in the 100 free at Easterns Saturday. At left is 100 free champion David Curtiss of Pennington School.

LANCASTER — Antonio Octaviano was favoring his arm as he stepped to the block Saturday night.

The rotator cuff in his left shoulder was worse for wear after Friday’s 100 butterfly at the Eastern Interscholastic Championships, the Haverford School senior falling to eighth in the finals. But as soon as he heard his name announced at Franklin & Marshall and the pink-clad Fords at the other end of the pool turned up the volume, Octaviano struck a pose, then put together a stellar race.

Haverford School’s Antonio Octaviano stands on the podium with his silver medal in the 100 breaststroke Saturday at Easterns. Octaviano clocked in at 55.28 seconds.

Octaviano finished second in the 100 breaststroke in 55.28 seconds, just .09 behind Andrew Benson of Phillips Exeter Academy.

What drove him through the pain is the same thing that drove him into the front row of the Haverford student section eight days ago to support his friend Jack Cloran in his battle with cancer. The Fords added No. 2 Cloran jerseys to their usually flamboyant Easterns ensemble this year, with swimmers tattooing #2Strong across their chests.

“The only thing that was driving me was the boys,” Octaviano said. “I love the boys. That was the only thing driving me the whole race. They’re on the other side and just there for me.”

The final boost for Octaviano, a Minnesota commit, was a chant of “Jackybama,” Cloran’s nickname, before he stepped up to the block. The reigning champ in the event blasted his first 50 to take the lead. In the final 50, only sheer luck stopped him: He ended up between strokes at the wall, where Benson kept his momentum to finish strong and win in 55.17.

After finishing sixth last year, the Fords coasted to third place Saturday. Their 448 points fell behind Phillips Andover (641) and Mercersburg (485.5). But they finished best of the Inter-Ac, ahead of EA in fourth, Germantown Academy in sixth and Malvern Prep in seventh.

Brian Brennan finished second in the 100 free, his time of 44.40 slipped late behind Pennington School’s David Curtiss. Bobby Blewett blasted the C final of that event, winning in 46.40, which would’ve bested the B final, too.

Jack Deppen was fifth in the 500 and Anton Crescente took eighth in the 100 back. The squad of Deppen, Blewett, Crescente and Brennan finished fourth in the 400 free relay.

“That’s the beauty of it,” Octaviano said. “Last year we got seventh, and this year we got third. Just seeing the progressing and just being with them for all the practices … all the hard work they put in, I knew it would pay off.”

Matching two of your best swimmers in an event might not be typical. But the way Madison Kolessar and Mia Abruzzo handled it, the logic seemed clear.

Notre Dame’s Madison Kolessar, right, and Mia Abruzzo chat on the top two steps of the Easterns podium for the 500 freestyle Saturday. Abruzzo won the event in a Delco-record 4:46.89, with Kolessar second in 4:50.35.

“It’s easier just for support and stuff,” Abruzzo said. “In the ready area, we were hugging each other. It was really emotional because it was her last individual race for Notre Dame. I like having a teammate in the same meet.”

It wasn’t the only Delco record for Notre Dame, with Ashley Kolessar finishing second to Penn Charter’s Sally Foley in the 100 breast. But her time of 1:03.62 undercut the time set by Ridley’s Gab Rudy in 2017.

The squad finished second in the 400 free relay, with the Kolessars, Abruzzo and Natalie Stuart going 3:28.12.

“It’s amazing,” Abruzzo said. “I never thought we could build up this much. And I think next year we’re going to be even better.”