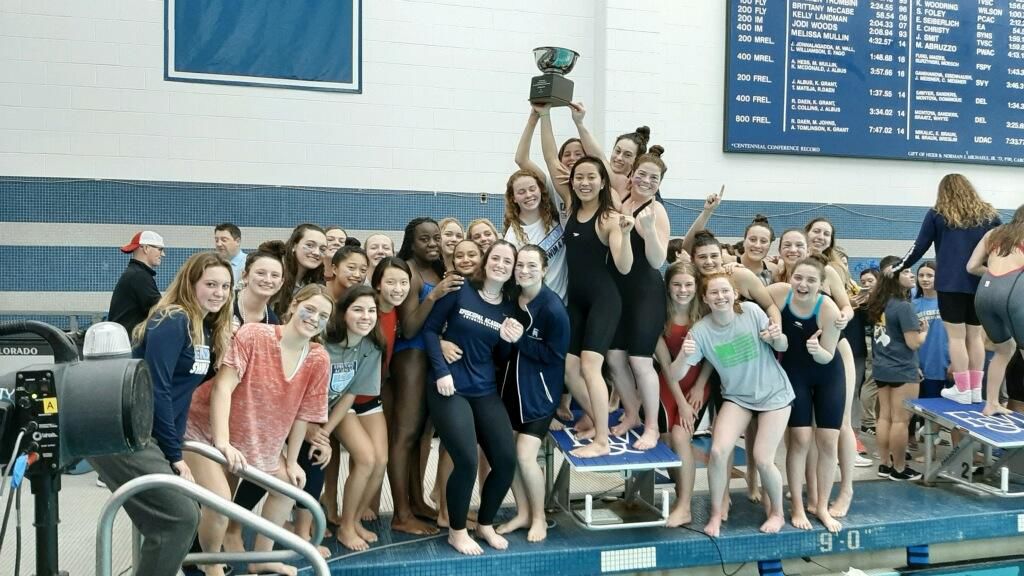 LANCASTER – Alex Towers didn’t know the exact numbers, but she knew the feeling.

As a freshman, she had been part of the Episcopal Academy team that won the girls championship at the Eastern Interscholastic Swimming and Diving Championships.

That year, the Churchwomen were led by three All-Delcos – Swimmer of the Year Alex Sumner, Emma Seiberlich and freshman Hadley DeBruyn – who combined to win five events, collecting points in chunks. That’s usually the path to team hardware.

But three years later, EA returned to the top step of the podium by drastically different means. The Churchwomen collected points from 19 swimmers and three divers en route to a team score of 619 and a second girls title.

Episcopal Academy’s Kelly Feuzeu Mekoue, left, and Bridget Egan pose with their medals in the 100 freestyle at Easterns Saturday. Mekoue won the event in 51.59 seconds, with Egan sixth in 53.41.

The win ends a two-year reign by Penn Charter, which finished second with 557. Third was Notre Dame with 457 in its highest finish.

Back in 2017, 11 swimmers and two divers scored. This time almost doubled the amount, an effort not only championship worthy but somehow rarer.

“Everyone put in everything they had, and the atmosphere made us go so fast,” Towers said. “… It’s insane. We all were cheering and it was an amazing experience.”

EA was one swimmer shy of maxing out its number of finalists Saturday, with each team limited to four entries per event. And if that wasn’t impressive enough, they did it with DeBruyn, the Penn commit out with a shoulder injury. DeBruyn scored 60 points, four shy of the max, as a freshman.

“Everyone was worried about it,” Towers said. “But I think we knew we had to step up because she wasn’t there. And I think we almost did it for her, too.”

One of the only swimmers to evince EA’s old ways was Kelly Feuzeu Mekoue, who completed the sprint double. She entered as the top seed in the 100 free and defended the spot with a commanding performance in 51.59 seconds.

EA grew its point total brick by brick. Two B finalists in the 500 free. Third place for Riley Pujadas in the 100 backstroke, with Emma Lunn and Mekhi Wilson in the B final. Alina Klaehn nicked a bonus point by winning the 100 breaststroke C final. Kat Harrar finished sixth in diving.

Across the board, swimmers improved their standing from the morning. It was capped by the 400 free relay (Liu, Lunn, Maisy Montgomery and Pujadas) finishing fourth, briefly jumping ahead of Phillips Andover in the combined team score.

The Churchmen couldn’t defend that title, with Andover’s boys winning the 400 free relay, downing a Bolles School record from 1991 in 2:59.81. The Churchmen foursome of Ben Wesley, Sam Wesley, Cole Whitsett and Jack Christian battled valiantly, Christian hitting the water even with 200 free champ Max Hunger, who legged out the win. EA’s 3:01.75 did set a Delco record, however.

“It’s just all adrenaline,” Christian said. “I’m just very excited to get in there and swim for the team.”

Liu wasn’t part of the title team as a freshman. It offers her a fresh perspective.