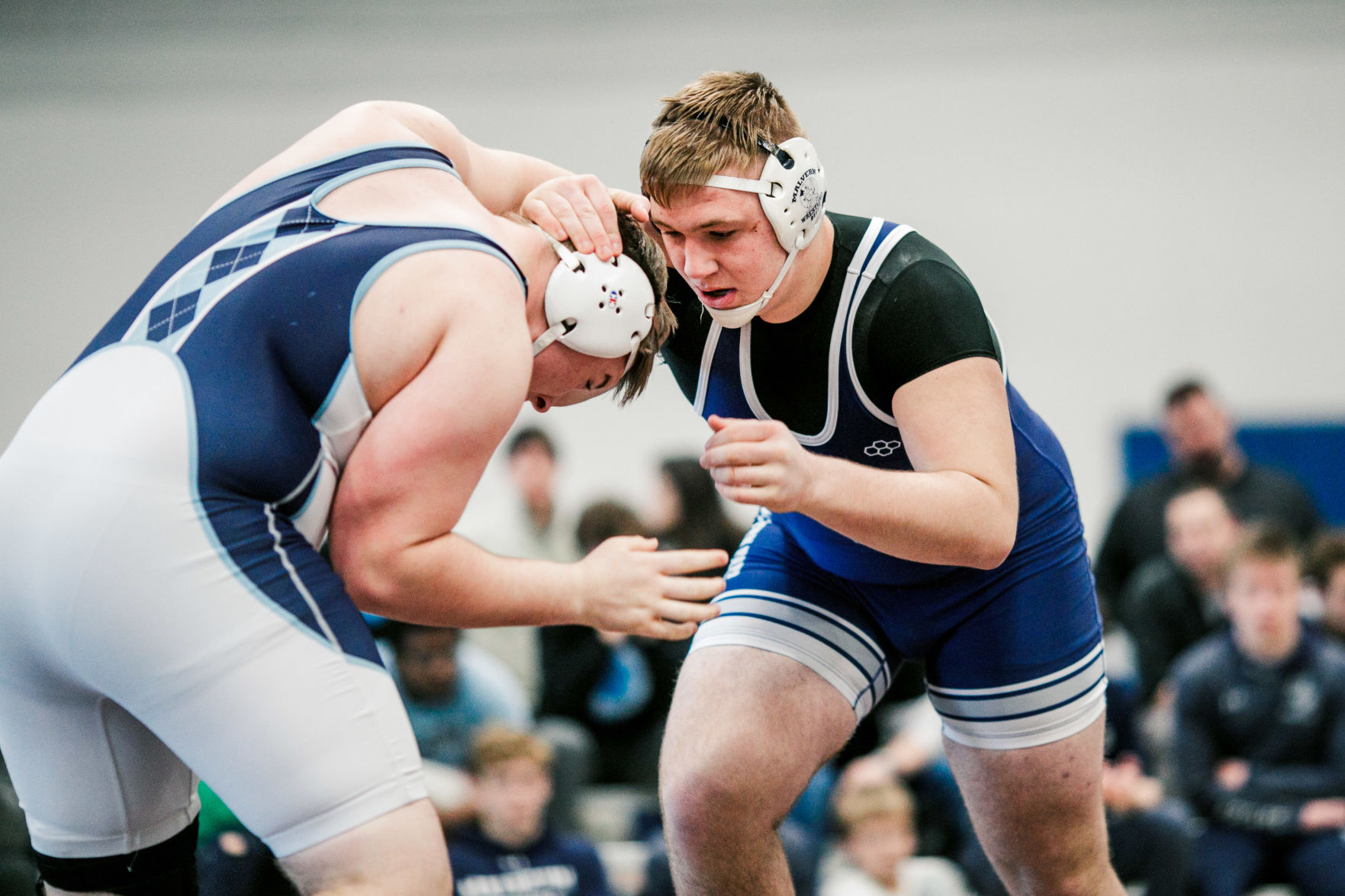 Malvern Prep's Coltin Deery, a transfer from Garnet Valley, sets up an attack against Wyoming Seminary's Nate Miller before pinning him in the 285-pound final of the Pennsylvania Independent Schools Wrestling Tournament at Westtown School. (Nate Heckenberger/For MediaNews Group)

WESTTOWN TWP. — It was only a year ago that Colt Deery and Billy Brosko were ramping up for the PIAA District 1 Class 3A wrestling tournament, the regions and the states.

Deery, then a sophomore, was throwing bodies around at 285 pounds for Garnet Valley while Brosko, a freshman, was making a name for himself at Marple Newtown. They’re both likely to return to states in Hershey this year … as cheerleaders, not competitors.

To say they wrestled with decisions to transfer to Malvern Prep and Haverford School, respectively, is an understatement. Once a teammate, always a teammate for kindred souls who built relationships with blood, sweat and sometimes tears. No regrets, it’s just that change is more difficult than you’d care to believe for teens, regardless of how much help they get from adults.

Deery did what he does best on the mat Saturday in the Pennsylvania Independent Schools Wrestling Tournament (PAISWT) at Westtown School, winning a gold medal by fall at 285 with three matches that didn’t make it out of the first period. He was 46-1 entering the tournament, the loss coming to a public school wrestler from Ohio that he previously defeated in the prestigious Iron Man tournament.

“Colt brought good leadership with him,” Friars coach Nate Lauter said. “He started wrestling with our Malvern Wrestling club when he was seven or eight years old. He did well at Garnet Valley. Obviously, they have a good program. They made the state duals. He came to us for both football and wrestling and he brought that very hard-nosed, tough mentality that he’s instilling on the younger kids – like right away. Right away, he fit in. The kids all gravitate toward him.”

Deery is ranked first in the latest National Prep rankings preceding the tournament that runs from Feb. 21-22 at Stabler Arena, Lehigh University. He finished eighth in the states last year for Garnet Valley.

Awaiting Deery, now a 6-3, 270-pound junior, is another big decision as several colleges are interested in bringing him in to play football. At last count he says there were six offers, from Yale, Brown, Cornell, Dartmouth, Coastal Carolina and the University of Akron.

“That all happened this week,” said Deery, a solid student and offensive lineman in the fall. “I have to keep focused on what I’m doing now. I’ll worry about that stuff later. But yeah, this is going to be a tough one.”

While it was no less difficult for Brosko to leave Marple Newtown after one year, it helped that he was familiar with some of his future teammates at The Haverford School.

“Me, my younger brother and another Marple kid came over at the same time, so that helped,” Brosko said. “I really clicked with the coaches. I miss my friends in school pretty much, but here it’s better for me. It was good to see what avenues there were for me. Right now, it’s just the National Preps and see what happens next.”

Brosko was third at 220 pounds in the PAISWT as he surrendered a 4-2 decision to Harrison Levans of Germantown Academy on a reversal in the third period. Levans was beaten in the gold medal match by Kolby Franklin of Wyoming Seminary, which had a finalist in every weight category and defeated Malvern, 349-294.5 in the team score.

Brosko entered this tournament with a 41-5 record. He also was sixth at 220 in the National Prep rankings. Last year Brosko was 20-9 for Marple, finishing fifth in the regions although not placing in states. He was the only freshman at states at 220 and just the fifth freshman in the competition at 220 or 285 since the current PIAA weight class format was instituted in 2012.

“Bill’s been great,” Fords coach Jesse Sataloff said. “He’s a big brother to all his teammates. He’s a role model that the kids look up to and want to be like. He’s incredibly supportive of the younger guys. He’s been a great leader for us and our team. He’s kind, caring and concerned, yet at the same time he’s willing to push them when he sees they’re not living up to their potential. He’ll tell them they’ve got to step up. He’s an athletic big kid who’s strong, who moves well, and he’s got solid fundamentals.

Instead of taking the bus to school, Deery and Brosko drive or carpool. If Deery needs a ride he knows he can call Malvern teammate Dayton DelViscio, the transfer from Penncrest who lives nearby.

DelViscio, a senior, captured gold at 120 pounds in the PAISWT with a win by fall, a technical fall and in the final a 10-7 decision over Gregor McNeil of Wyoming Seminary. DelViscio is comfortable with his decision to transfer a few years ago. He has a date ahead with the Naval Academy.

Brosko and Deery didn’t address any backlash stemming from their transfers. That’s refreshing, because it couldn’t have been easy on their teams at Garnet Valley or Marple Newtown. Of course, enrolling in the two Inter-Ac League affiliated schools essentially means they don’t compete against their old teams.

Deery was at the PIAA Class 3A dual meet tournament in Hershey last week cheering on the Jaguars, who became the first Delco team to reach that competition.

At the same time, there’s no denying, as Deery and Brosko indicated, the good times they had with the old rivalries. Fortunately, there was Inter-Ac football last fall. Deery, playing guard, lined up against Brosko, a pass rusher.

“He beat me most of the time,” Brosko said. “But I got by sometimes. It was fun messing around during the game. He was talking. He just kept saying, ‘I can’t beat him,’ and ‘I won’t get by him.’ It was fun.”

“No, never, never with Billy,” Deery said with a smile. “He said he got past me a couple times? Yeah, a couple times when there were screen passes and I let him go maybe.”

Time heals all wounds. For Deery and Brosko, there just isn’t enough time to keep looking back.