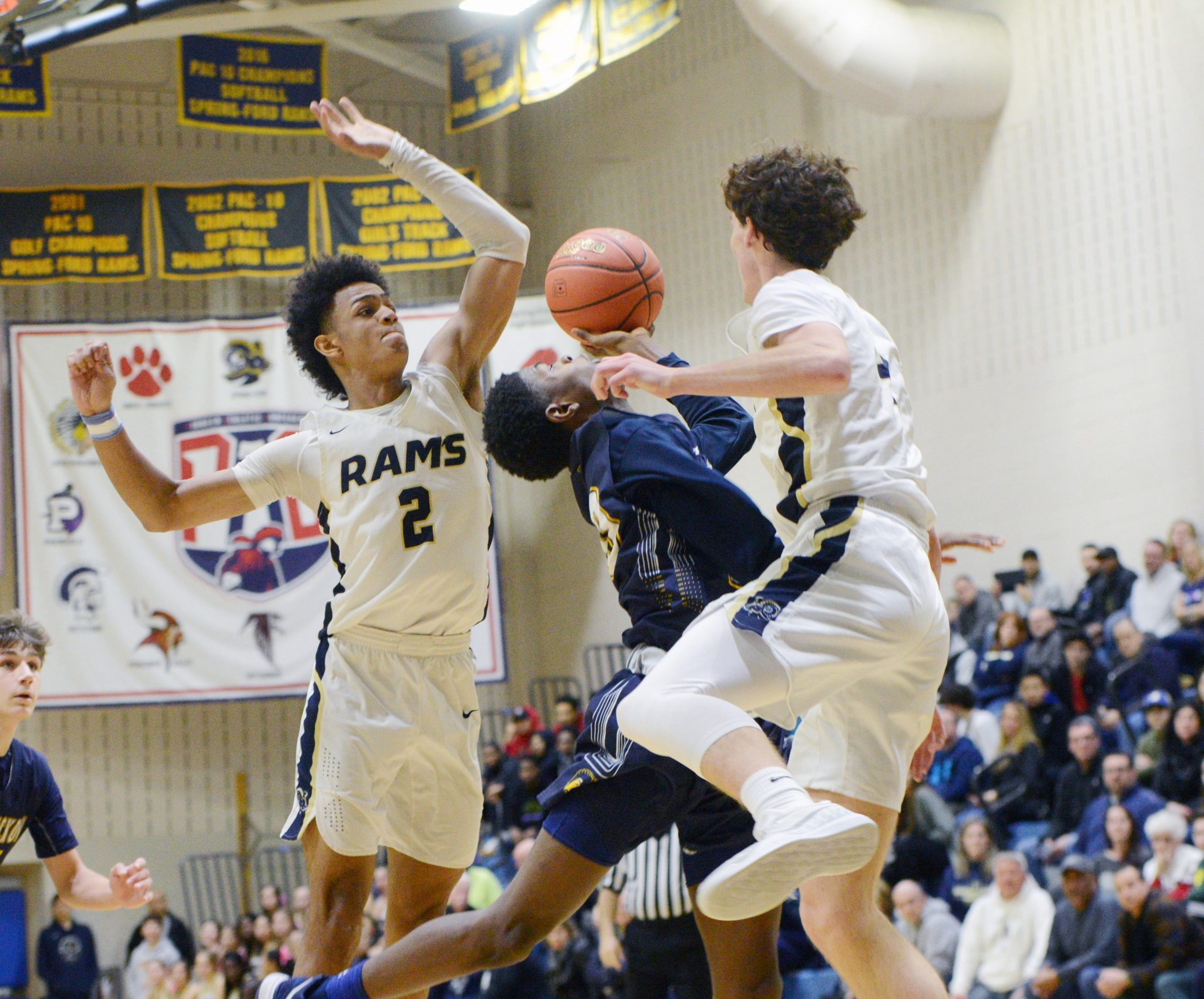 A nine-point deficit in the first quarter of the Rams’ District 1-6A playoff game against Wissahickon on Friday night was a quick reminder of that.

Spring-Ford will play at seventh-seeded Bensalem in the second round on Tuesday with a state playoff berth on the line.

“When I’m in the huddle and I look around and I see the other seniors and they look at me, it’s almost the last game for all of us,” Medearis said. “We’ve gotta play with that intensity … We reminded each other that it could possibly be our last game. We stepped it up big time.”

“It’s tough to watch a season end for a good group of kids,” Wissahickon coach Kyle Wilson said. “They worked hard. This week, we couldn’t ask more from them. They did what you asked to prepare for a playoff game when you go into enemy territory. It’s tough to end, but there’s so many things they can hang their hats on.”

Suddenly, Wissahickon had the ball trailing 58-56 with 4.5 seconds left. After an inbounds pass to senior Carmen Ostroski, Williams got the ball in the front court and let go a three for a chance to win. Spring-Ford sophomore Jake Kressley did enough to contest the shot and force a miss.

Medearis missed out on Spring-Ford’s postseason run last season with an ankle injury. He scored a career-high 24 points in his playoff debut against Upper Merion in the PAC Final Six on Feb. 5 before being held to seven points in a 61-31 semifinal loss to Pope John Paul II two days later.

The senior forward scored 11 points in the second quarter Friday to give the Rams a 33-30 lead at halftime and then scored six in the final quarter, making consecutive baskets to put the Rams ahead 54-50 with less than three minutes left.

“I just really didn’t want it to be my last game,” Medearis said. “Especially last game we got blown out by 30. I couldn’t let my legacy be losing by 30 to PJP.”

Kovaleski followed Medearis’s two baskets with a steal and a contested fastbreak score off a feed from Scilingo to put the Rams ahead by six before Fitzgerald’s fouls shots made it 58-50.

Though the final 30 seconds contained more drama than Spring-Ford might have hoped, the Rams know at this point of the season it’s all about advancing to the next round.

“They were making some tough shots, so give credit to them,” he added. “But we came out with the win so that’s all that matters.”

Run to Remember >> Wissahickon jumped from the Class 5A level, where it went to the District 1 semifinals in 2018, to the Class 6A level in 2018-19. The Trojans missed out on the District 1-6A tournament last season and appeared to be headed for another postseason absence early this year.

Wissahickon started out its 2019-20 campaign with five straight losses and after another three-game skid in the middle of the season, the Trojans were 3-9 on Jan. 3.

They responded by winning nine of their last 11 games, including the program’s first victory over Plymouth-Whitemarsh since 2014, in order to sneak into the district tournament, giving seniors Williams, Ostroski, D’Shan Love, Andrew Buck, Justin Rappaport and Alex Richman a final send off.

“They’ve been good friends all the way from middle school coming up through high school,” Wilson said of his seniors. “They’re kids that any chance, ‘Coach can you open the gym? Can we get in and shoot? Coach can we go in and play?’ They play as a group 3-on-3, rough house all the time. They’re just a fun group of seniors. They’re going to be missed.”

Name Tag >> Last season, Spring-Ford lost in the second round of the District 1-6A tournament before climbing its way through the playback bracket to claim the district’s final state playoff spot.

Several of the Rams were part of last year’s state playoff run, but the likes of Noah Baker, Robert Bobeck and Ryan Hagan were the faces of that Spring-Ford team.

Now, the 2019-20 squad will have a chance to leave its mark on the program. A win over Bensalem would send Spring-Ford to the state playoffs in consecutive seasons for the first time in program history.

Timely Shooting >> Spring-Ford junior Nate Santiago had 26 made field goals entering Friday, 22 of which were 3-point makes. After freshman Caleb Little hit a three to beat the buzzer in the first quarter, Santiago hit a last-second three in the third period to give Spring-Ford a shot of momentum and a 46-43 lead entering the fourth quarter Friday. “Whenever I pass it to him he makes it,” Skorcki said.

Rustin storms back to stun Hatters in opening round of Districts
Mercury Roundup (Feb. 14): Hill School, Perkiomen avoid upsets in PAISAA first round