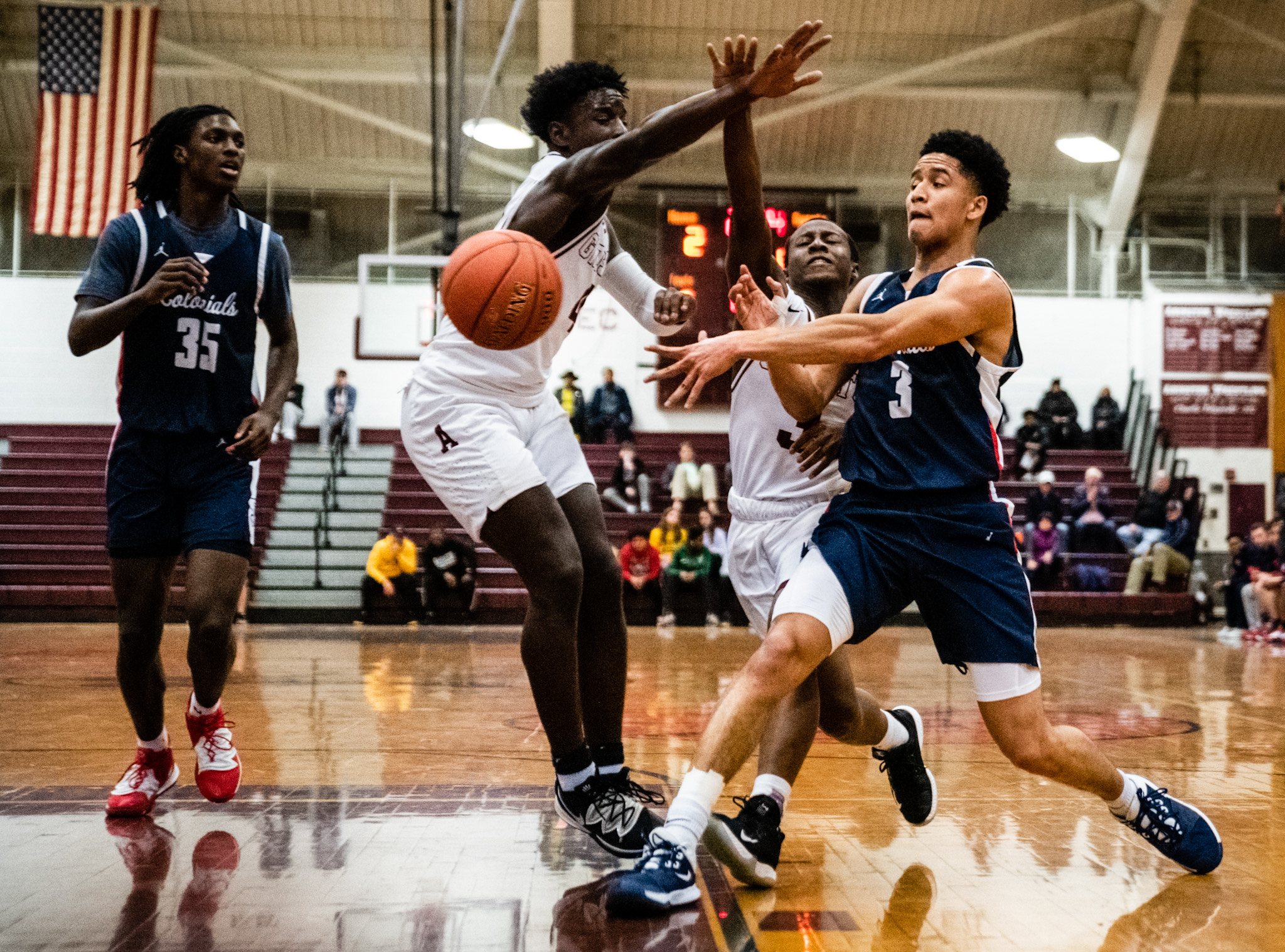 BOYERTOWN >> Plymouth Whitemarsh could not afford to sit back and allow a taller and confident Boyertown team playing on its home court to control the tempo in Friday night’s District 1-6A boys basketball playoff opener.

So the Colonials applied full-court defensive pressure that disrupted the Bear offense early and often, eventually creating 24 turnovers on the night, and survived a late Boyertown rally for a 59-53 win.

Caelin Peters scored 16 and Luke DiCianno 15 for 22nd-seed PW (12-11), which made 14 straight free throws in the final three minutes after the Bears (16-8) had cut the lead from 14 points to four. Aarick Salata scored nine of his 17 points in the fourth quarter and Alex Obarow followed with 14 points for 11th-seeded Boyertown.

“We watched film on them, as we do everybody,” said 6-2 senior point guard Peters. “We knew they could possibly struggle with pressure. We created a couple turnovers and stuck to it.”

“We’re under-sized, playing Boyertown on their home court. They’ve had a great year,” said PW coach Jim Donofrio. “We wanted to play the game as fast as we can with discipline, trying to control the tempo a little bit.”

DiCianno scored the first seven points of the contest on an offensive rebound, a jumper and a 3-pointer from the top of the circle, but the Bears fought back to within 9-7 after one when Obarow grabbed an offensive board and passed to Mason Marinello for a 3-point basket at the buzzer.

The young Colonials, who began the season 3-8, dominated the next five minutes to lead 24-13 before the Bears closed the gap to five on a steal and basket by Salata and a three-point play by Marinello off a fast break right before the half.

PW threatened to put the game away with a 32-18 advantage midway through the third quarter. But the Bears rallied again, this time with a 13-4 run that sliced the lead to 36-31 a minute into the final quarter.

Then the back-and-forth pattern continued, with the Colonials running off nine straight and the Bears countering with 10 points in a row to make it 45-41 with 2:35 remaining. But that’s when the stellar Plymouth Whitemarsh free throw shooting kicked in and Peters finally wrapped up the win with four from the line after a 3-pointer by Salata had cut the lead to 55-53 with 25 seconds to go.

“We had struggled at the line, me especially,” said Peters, who went 8-for-8 from the line down the stretch. “Today I came in with the mindset I was going to make all my shots. Once I made a couple shots, I got a rhythm at the line.”

“It’s basketball. You’ve also got to take into account heart,” said Donofrio. “We knew they were going to fight until the end. No. 5 (Salata) had great heart, knocking down two in a row with a hand in his face. Foul shooting for us was timely. That’s a way to grow up.”

Marinello and Tre Diguglielmo each scored nine for the Bears, who were playing their first district game in four years and trying for their first district win since the 2006-2007 season. David Harris added 10 points for the Colonials, who advance to the round of 16 and a contest at sixth-seeded Coatesville on Tuesday.

“Unfortunately, their pressure really got to us early,” said Boyertown coach Mike Ludwig, whose team turned the ball over 10 times in the first quarter. “That’s not the norm for us. We just haven’t seen pressure like that for 32 minutes. Our kids kept fighting, made some big plays. We got it to four several times in the fourth quarter and couldn’t get over the hump. Give them credit. They came through when they needed to come through.”

The season completed quite a turnaround for the Bears, who went 5-17 three years ago and 8-14 in each of the past two seasons.

“We’re just so proud of this group of seniors, looking where they brought the program from to where it is now,” added Ludwig. “Their off-season work and dedication. I’m so happy for them to get to experience this.”

And PW will try to continue to grow and advance as far as it can.

“We’ve had close games throughout the year,” said Peters. “We try to stay focused, stay calm, try to pull the game out anyway possible. We’ve just been sticking together as a team. We’ve had a lot of young guys at the varsity level. We’re finally getting what the coaches are saying. We just want to keep improving until the final game of the season.”

PAISAA Boys Basketball: Episcopal gives Malvern scare, but falls
Rustin storms back to stun Hatters in opening round of Districts