Owen J. Roberts overcomes Abington in District 1-6A first round 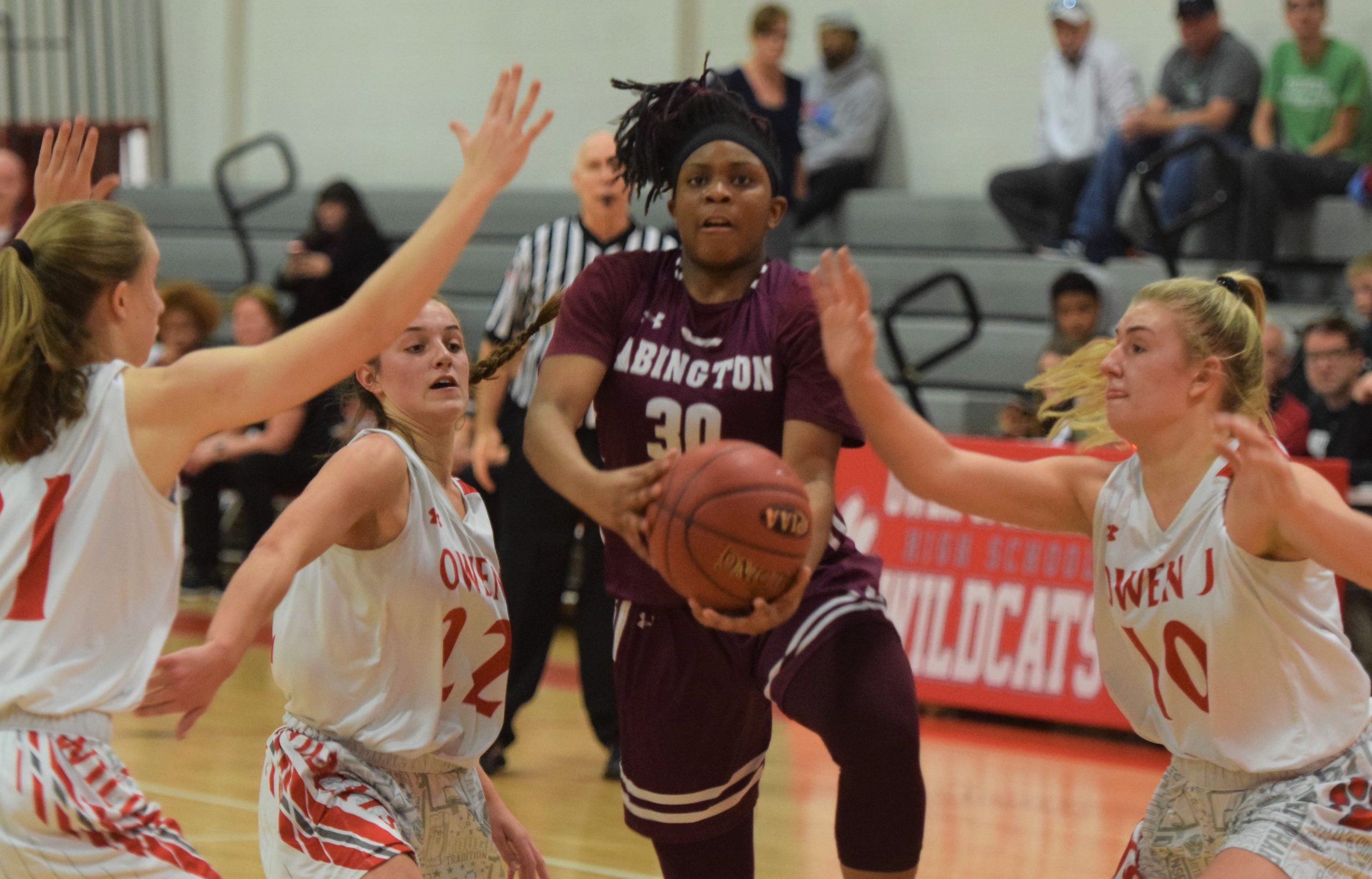 BUCKTOWN >> People around Dan Marsh thought he and his Abington girls basketball team got a favorable matchup in the first round of the District 1 Class 6A tournament. But the highly-accomplished 15th year Ghosts coach knew better: Owen J. Roberts was not to be overlooked.

“When I saw the matchup, I knew it was a tough one. (Owen J. Roberts) is a senior team, physical, they don’t want to lose. It’s come full circle: (OJR) does all the things that we don’t do well … and to go forward we have to take care of our demons.”

Those advantages in defending, rebounding and the dirty details that it takes to win in the postseason carried No. 14 Owen J. Roberts through in a 43-37 victory over No. 19 Abington in a District 1-6A first-round game at OJR Friday night.

Abington couldn’t fully exorcise those demons Marsh spoke of as its season comes to an end at 12-11 and ends a run of six consecutive trips to the PIAA 6A tournament. The underclassmen-led Ghosts got 13 points from sophomore Khalis Whiting and 12 from freshman Cire Worley.

Wildcats overcome tough shooting night with defense to advance and get second round game against No. 3 Spring-Ford pic.twitter.com/On5SLrTMJA

Staying close >> It was a tight game throughout with the end-of-quarter margin being two or fewer in the first three quarters. The Wildcats led 13-7 after its full-court press forced a string of Abington turnovers, but the Ghosts worked back to a 20-20 halftime score while closing with a Krysten Brown putback and Worley 3. Abington led 30-29 after a Jaida Helm putback to close the third quarter, but it proved to be their last lead.

The big run >> Owen J. Roberts took control for good with a 7-0 run in the middle of the fourth quarter that turned a 30-29 deficit into a 36-30 lead following an offensive rebound from Brooke Greenawald (four points) and quick pass to an open Koury under the basket with 4:07 to play.
Abington responded with a 3-pointer from Allison Holden to get within 36-33 with 3:52.

But Koury, most known as a defensive specialist, made her biggest offensive contribution on the ensuing possession, carrying to ball around the 3-point arc, getting a good screen from Greenawald and draining an 18-footer. The Abington defense sagged off of the senior most of the night so her big make felt as important as it proved to be.

“20 (Koury) hit a really big shot,” Marsh said. “20 and 15 (Greenawald) were both hesitant to shoot – and we knew that which is why we played them like we did – but she hit a big one and that’s what seniors do.”

“I missed a few early and there was hesitation about us shooting from 3 instead of trying to get a closer shot. I tried to do that at the end and luckily it worked out,” Koury said.

Open Door >> OJR failed to seal the game at the free-throw line with five straight misses while up 38-35, but were saved by an offensive rebounding effort led by Greenawald and LeClaire.

White ended the drought with a 1-for-2 trip with 43.5 left to make it a two-possession game and allowed OJR to see out the win.

“At the end of the game when they’re missing free throws, we couldn’t fight through, and that’s really our youth and inexperience,” Marsh said. “We’re hoping our freshmen and sophomores can take away from this that we’ve got to come in and make sure this doesn’t happen again. Unfortunately, it’s a tough, but necessary lesson.”

Hard to say goodbye >> With four senior starters in Koury, LeClaire, Greenawald and Hannah Clay, the Wildcats were determined to play another day. They earned at least two more games by qualifying for the second round. The final 16 in 6A will battle it out for 11 PIAA playoff places over the next two weeks.

“Credit to our seniors, they just won’t give up right now,” OJR coach Jeremy Mellon said. “That’s so much of this game, having kids on the floor and in the locker room that are determined to keep playing. That’s half the battle and we have those kids who display great senior leadership.

“I’m really happy for them, they deserve it. They work really hard at it.”

For Koury, a three-sport standout who will be playing lacrosse at Mercer University in the future, it keeps her basketball career alive.

“It feels good because we get to keep the season going,” Koury said. “You never want to say goodbye to a sport. Yeah, I’ll be playing lacrosse next year, but when it’s basketball season that is my focus and I don’t want to see it go.”

They’ll be back >> Though it was just the second first-round exit for Abington in 14 straight trips to the district tournament, with a starting lineup of two freshmen and two sophomores, it’s obvious the Ghosts will be back soon.

“A little bit of inexperience now, but they have so many good parts that it’s going to be tough to play them.”

Whiting showed some of the better ball skills you’ll see, Worley is a promising blend of size and athleticism and freshman Jaidi Helm (5 points) brought the fight in the frontcourt.

“We told them, ‘You’ve got to remember this feeling’ so they’ll learn what it takes. Because we have a lot of talent and the ability to go far,” Marsh said.

Nevertheless, after six straight trips to states – the last two to the PIAA quarterfinals – it’ll be a strange rest of the month for Marsh.

“This is the first time we’ve been done in February in a long time,” he said. “It’s not a good feeling.”

You again? >> Owen J. Roberts will face Spring-Ford for the fourth time this season in the second round. The Wildcats are 0-3 to the winners of the last three Pioneer Athletic Conference championships despite playing Spring-Ford close in both regular season meetings.

“I think that they push us to be better. If we can put our best out there for all four quarters I think we’ll be able to pull through with a win.”