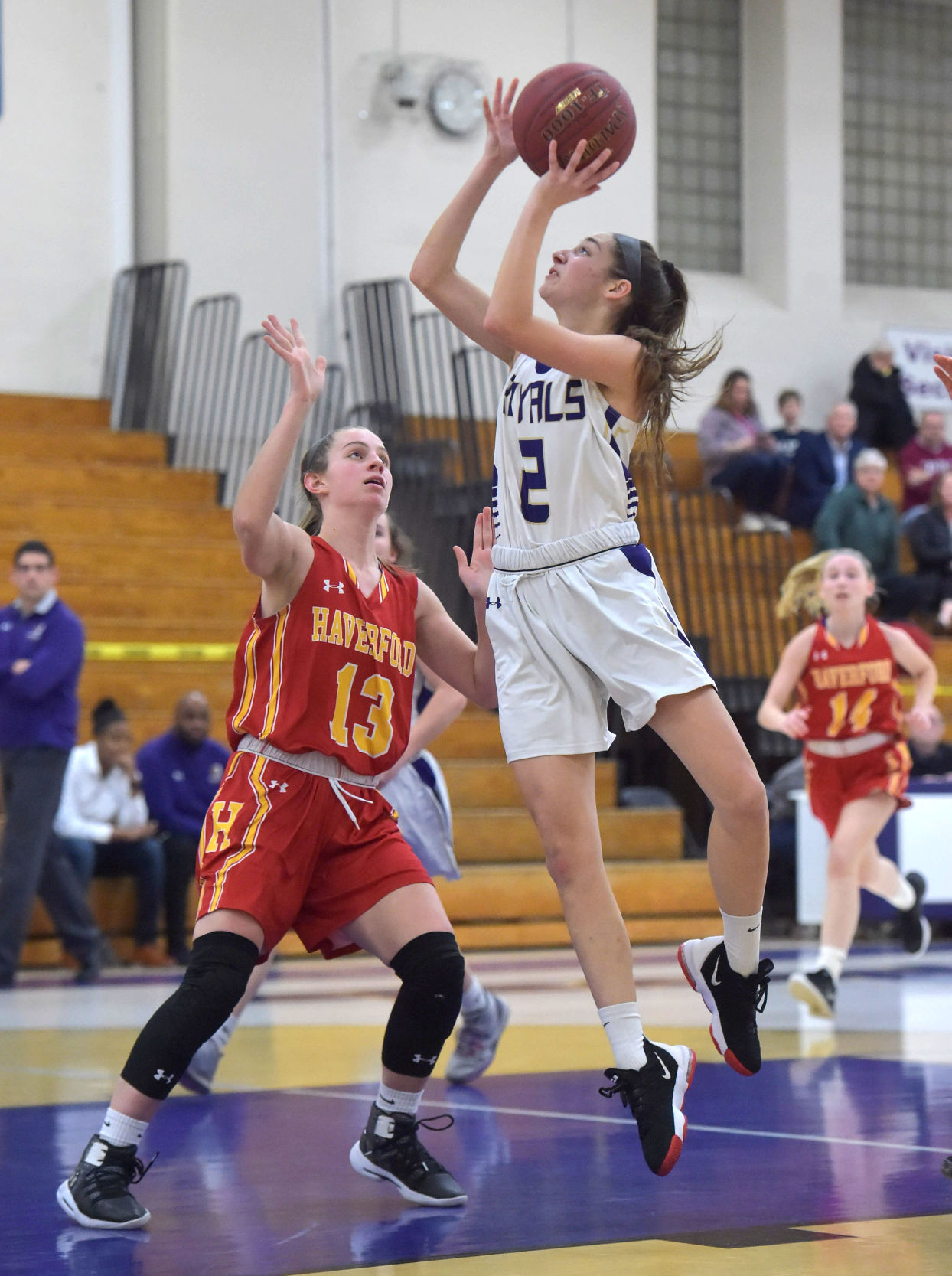 Upper Darby's Gabby Liberio, here hitting a basket against Haverford in the regular season, helped the Royals battle No. 9 seed Downingtown East before falling, 57-51, in the first round of the District 1 Class 6A playoffs. (Pete Bannan/MediaNews Group)

WEST WHITELAND — For Upper Darby coach Nick Liberio, Friday night’s loss to highly regarded Downingtown East in the first round of the District 1 Class 6A playoffs will linger a little longer than others.

Not because the 57-51 setback was a season-ender. Rather it was the glimpse of what the Royals could be as they fought back from a 20-point second-half deficit to close within four points with 1:30 remaining on a pull-up jumper by Gabby Liberio.

The Royals (10-13) were the 24th and final seed in districts. They put a scare into the red hot two-time defending Ches-Mont champion Cougars (17-6), the ninth seed, who bring an eight-game win streak into the second-round matchup with Upper Dublin.

“It’s the resilience of these kids,” Nick Liberio, Gabby’s father, said. “We showed it multiple times this year. At Radnor, being down 20 and losing by one. We showed it fighting back from a nine-point deficit at Academy Park on a tough week. We didn’t execute our game plan in the first half. We executed in the second half.

“The way the girls kept their heads up, played hard, that’s what the Royals are about. Working hard the entire time. I couldn’t be more proud of them for that.”

The Cougars showed their skills in the first quarter as they jumped out to a 14-0 lead. It was more of the same in the second quarter as Bella Smuda, a Liberty University commit, scored all 12 of her team’s points to construct a 31-15 lead at the intermission.

While the 6-5 Smuda tallied a game-high 25 points, she had help as Caroline Brennan and Lauren Kent scored 13 points apiece.

But Gabby Liberio closed the third quarter with a buzzer beater, and Kaitlin Johnson threw a 3-pointer in from the Pa. Turnpike to give the Royals energy. Jasmine Forrester drilled a couple of 3-pointers in the frame, finishing her career with a team-high 15 points. The last one was with five seconds left.

Meanwhile Nick Liberio was coaching up a storm, the Royals skillfully converting set plays after stoppages and setting up their defense as best they could against an opponent that outsized them everywhere.

“At halftime he said we need to be the energy — and we did,” Gabby Liberio said. “I thought we came together. We tried our best and he coached the heck out of that game. I think this shows how much they can grow in the future. We can play, we can compete against this level of team, these higher seeds. If they keep working at it, they’re going to be able to take this to another round.”

The Royals, to be sure, benefited from a lot of missed shots in the second half, particularly at the charity stripe. That’s a concern for Cougars coach Thomas Schurtz, who figures his squad left eight points on the court because it normally converts free throws at a 70 percent clip.

“Girls basketball is exciting, and they made a run with shots,” Schurtz said. “We had a hand in their face with a couple of deep threes and they got some confidence and then we missed free throws. Playoff basketball is about free throws and we missed three front ends of one-and-ones in the fourth quarter. On that run they made we were 2-for-10 with three front ends that we missed. That’s the difference between letting a team hang around and closing the door.”

Despite that, the season finale will stick with Coach Liberio, and for a pretty good reason. It’s something to build on.

“Going into the offseason I know what I have coming up, the athletic ability we have and what we need to work on,” he said. “Will we be able to compete on this level next year? Maybe not. We’re losing a phenomenal player in Jasmine Forrester. We’re losing a floor general in Gabby Liberio. A defensive specialist in Kaitlyn Johnson and a girl who sets a lot of screens and does all the right things in Hanna Asaka. And the girl who probably gave us the most was Sara Sullivan. Those five seniors gave us everything they had, and we needed it. But as we look to next year, I’m excited to keep building the program.”