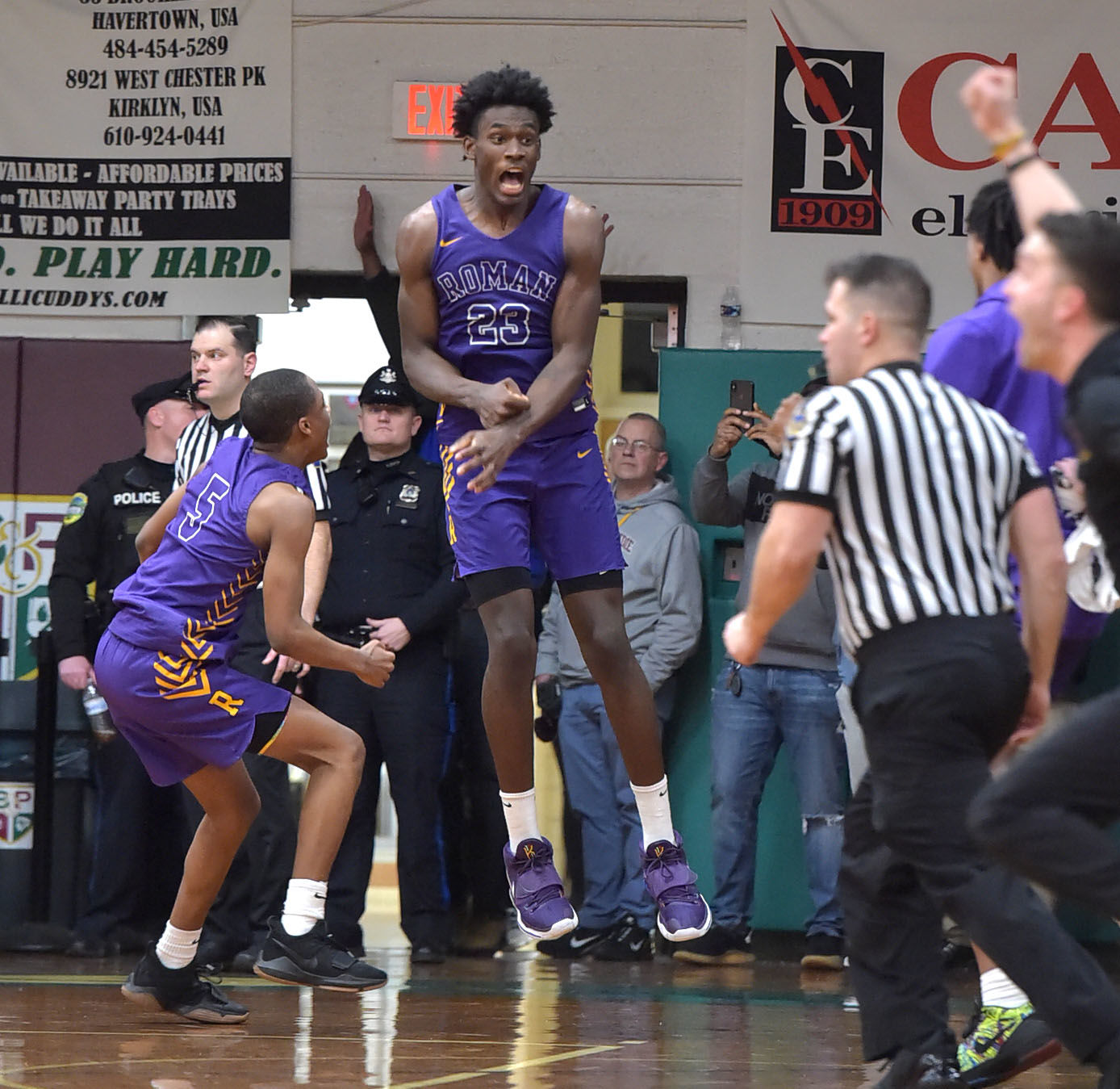 Stunned again in the second half, the Friars recovered and took a lead.

Stunned a third time at the horn … well, that was finally too much.

Literally working hard through the final tenth of a second, Bonner-Prendie was eliminated from the league tournament when Jalen Duren converted a rebound of his own missed shot to give visiting Roman a 61-59 victory.

Bonner-Prendie’s Tyreese Watson hits a three-point basket in the fourth quarter Friday night as the teams see-sawed to an ending that saw Roman Catholic win at the buzzer. (Pete Bannan/MediaNews Group)

Having survived five first-quarter dunks from Duren, and having recovered from a 15-point deficit with 9:38 to play, Bonner-Prendie had a 59-57 lead and the ball in the final minute. But twice in the final 42.3 seconds, each time while trying to hold for a better shot, the Friars turned the ball over. After Roman took possession with 9.5 seconds left, Duren corralled a traffic rebound, missed a short shot, rebounded again and scored on a layup before time expired.

Roman (15-8) advanced to the Catholic League semifinals Monday at the Palestra, where it will face top-seeded Archbishop Wood, a 72-68 winner Friday over Archbishop Carroll. Bonner-Prendie will regroup for a District 12 Class 4A championship game while maintaining hopes for a PIAA championship.

“After the Catholic League playoffs,” Friars coach Kevin Funston said, “it’s hard to get worked up about anything else.”

Both Bonner and Roman were worked up about something when a scuffle broke out in the post-game handshake line. The conflict lasted about 15 seconds.

“I consider it settled,” Roman coach Matt Griffin said. “We are just happy to get out of here with the win. We’re good.”

The Cahillites were outstanding for most of the game, particularly early, when five times they found Duren open in the lane for resounding dunks. The Friars adjusted, fronted Duren for much of the game, and held him to 18 points. Justice Williams led the Cahillites with 20. Lynn Greer had 15 before fouling out with 2:35 left.

An entertaining no-look pass from Nasir Lett to Duren for a bucket gave Roman a 48-33 lead with 1:38 left in the third quarter, temporarily quieting the home crowd. But Connor Eagan deposited a three-pointer to trim the Bonner-Prendie deficit to 48-44 early in the fourth. Eagan’s old-fashioned three-point play with 4:49 left forged a 51-51 tie.

“Our motto here is, ‘Stick together,’” said Eagan, who scored a team-high 14 points. “I love this team to death. We’re in every game. We fight as hard as we can every single game. Tonight, it just didn’t go our way.”

Bonner-Prendie enjoyed 11 points apiece from Oscar Uduma, Tyreese Watson, Donovan Rodriguez and Malik Edwards. James Welde’s free throw made it 59-57 with 1:33 left, but the Friars would not generate another shot.

“They were scrambling all over the place,” Eagan said. “We had to make a quick decision. Unfortunately, the ball bounced the other way.”

Just as the Friars kept their intensity when behind, so did the Cahillites.

“That game could have gone either way,” Griffin said. “We just got that shot at the last moment. That’s the way these games go.”

Indeed, Roman had three shots in the deciding moment, with Bonner simply unable to control one final defensive rebound.

“I was just looking to go crash and I got it. For me, I just want to win. I’ll do whatever I have to do to win.”

Bonner-Prendie dipped to 17-5, but will have more chances to win in District 12 and PIAA play.

For that, there is still plenty of time.