Scannell steps in as starter to pace St. Basil in AACA tournament final 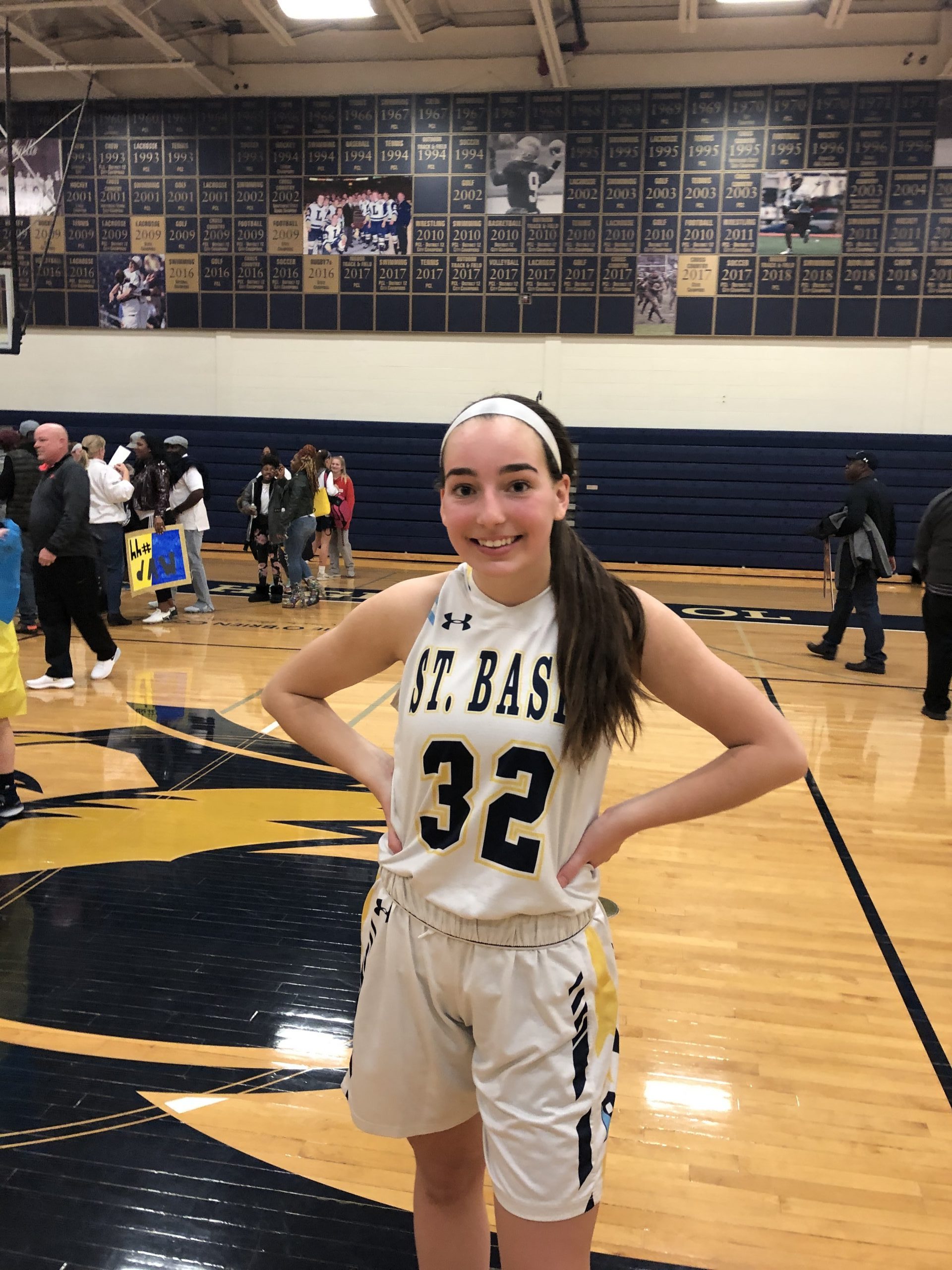 SPRINGFIELD >> Riley Scannell may not have been a starter for 23 games this season, but St. Basil Academy coach Terry Mancini always viewed her as one.

So, when a freak injury in Tuesday’s practice sidelined starter Samantha White for Wednesday’s AACA title game, there was no question who the Panthers would turn to. Scannell, who had about half a practice to switch roles, looked like she’d been in the first five for years.

“It was a little nerve-wracking, but coming off the bench all season got me prepared for it,” Scannell said. “I wasn’t really that nervous once the game started, all the girls helped me through it.”

The junior finished the night with 11 points, nine rebounds, six assists, a steal and block while drawing a charge and chipping several other solid defensive plays.

Scannell played a part in the first 12 points the Panthers scored on Wednesday, assisting four baskets and scoring one herself off an offensive rebound and putback as St. Basil opened a 12-6 lead. She made an extra pass on the game’s opening possession leading to a three from senior Kelly Grant and had a slick behind-the-back bounce pass to Denae Carter for the team’s second score.

Continuity is key for St. Basil and Scannell has played plenty of minutes with the other starters this season, Wednesday was just a little earlier than usual. Mancini chalked up the guard’s crisp passing to her playing point guard with her Mid-Atlantic Magic AAU team and the comfort all the players have in each other.

“They were over-playing a lot, so whenever I would dribble and they double-teamed, I looked to make a quick pass,” Scannell said. “There was always someone open because of the over-playing.”

Scannell’s and-one put St. Basil up 16-10 with 1:28 left in the first quarter as the Panthers’ offense posted 20 points in the frame. She dropped another dish to Carter early in the second and by the half had five points, five boards and five helpers but it was a defensive play that had people talking.

Mount senior Taylor Sistrunk had a full bank of momentum going toward the rim when Scannell stepped in front, took the full force of the impact and drew the charge call for her effort. More than one observer noted they wouldn’t have been so brave but Scannell didn’t think twice.

Scannell said it was the charge senior Kelly Grant took in the first quarter that helped her settle in and she added the crowd’s energy was big behind her. Mancini smiled when Scannell’s charge was brought up.

“Her and Kelly Grant have a competition to see who can lead the team in charges,” Mancini said. “They’re both very good at it and we always talk about it. They’ll sacrifice whatever to help this team win and it was evident tonight.”

Scannell said it’s easy to sacrifice playing for St. Basil, whether it’s stepping in front of an offensive player or in her case, being the first sub in off the bench because every player that has come through the program sacrifices.

Mount ramped up its defensive pressure in the fourth and Scannell admitted she let it get to her a bit, but a quick sub out and talk with the coaches settled her back down.

“All year, I’ve considered her a starter, she’s the best sixth man in our league without a doubt and she’s accepted her role. She gives you so many different things, a jack-of-all-trades if you want to call it that,” Mancini said. “It’s the character of the team, losing a starter and for her to step in, I couldn’t be prouder.”

St. Basil may need Scannell as a starter a few more times this season, with White projected to miss a couple weeks. The Panthers will next try to win a fourth straight District I 3A title and move on to the state tournament.

“It really boosted my confidence because I wasn’t aware I could help my team that much,” Scannell said. “I’m really proud we could get the win, get it for Sammy and continue our league season undefeated.”

Every championship is sweet, but each passing year has gotten better and better as Scannell has taken on more of a role with her team. Wednesday was no doubt the best, only because she had so much to do with it.

“Freshman year, I didn’t go in a lot, last year I went in a little more but I knew this would be my year to prove to everyone I could help my team win,” Scannell said. “It feels pretty good we got it done for the fourth year in a row.”

After the game, the All-AACA recipients were honored on the court with Carter taking home league MVP honors.