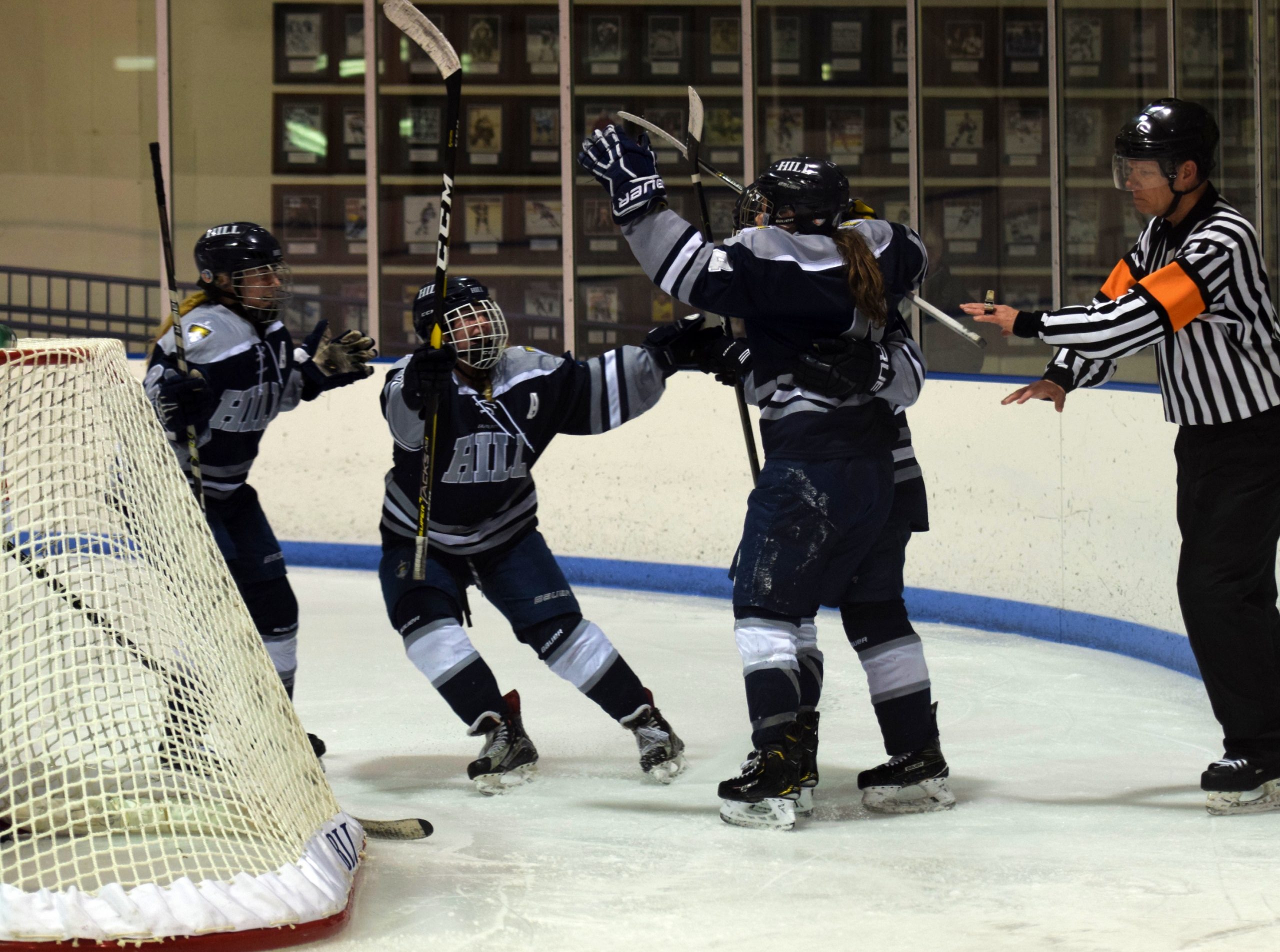 POTTSTOWN >> The Hill School’s girls hockey program has ascended into a powerhouse thanks to sacrifice and relentless determination. Both qualities made the difference in arguably the biggest win of the season Wednesday.

Lindsey Coffey poked home a rebound 1:57 into overtime to break a scoreless tie and send the Blues to a 1-0 victory over archrival Lawrenceville at Hall-Eccleston Arena.

For Hill (15-2-3), it marks the third straight season without a loss to their archrivals (3-0-2 over that time), quite the feather in the caps of coach Ari Baum and everyone who’s had a hand in building a top program since Baum’s arrival in Pottstown in 2012.

“No matter your record — even if you come into the game 0-19 — it’s a big deal when Hill meets Lawrenceville,” said Baum.

Ciarrocchi centered from behind the net to a rushing Hower, who was soon joined at the post by Coffey. As the duo battled Lawrenceville goalie Devon Cole (32 saves), Coffey’s final effort pushed the puck across the line.

“It’s our last home game, against Lawrenceville,” explained Coffey. “I had my family here watching, we just wanted this game so badly.” The game-ending effort wouldn’t have been possible without the work of senior goalie Ryann Busillo, who earned her second shutout of the season, turning away 25 shots in all and thwarting perhaps Lawrenceville’s best chance with just over a minute to play in regulation.

The Blues enjoyed a two-player advantage thanks to consecutive Lawrenceville penalties, but as the power play wound down, a turnover resulted in a sudden Lawrenceville breakaway that Busillo was able to knock aside with her left pad. It was like that much of the afternoon with Hill controlling the puck for large stretches only for the Big Red to suddenly create an opportunity on a counterattack. Busillo was equal to the task each time.

“First of all, Lawrenceville impressed me with their gameplan and how hard they played,” said coach Baum. “But Ryann was a huge difference in the game. She’s really turned the corner this past month or so with her confidence — she’s had several elite starts in a row.”

Busillo‘s record as a starter for the year improved to 9-1-3.

“I train myself to be ready for anything,” said Busillo. “You have no choice as a goalie. I struggled with that when I was younger, until I learned about the importance of keeping absolute focus throughout the game.”

A scoreless first period saw Hill in control of possession, with Lawrenceville able to mount some productive counter-rushes, including the period’s best opportunity, a backhand-forehand attempt ably turned aside by Busillo. Each team killed a single minor penalty, with shots in favor of Hill, 12-7.

Allie Corser-James nearly opened the scoring for the hosts early in the second stanza but was turned away at the doorstep by Lawrenceville’s Cole. A much more even period in terms of puck possession nearly yielded a payoff for Lawrenceville with about four minutes remaining, but Busillo was able to turn Devan Morey’s initial shot and deflect the rebound just out of reach. Shots on goal, while still in favor of Hill, were much closer at 10-9 for the period. The third period was highlighted by numerous Hill scoring chances, culminating in the extended two-player advantage but quickly followed by Busillo’s game-saving effort on the breakaway. It set the stage for Lindsey Coffey’s heroics in the extra period, cementing a third straight year without a loss to Lawrenceville, a perennial power in girls’ hockey.

This senior class (fourteen of 22 rostered players graduate this year) may be the one that puts the Hill School in that category. Currently ranked No. 8 among New England prep teams, the Blues’ challenging schedule pits them against top programs from the New England Prep Athletic Council (NESPAC) and the Women’s Ice Hockey League of the Mid-Atlantic (WIHLMA).

While Hill is obviously not located in New England, they’ve played enough of the powerhouse programs of that region to merit consideration in the rankings.

“The value to not being in a specific league,” said Baum, “is that no one game becomes the game. But Lawrenceville is obviously special.”

The Hill School is not a full-fledged member of the NESPAC or WIHLMA, rendering the Blues ineligible for the postseason. But while Wednesday’s victory over Lawrenceville may ultimately be a season highlight, it’s far from the final act.

Despite no postseason, the Blues have seven games remaining, and a 7-0 record would give them a school record for victories in a season.

More important than any school record, however, is the continued slow, steady building of the program Baum has reestablished. Busillo, originally from New York City, is one of 11 Hill players who come from out of state.

“We cast a very wide net,” said Baum. “We want to be the best, but we also want kids who see themselves as more than hockey players.

“We have players who are used to traveling to play hockey, used to sleeping in hotel rooms. Our team has traveled over 6,000 miles this season — these kids have had to sacrifice, and I think that translates in these tight games.”

Not every Hill player travels a great distance to be at the school, however. Senior captain Liz MacMurray, a Pottstown native, says the school itself and the culture were enough for her.

“The opportunities are amazing,” she summarized. “Over my four years, I’ve had a great opportunity to see our program grow to this point. We travel to play the best teams up in New England — that’s not an opportunity I’d have elsewhere.”