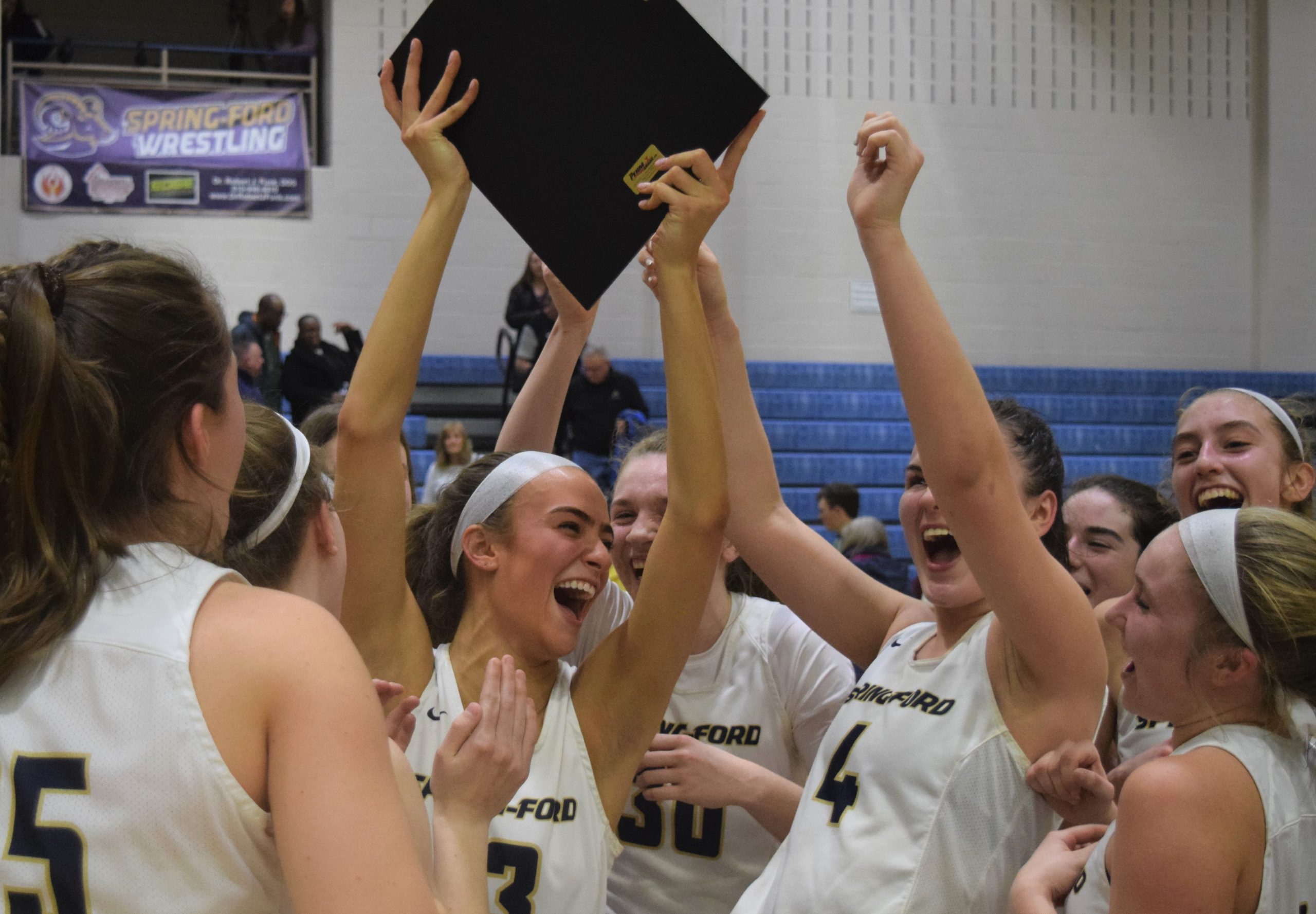 Spring-Ford senior Skylar Sullivan had been on the championship stage before. Twice in fact, helping the Rams to Pioneer Athletic Conference title game wins over the previous two seasons.

That didn’t stop Sullivan from having a bit of nerves early on as Spring-Ford tried to make it three straight on Wednesday night against Methacton — the only PAC team to defeat the Rams this season.

A third straight title was something Sullivan and fellow seniors Gabs Alessandroni, Alyssa Yuan, Emily Coyne and Rachel Rutkowski wanted to add to their legacies before they left the school.

As they did in their previous two tries, the group helped Spring-Ford power its way to another league title, defeating Methacton 47-39 and clinching the first PAC threepeat since the Rams’ squads in 2012, 2013 and 2014.

“I’m not gonna lie to you, I was a little nervous just because of the PAC jitters, but it was exciting,” Sullivan said.

Rams coach Mickey McDaniel has seen this level of sustained success in his program before. Spring-Ford won three consecutive titles from 2006-08 and then accomplished the feat again from 2012-14.

A difficult schedule, a strong defense and deep, balanced rotations are all key elements in this Spring-Ford team’s and other squad’s success when they get to the postseason.

More than anything, however, is each senior class’s mission to best the group of girls who came before them.

“They wanted their legacy to be minimum winning three PAC championships,” McDaniel said. “You saw the way they played tonight. They just had that desire to want to win a championship. They also know it takes a team to do it. It’s not just a senior class.”

Junior Lucy Olsen had 14 points to go along with 10 rebounds and junior Abbey Boyer knocked down a trio of 3-point shots to help the Rams seal up their third consecutive league crown, but the contributions of the Rams’ senior class could not be overlooked on Wednesday night.

Sullivan had 11 points and seven rebounds, and Yuan finished with six points and 10 boards. Alessandroni finished with two points and two assists, but her lone bucket a midrange jumper to close the third quarter felt like a critical moment in the game, extending the Rams’ lead to 16 points entering the final period of play.

“Unfortunately it’s my last year, but I wanted to put out the best effort I possibly could,” Sullivan said.

The Rams’ seniors have helped the program combine for a 31-1 league mark over the past two seasons. That record against PAC opponents is 35-1 when postseason games are included.

As have teams in the past, the group seemed to rise to the occasion on the PAC’s biggest stage, defeating the Warriors 55-41 last year and controlling the game from the second quarter in a nine-point win Wednesday night.

“We’ve been playing together since travel league,” Alessandroni said. “We’re all really used to each other. In practice, we’ll really stress on what this team will play us in and we’ll really focus in on it. When we play together, it all just comes together for the game.”

For now, this Spring-Ford senior class is set to leave the program tied for the most PAC titles by any group in the school’s history. They know the group behind them will have its eyes on supplanting that mark.

“That’s huge for us, I’m pretty sure setting a school record,” Alessandroni said. “The junior class if they win next year, that’s a school record too.”

“There is that pride factor where the seniors want to leave here with three consecutive championships, which ties a school record,” McDaniel said. “The underclassmen they want to win one every year they’re here.”

Methacton’s Sydney Hargrove and Spring-Ford’s Alyssa Yuan go to the ground for a loose ball in front of Spring-Ford’s Abbey Boyer during the PAC final.(Austin Hertzog – MediaNews Group)