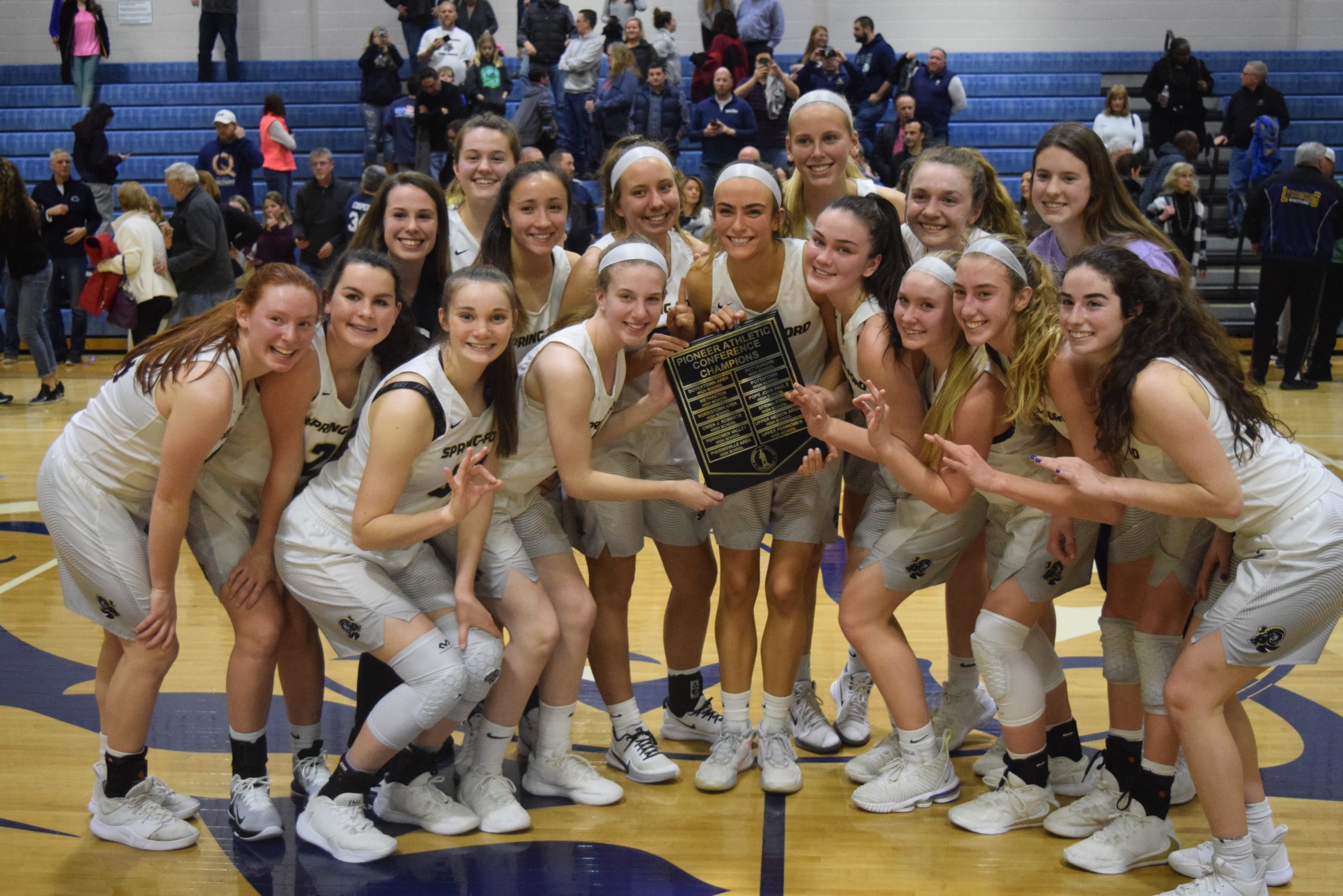 ROYERSFORD >> The Spring-Ford girls basketball team always seems to elevate its play when the playoffs roll around.

The Rams did it again on Wednesday night as they won their third straight Pioneer Athletic Conference championship, 47-39 over Methacton at Spring-Ford High School.

Methacton had won 12 games in a row, including a 42-39 overtime decision over Spring-Ford early in the streak to split the regular season series.

“I think we came out with a lot more energy,” Olsen said comparing this game to the last one between the two squads. “We played smarter, harder and more as a team. We really wanted to execute and be aggressive.”

The Rams broke a 15-15 tie with a 15-4 run to take a 30-19 halftime lead and that advantage never dropped below ten until the final minute.

“The No. 1 goal coming in, we had to win the rebounding war,” said Spring-Ford coach Mickey McDaniel. “We’ve been working really hard on that, just going and getting the ball. We had 20 offensive rebounds. Rebounding was our key coming in and we accomplished that.”

Spring-Ford wound up with a 39-26 overall advantage on the boards as Olsen and Alyssa Yuan each grabbed 10 rebounds, with eight of Yuan’s coming at the offensive end.

Methacton turned the ball over on its first three possessions, but trailed only 2-0 at that point and took its second and last lead of the night at 6-5 on a 3-pointer by Cassidy Kropp. Then the Rams ran off seven points in a row, but the Warriors came back to tie at 13-13 and 15-15 early in the second quarter.

That’s when Spring-Ford began its decisive run on a trey from the top of the circle by Boyer, followed by a pass from Mac Maloney to Olsen on a fast break that resulted in a three-point play. Boyer hit another 3-pointer during the run and Sullivan nailed one from the right wing to close out the first half scoring.

“I think our energy was really high, trusting each other, hitting shots,” said Olsen. “We were just playing really well.”

Lucy Olsen plus the foul has Spring-Ford ahead 21-15 with 3:49 to go in first half. pic.twitter.com/fzIqOJKD7M

“The energy from the bench was really up,” said Sullivan. “That set the tempo for the game. We had to work with their zone. We learned from our mistakes in the last game.”

The Rams had 10 assists on their 11 baskets in the first half.

“We just came together and played our hearts out,” said Boyer. “We pushed the ball up the floor and played as a team, getting open and getting it into the post and kicking it out. Just moving the defense.”

Spring-Ford boosted its lead to 43-27 by the end of the third quarter, which turned out to be enough of a cushion after failing to score for the first 5:13 of the final period.

“What killed us was we worked hard to get back to 21-17, then a 12-4 run killed us,” said Warrior coach Craig Kaminski. “That’s what they’re good at, the game within a game. Credit to them. They always elevate their game in the playoffs. Just overall, we were very flat on defense. And the offensive rebounds, we got killed on the glass. You’ve got to execute against them.”

The Rams have now won nine titles in 10 finals appearances since the PAC playoff format began in the 2005-2006 season. Methacton has made it to the championship game seven times in the last 11 years, but is still looking for its first championship.

“Unfortunately, it’s my last year,” said Sullivan. “I wanted to put out my best effort. We just worked really well together.”

“There is that pride factor,” said McDaniel. “The seniors wanted to leave with three consecutive championships. There is a passion and desire to accomplish that goal.”