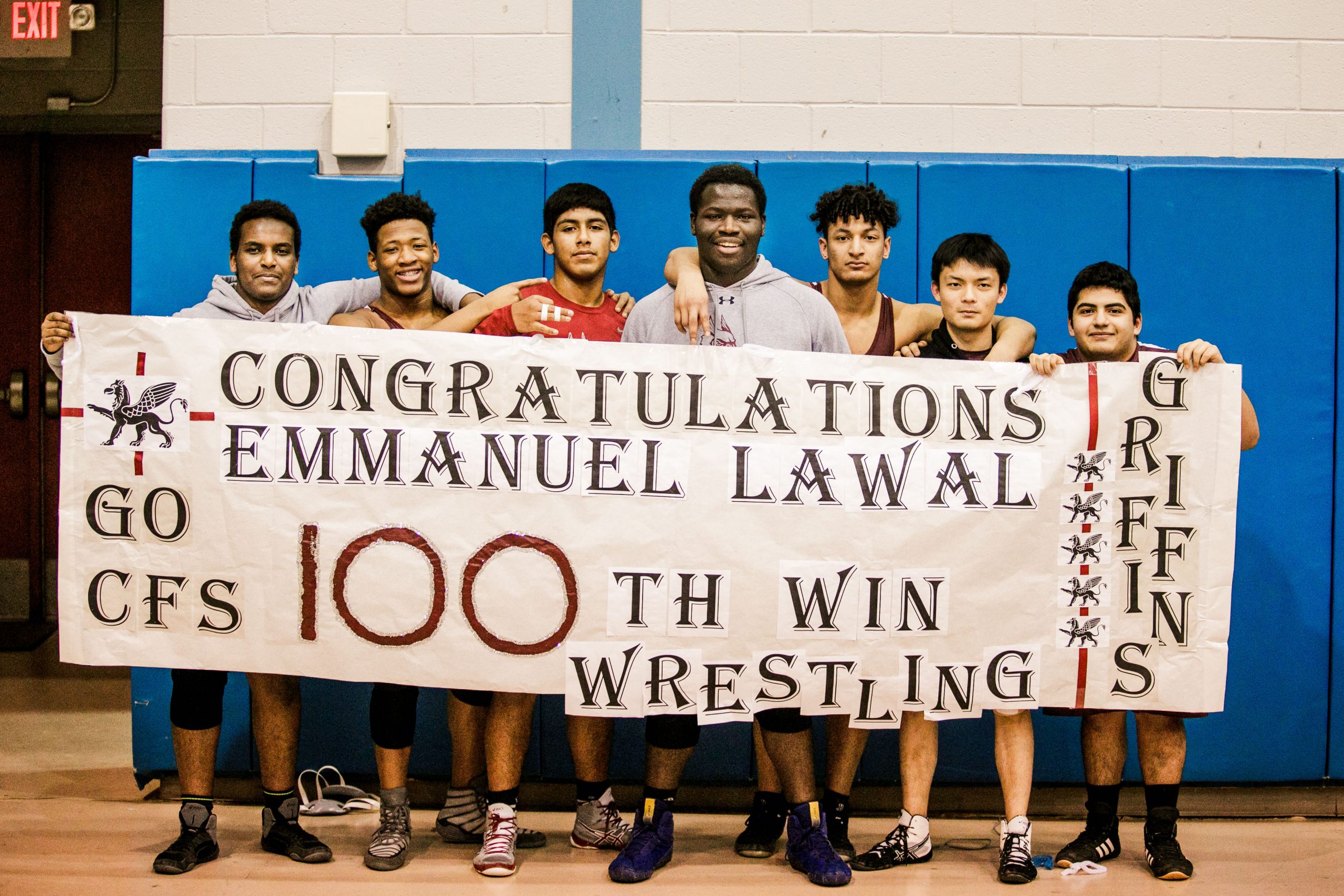 EXTON >> Following a first-period pin, Church Farm senior, Emmanuel Lawal, rocked back on his knees and took an exasperated breath.

Moments later, Church Farm students swarmed the big heavyweight, jumping up and down around a beaming victor.

In the final match of the night, Lawal capped his final dual meet with his 100th career win.

The fall made it a one-point dual, but Coatesville walked away the winner, 37-36, in a non-league contest. Regardless, it was, indeed, Lawal’s night.

“We don’t really have a lot of home matches, but when we do our classmates support us, no matter if we wrestle good or bad,” Lawal said. “Having a big crowd to share this moment, it made it extra special.” Church Farm’s Emmanuel Lawal closes in on a pin against Coatesville’s Chris DeShields at 285 pounds, with the fan section waiting to erupt. (Nate Heckenberger – For MediaNews Group)

A year ago, Lawal became the first state medalist in Church Farm history, placing eighth in the Class 2A tournament. Wednesday, he became the fifth Griffin to reach 100 wins, and just the second since Church Farm joined the PIAA in 2008.

“All the years, putting in the time, all the duals, the guys still here motivate me to wrestle to the end,” Lawal said. “Getting my 100th, it feels like all that hard work and time, on and off the mat, paid off, and that’s what I really like about it.” Emmanuel Lawal is surrounded by Church Farm students after he won his 100th career bout. (Nate Heckenberger – For MediaNews Group)

Sebastian Corrales, a 2019 graduate, won 111 career bouts, which is attainable if Lawal can make another deep run in the postseason. That is the school-high, since joining the PIAA, but the overall record is 121.

“I think it’s a major undertaking,” Church Farm coach Art Smith said. “We don’t wrestle Christmastime because the kids have break, so you have to win a good amount of matches. At this school, with this level of competition, 100 wins is impressive.” Coatesville (4-12) won the dual thanks to some wrestlers at the other end of the win column. Brandon Perez (126 pounds) scored late to push his seventh career win to a major decision, and Michael Windle (152) trailed 4-3 before pinning Louis Marca for his first career win. Windle had a win by forfeit earlier in the season, but after being pinned 16 times this season, the sophomore couldn’t help but run into the stands and pass out hugs to friends and family.

“You never know when the work is going to pay off,” Coatesville coach Jeff Bowyer said. “You can work hard for a year or six years and you never know when that one match is the turning point for your career. I don’t know if that’s a career match for (Windle), but I’m proud of him. He’s worked hard and he’s a good example of if you keep working hard, good things happen.” The Red Raiders had to forfeit two weights, but got pins from Christian Ruiz (106), Nate Lucier (120), Jacob McBride (145) and Brett Fick (195), who returned after missing nearly a month due to injury.

“I’m happy for the guys to get a win,” Bowyer said. “The kids we have in the lineup, there’s a lot of first year kids, so experiencing a win at the end of the year is good for them. … We talked to the guys all year, about how giving up forfeits throughout the year would be detrimental, as a dual team. We stayed positive and worked on getting better, and by our last dual meet, we’re focused and ready for the postseason, where anything can happen.” Coatesville’s next competition will be the District 1-3A Section West tournament, next Friday and Saturday at Oxford High.

Oscar Calle (138) and Ronald Valencia (220) joined Lawal as pinners for the Griffins, while Sebastian Chiesa (113) and Kwadwo Onyinah (160) earned decisions on Senior Night.

“They’re great young men and great leaders,” Smith said of his seniors. “They make no excuses and work hard. Win or lose, they always get after it for us.”