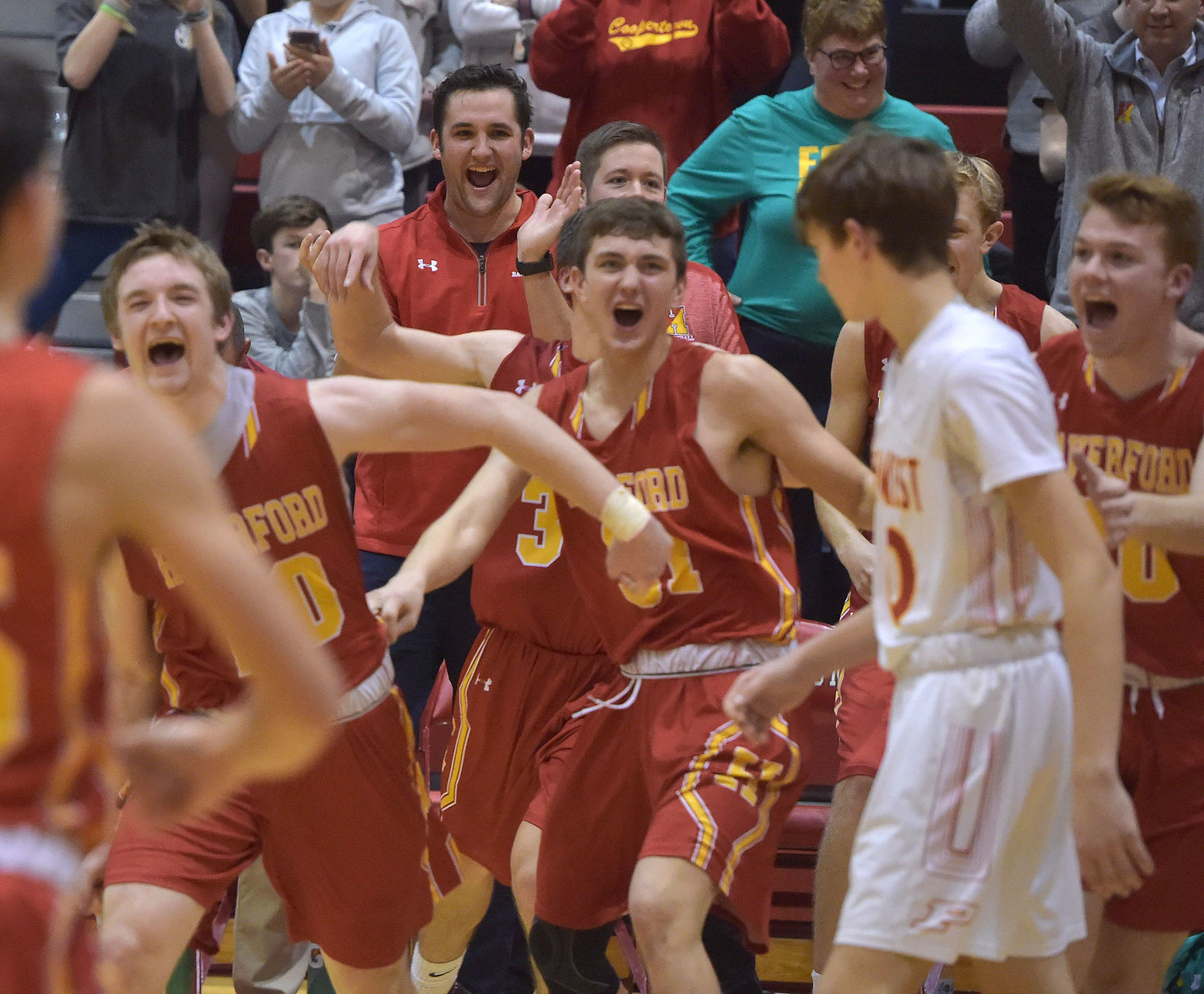 LOWER MERION — It was just 28 days ago that Haverford retreated to its locker room to face what it hoped would be rock bottom.

The Fords had just been beaten by three points at home by Harriton, a sixth straight setback and eighth loss in 10 outings to overshadow a 4-0 start. More devastating still, those six losses were by a combined 16 points, comprising five overtime sessions, two in a two-point defeat to Penncrest Jan. 9.

Those woes seemed remote as Sean Reynolds and his fellow Fords climbed the ladder at Harriton Tuesday night to snip down the nets. From 2-7 in the league in early January, the Fords are Central League champions for the first time since 1970.

And the resilience it took to traverse that distance, more than anything else about these Fords, is undoubtedly championship caliber.

Tuesday’s was a rare game in which the Fords didn’t have to sweat to the last second, clearing the bench in the final moments of a 49-40 win over No. 3 seed Penncrest.

That makes 10 straight wins for the Fords (16-8), including a clean sweep of the last rotation of 6A teams in the league and a pair of wins over top-seeded Garnet Valley. Beating Penncrest was the final statement of faith in the bond that kept the Fords together when the going got brutally tough.

“We had our coaches on us every day, telling us that we need to stay together, we’ll get through this and we’re going to be a great team,” Reynolds said. “ … We just knew we had to pull through. We knew it was a rough patch in our season. But I think that made us who we were.”

The fourth-seeded Fords are, it turns out, an immensely special group. And if that needed any elucidation, then Tuesday’s boxscore provides it, in which leading scorer John Seidman was limited to 1-for-8 shooting and four points. It mattered not one bit, thanks to the peculiar gravitational force the junior seems to exert, drawing defenders and leaving his teammates unguarded. The bargain of a team-first mentality that dragged Haverford from its depths says that when presented with chances, the Fords have no qualms about taking them.

That was Hunter Kraiza’s role Tuesday. The junior canned three 3-pointers in the second quarter, fashioning a 22-18 edge at the break. He added three makes in the fourth, including consecutive possessions to provide the decisive 8-0 run, turning a 33-30 game into an insurmountable 42-30 bump.

“After I hit my first two 3s, I knew it was going to be one of those nights,” Kraiza said. “I was just feeling my shot and everything.”

In what has become typical Fords fashion, Kraiza was quick to deflect credit. And the recipient was Seidman, who posted team-highs in rebounds (nine) and assists (three).

“It’s amazing having John on the court because everyone’s focused on him,” said Kraiza, who scored 20 points. “He could go off for 25 points and we could win, or he can drop 10 assists and we’ll still win. Everyone’s just attracted to him and he’s a great player to play with.”

Haverford’s Hunter Kraiza goes up for a basket in the second half of the Central League final Tuesday. (Pete Bannan/MediaNews Group)

It wasn’t a one-man show. Reynolds took the initiative in the first half with seven points, getting to the basket with regularity. He entered averaging just 2.1 ppg this season. Sophomore Nick Colucci tallied 12 second-half points, including a pair of 3-pointers. The Fords were 8-for-19 from 3-point range, Colucci and Kraiza accounting for all of the makes on just 12 attempts.

“I think we just have this feeling that anyone can do anything on any given night,” Reynolds said. “We have 12 guys on our team who can all play. One night it can be Nick, one night it can be Hunter, next night it’s John. It changes every night.”

“It was really frustrating because you couldn’t help a lot,” Penncrest forward Denzel Atkinson-Boyer said. “Or if you helped, they just hit it. And they had some lucky roll-ins, but that’s basketball. Shots are going to hit.”

Penncrest (19-5) never sustained an offensive rhythm. Twenty-four hours after upsetting arch nemesis Lower Merion for the first time in 11 meetings, they got just two total points from Marquis Tomlin and Aidan Carroll in the first half, the latter sitting with foul trouble. It’s the third straight year Penncrest has lost in the final.

The Lions required six points from Saahir Lee and two 3-pointers from Ben Stanton to into halftime down just four. An Atkinson-Boyer bucket put Penncrest ahead briefly at 24-23 in the third, but Colucci’s first 3-pointer made it a 30-27 game after three, and the Fords scored 12 of the first 15 points of the final stanza to put the game away.

Atkinson-Boyer paired 11 points with nine rebounds, three blocks and three steals. Lee had 11 points before exiting on an awkward foul under the basket with two minutes left; he left the court holding his head and didn’t return. Tomlin and Carroll finished with just three made baskets and 11 total points, and frigid performances from 3-point range (3-for-14) and the line (14-for-25) didn’t help.

That wouldn’t do the job against a team like Haverford, one that’s proven its depth and its steely resolve.

“It felt like we were the underdogs the whole entire way and everyone doubted us,” Kraiza said. “But it’s a really great feeling.”