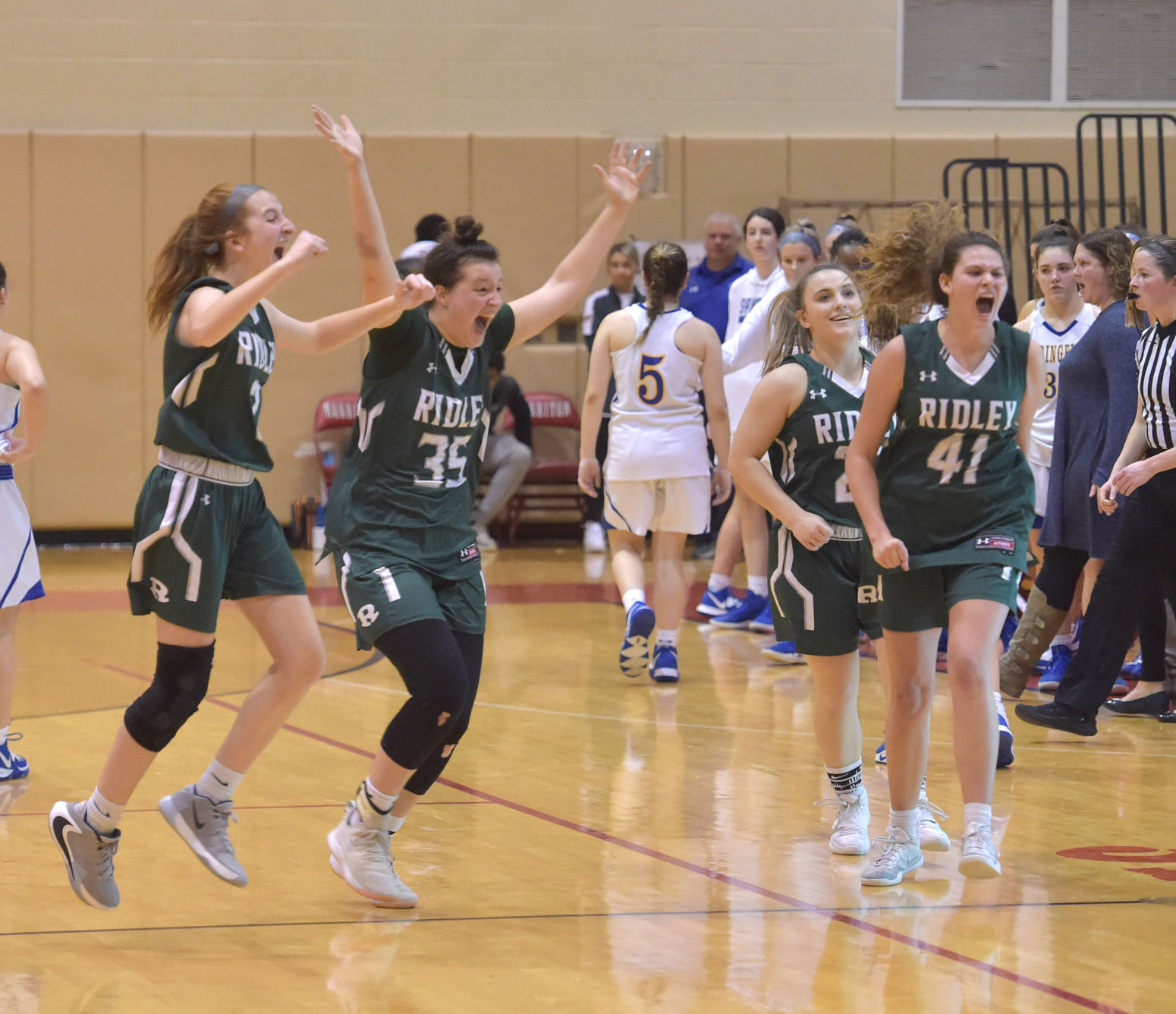 The 52-40 victory over Springfield for the Central League championship Tuesday night at Harriton was quite an emotional experience for the Green Raiders.

For years, the Green Raiders were no better than a middle-of-the-pack Central League team. They often were overmatched against the league’s elite.

After going 9-13 last season, the Green Raiders are champions. They have earned a first-round bye in the District 1 Class 6A tournament.

They proved again Tuesday that they are for real.

And that explains why Hinchey was so teary-eyed when she was looking for anyone – coaches, teammates, fans, family members – to embrace.

“It’s because we never got the respect that I feel we deserve and now we have finally shown that we are the best team in the Central League,” said Hinchey, who produced nine points, six rebounds and a pair of steals. “Everybody has contributed all year and we practice every day of the week — well, except for Sunday – and we go out and we work our butts off every single day.

“We finally got what we deserve.” Falcone fought back tears when discussing what this team means to her. If there was a coach of the year award in the Central League, you’re looking at her.

Inducted into the Delco Athletes Hall of Fame in 2010, Falcone was a two-sport star at Ridley High and Dickinson College. She returned to her alma mater last year as an assistant coach and was at the helm of one of the most impressive year-to-year turnarounds in recent memory.

“I knew that this team would be good and, to me, it’s about the hard work and the belief in each other,” Falcone said. “Just getting everyone to believe in each other, because we knew we had the talent. And to be able to stick together, like a true team, and never let a moment get too big … to get that experience, and to see them put in the hard work to get here, that’s what is special to me.”

The Green Raiders matched the Cougars fire with fire in the opening minutes. Hinchey said “there was no way we were losing to Springfield again,” and she was correct.

In their regular season meeting last month, the Cougars showed their championship pedigree by winning in blowout fashion. Ridley was one of Springfield’s 17 consecutive Central League victories.

The Green Raiders didn’t want to have the same experience twice. They came out and balled Tuesday night. Senior guard Dakota McCaughan, a first-year Green Raider after spending three years starting at Bonner-Prendergast, was amazing. She went toe-to-toe with Springfield sharpshooter Alexa Abbonizio in the first half. McCaughan and Abbonizio each put up 10 points in a wild first quarter.

“I feel like they were trying to slow it down, especially after that first quarter, and we were trying to speed it back up,” McCaughan said. “We were going back and forth. I think once we started to get in transition and started hitting and running on them, I think that’s when we took off.”

The Green Raiders hit the switch when they fell behind nine points at the start of the third quarter. Abbonizio swished her fifth and final 3-pointer to make it a 31-22 Springfield lead. Springfield made only one more shot from the field the rest of the way.

Ridley went on an 11-0 run, sparked by a Lindsay Boyd 3-pointer. McCaughan hit a step back triple to put Ridley ahead, 33-31. Rachel Conran dialed long distance to give Springfield the lead again, then Hinchey made a sweet low-post move and layup to propel Ridley back in front.

“I felt like the first time we played them, we were all really nervous. It was the first time many of us were in that situation, with a crowded gym and everything,” McCaughan said. “We knew what we had to do and we went out and did it tonight.”

Ridley held a four-point cushion at the start of the fourth quarter. Springfield turned the ball over on two of three possessions and the Green Raiders pounced on the mistakes. Meanwhile, Ridley shot a cool 9-for-15 from the field in the second half.

Madison Chapman had a steal and then dished to Mackenzie Griffith, who was fouled in the act of making a layup. Griffith finished the three-point play to give Ridley a 43-34 lead. Ridley’s Shannen Hinchey puts up a shot in the first half against Springfield.

Kylie McNicholas, Boyd and McCaughan combined to hit five free throws down the stretch to seal the win. The Raiders got a big boost from sophomore Shea McNamara, who gobbled up seven rebounds.

“I feel like when I find my groove and I can connect with the girls, it really helps my confidence and I feel great,” McNamara said. “To contribute in any way is great. I like to help the girls score as much as possible.”

After halftime, Ridley’s mix of zone and man defense limited Abbonizio to six points on 1 of 5 shooting from the floor. “I joked with them today that, when we played them last month, we were like a completely different team,” Falcone said. “At that time it felt like I was speaking a different language, that it wasn’t resonating, but tonight they were listening and they were hearing. I kept telling them, ‘hear my voice, hear my voice.’ And when you got a floor leader like Dakota, it really helps.”

Ridley has a well-earned day off Wednesday before going back to work later this week. They will host a District 1 Class 6A tournament game next week.

“It was our goal at the beginning of the season and to accomplish this, it’s just insane,” McCaughan said. “It really means a lot to all of us.”